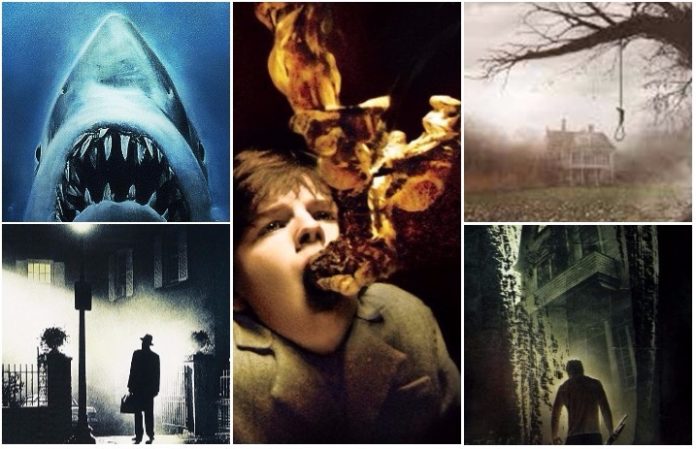 Horror movies are always 10 times more frightening when prefaced by the words “based on a true story.” Be it gory or paranormal, the thought that the events you’re witnessing on the big screen actually happened will haunt your dreams at night. Since some of the best and most famous horror flicks of all time are based on real life suffering, it’s time you learn the truth. What’s scarier: Fact or fiction?

Astoundingly, the real life inspiration behind some of the most terrifying characters in all of horror — Leatherface, Norman Bates (Psycho), Hannibal Lector (The Silence of the Lambs) — is one, single man. Wisconsin born and bred Ed Gein was a deranged serial killer who was active in the 1950s. After killing his female victims, he would use their skin and bones to make furniture and clothes, from bed posts to coats. While he didn’t live in Texas and there are no reports that list a chainsaw as his weapon of choice, the gruesome activities Gein engaged in were definitely represented by the gory classic.

The real Ed and Lorraine Warren

Love this one of Ed and Lorraine!

Posted by The Demonologist: The Extraordinary Career of Ed and Lorraine Warren on Saturday, January 24, 2015

The Warrens are two of the world’s most famous paranormal investigators. So much so that their purported experiences with spirits have inspired huge horror hits, such as The Amityville Horror, The Haunting in Connecticut and The Conjuring.

The opening scene in The Conjuring 2 actually recalls the time when the Warren duo investigated the infamous Amityville horror house. The real-life Ed and Lorraine arrived on the scene shortly after the Lutz family moved out of the house, just 28 days after purchasing it. Some families wait years before finally deciding to move out of a haunted house. So what was so extreme about the Amityville house that chased an entire family out in less than one month?

One of the grisliest murders in American history occurred at the New York home in 1974, when Ronald Defeo shot and killed every one of his family members. He has said that voices motivated him to commit the crime. A year later, the Lutz family moved into the house for a very low price. They would soon regret it, as they started experiencing strange and inexplicable phenomena. The stepfather, George Lutz, would wake up every morning at 3:15 (just as the film portrays), which was the exact time of death ruled for the Defeo family. Levitation, disgusting smells and even slime oozing from the walls were just part of what the Lutz family claims to have endured during their 28 days in the house. Indeed, when Ed and Lorraine Warren appeared to investigate, accompanied by reporters, they were thrown by unseen forces to the floor. Further research also showed that the property was once an Indian burial ground and a place where people had practiced black magic and the occult.

Since these real life experiences, many movies have been made concerning the infamous house, representing the “true story.”

The Haunting in Connecticut

There has been a lot of speculation about whether the Snedeker family, who lived in the house that inspired The Haunting in Connecticut, have been truthful; but supposedly the story goes like this: Like in the movie, the eldest son of the Snedeker family had cancer and his mother decided to rent a house nearer to his hospital. Also portrayed in the movie, the home the family ended up renting used to be a mortuary. The Snedekers say that they were dealing with terrifying ghosts on a daily basis, and that these entities especially afflicted their ill son. Ed and Lorraine stepped in at one point to investigate the activities in the house and witnessed spiritual forces physically harming the family. They also claim they found information that one of the previous workers at the funeral home committed necrophilia in the house, which was most likely what made the lingering spirits so angry. Fact or fiction? You decide. But the son’s cancer apparently really did go into remission after the family finally left their haunted house.

In the early 1970s, the Perron family called upon the Warrens as they were plagued by dozens of spirits in their Rhode Island home. According to the eldest Perron child, Andrea, the family that owned the property before hers spanned eight generations, and nearly every death on the property was violent or self-inflicted. The evil spirit of the witch Bathsheba in the film was actually based on a spirit in the home of the same name. Like in the movie, the “real life” Bathsheba was apparently hell-bent on causing the mother of the Perron family misery, as the spirit felt threatened by her station as woman of the house. The Perron family finally left the infested home in 1980. Upon the movie’s release, Variety called The Conjuring, “A sensationally entertaining old-school freakout and one of the smartest, most viscerally effective thrillers in recent memory.” Based on the history, it’s obvious why.

All good things start at the Jersey Shore, right? Well in the year of 1916, almost any news was bad news when it came to the summer vacation hotspot. There were five fatal shark attacks that year along the Jersey Shore and even further inland at Matawan Creek. The attacks fueled headlines everywhere and caused absolute terror, as no one ever thought a Great White would make its way to NJ for human meat.

The Exorcist is practically horror movie gospel. Whether you’re a fan of the classic film or not, you can’t deny its impact on the horror genre. Nine priests and 39 other people claimed to bear witness to the real life exorcisms of “Roland Doe.” (This particular case was so horrific that the child in question has not been referred to in any written account by his given name.) And yes, that is exorcisms, plural, because at least 30 of them were reported to have been performed on the boy before he was finally free of whatever it was that was afflicting him. Smashing vials of holy water, speaking in a deep, gruff voice that was not his own and furniture flying across rooms by itself are some of the events that teams of religious officials said they experienced surrounding the boy. Doctors and psychologists at the time could not find anything clinically wrong with the boy (though, it was 1949). After an incredible amount of effort, “Roland Doe” was apparently finally freed of his suffering, and went on to lead a completely normal life.

The Girl Next Door

Like Texas Chainsaw Massacre, The Girl Next Door is a film without spirits or demons. Rather, it is based on the undeniably true and sickening story of Sylvia Likens, who was tortured and murdered in the ’60s. She was just a teenager when she finally died after incredible abuse. Put into the care of a seemingly trustworthy neighbor by her father, who wasn’t able to take care of his children at the time, Likens had no idea what torment awaited her. The neighbor, Gertrude Baniszewski, singled her out amongst all of the other children, calling her a whore and constantly torturing her for being “promiscuous.” Famously, Baniszewski went on record as saying the girl “needed to be taught a lesson.” The woman burned, starved and sexually violated Likens; all acts that would ultimately kill her. Baniszewski also reportedly made the other children in her care participate in the torture and watch. A truer hell is hard to imagine.