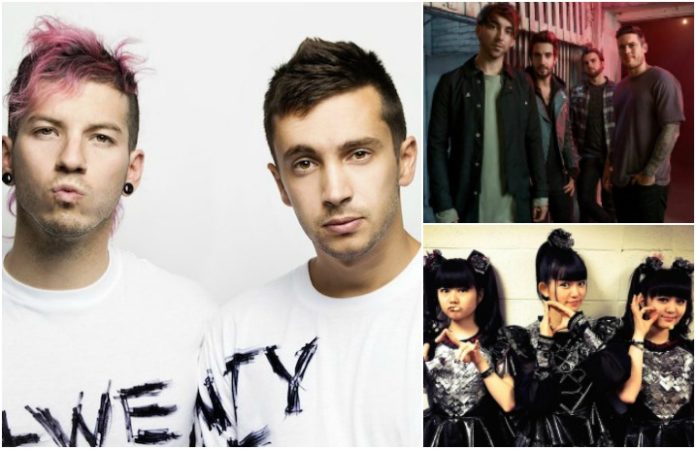 Coming up with a band name is no easy task. You want something catchy, something that will stick out and set you apart from other bands in your scene. So how did some of the most iconic bands in our scene such as All Time Low, Panic! At The Disco and Blink-182 come up with their names? We've gathered the origins behind the names of some of your favorite bands, and some of them may surprise you.

Check out these 22 bands and the stories behind their names, below!

While on tour the band saw a building that had a sign with most of its letters fallen off, leaving it to read “Doors Down.” At the time, there were only three members in the band, and ended up calling themselves 3 Doors Down.

Vocalist Matthew Healy once said in an interview that he came up with the name after seeing a date inside an old art journal that read “June 1st, the 1975.” Healy thought the placement of the word “the” was rather intriguing, and the name stuck.

Malcolm and Angus Young came up with the band name after their sister saw “AC/DC” on the side of an electric sewing machine, and ended up asking, “Why not AC/DC?”

“It came from the old drummer, Bobby,” explains guitarist Kevin Skaff in an interview with Spin. “This was a long-ass time ago back in Ocala, Florida—probably 2003. Bobby had this girlfriend, and she just randomly blurted the name out during a practice of something. I remember everybody being like, ‘It sounds pretty cool, maybe we should use that.’ The funny part is that we ended up kicking Bobby out like two shows later and keeping the name. Maybe that’s not so funny, but he was a pretty bad drummer.”

Loosely derived from the book Ishmael where the author looks at the world from an animal's perspective to critique human culture.

According to the band's producer, Kobametal, the name came to him by revelation as a play on the words “heavy metal.”

Originally called Duct Tape, the band changed their name to Blink but soon faced the threat of being sued by an Irish band that had the same name which ignited the switch to Blink-182. The band likes to switch up the story as to what exatly the 182 stands for, stating everything from the movie Turk 182 to the number of times Al Pacino says “fuck” in the movie Scarface.

The story goes that the band's vocalist once knocked over a microphone owned by the club owner during a show. The club owner made a statement about Benjamin breaking his microphone, and the band took the name.

“It’s a slight change of a line from Pirates Of The Caribbean,” explains lead singer Oliver Sykes in an interview with Spin. “Right at the end of the film—it might even be the very last line—Johnny Depp says, ‘Bring me that horizon.’ That was really inspiring. I was still living with my parents in Sheffield, England, when the movie came out [in 2003]. For me and the band, playing music was always wrapped up with the idea of touring and traveling and seeing the rest of England and the rest of the world. We never thought doing that was possible, but that’s what we wanted to do. So that quote sort of stands in for our feeling of wanting to see what the planet had to offer.”

The name refers to a line in one of the band's very first tracks, “The Sharp Hint Of New Tears,” which goes “On the way home, this car hears my confessions.”

Our beloved boys of FOB began playing early shows without having fully decided on a band name. The band went through a list of names during a performance, where one fan yelled “Fuck that! You're Fall Out Boy!”