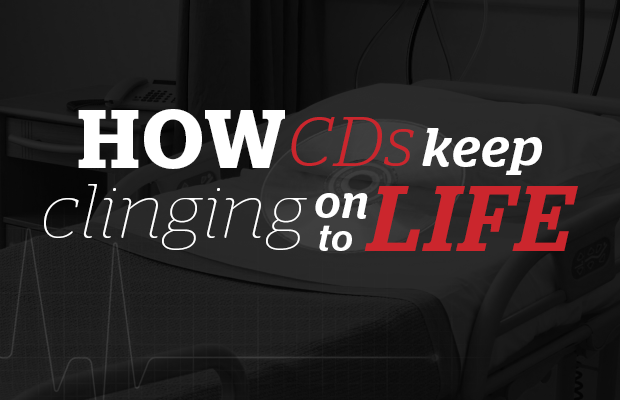 Whether it’s Starbucks finally giving up on pushing them over their counters or Wal-Mart chopping their inventory in half, every few months we see another sign that points to the disappearance of the CD. But are they really as close to death as everyone says they are? As we approach the 30th anniversary of the compact disc’s ascent to popularity, the music press talk as if they are already gone. But the facts seem to tell another story.

While many joke that it’s only parents who are still buying CDs of their favorite old fart acts (Neil Diamond, Susan Boyle or if they’re really cool, Adele) it simply isn’t true. In 2014, Taylor Swift, Sam Smith, One Direction, Lorde and Beyoncé were all in the top 10 best-selling CDs of the year. The only CD that had sales in the Top 10 that were clearly driven by your parents was Barbra Streisand. Let’s not forget it was only last year that digital sales overtook CD sales on a regular basis.

Jake Round of Pure Noise Records (the Story So Far, Four Year Strong) says, “Our most established bands who have a solid presence at retail sell a great amount of CDs, our developing bands who are still up and coming are very digital and vinyl based.” A fact I see echoed again and again: The cool, up-and-coming bands have success with the vinyl and digital that the die-hard, hip music fans buy. Whereas larger groups who sell to a wide range of people, including those who aren’t avid music fans, see sales percentages that skew more towards CDs. John Cafiero of Misfits Records tells a story that shows proof of this demand, “When we released a new Misfits single only on vinyl and digital download, many fans complained that they wanted a CD version.”

While we are already three popular generations of formats past the compact disc (Napster-era MP3s, iTunes download and streaming music services), why are listeners still clinging to what many of us feel is a jurassic, inconvenient technology? Upon polling my Twitter followers, I saw a common thread––fans still buy CDs to listen to in their car. With cars seeing their longest average lifespan ever (10.8 years to be exact), this begins to make sense. The vast majority of cars on the road still have CD players built in, whereas AUX inputs for iPods and smartphones have only been standard in manufacturing for the past five years.

Regardless of car stereo playing preferences, Apple phased CD drives out of their computers each year, and took a huge step into streaming music recently. You probably laugh if you see anyone holding a Discman in 2015, since you figure they really don’t take their music listening seriously. But just because someone uses CDs, doesn’t mean that he or she isn’t an avid music fan. Let’s remember that while vinyl is way cooler with great artwork, it is often more than double a price of a single CD. With a CD, you still get a physical representation of the music you love, but in a more cost-effective format.

While I doubt we’ll ever see a CD resurgence in the same magnitude as our present day vinyl revival, I could be wrong. Cafiero tells a funny story: “I recently gave a promo CD of my band, Osaka Popstar, to a couple of twenty-somethings who reacted as if it was a rare collectible, the way people used to react when seeing vinyl—before the big resurgence. One of them even said, ‘This is great, I actually still have a CD drive in my laptop too!’” The fact is, many formats evolve even well into their twilight years. As an example, Pure Noise Records recently started including download cards in their CD releases.

But is this really so bad? Since it takes 87 plays of a song via a streaming service to equal the same revenue as a single CD purchase/iTunes download, CDs give musicians a surefire way to fill their pockets. While part of me wants the world to get hip to streaming services, at this point anything that is profitable for bands should be celebrated, no matter how antiquated. alt