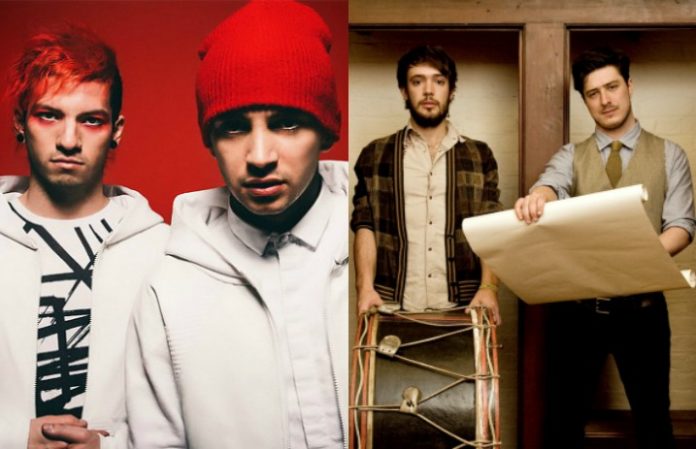 Once there was a time where Tyler Joseph was fascinated by what it took to get one of his songs on the radio. But that was before the Twenty One Pilots frontman learned how twisted some of the machinations behind radio are. “The time we were opened to that world is when we talk to other bands. People who are great people, amazing musicians. Then they release a new song, and I’m like, ‘That’s not them. I’ve been on tour with them for months, that’s something they would not do. That’s where we’ve seen it the most, honestly.” When it is suggested those artists drank the Kool-Aid, Joseph adjusts the metaphor, replacing “drank” with “served.” “They weren’t given a choice. They were painted into a situation where they were going to get shelved or a plug was going to get pulled, by people in control who think they know [what works].”

In the days when Joseph and his drummer/musical foil Josh Dun were trying to get potential labels to sign them, all kinds of industry types had opinions about the duo’s electronic, keyboard-driven pop. Talking to Joseph, most of the “experts” were completely off the mark. Consider “House Of Gold,” the track from 2013’s Vessel, best described as Joseph’s take on Americana, a ukulele-driven track written as a loving tribute to his mother. More than one industry wag only focused on that song, because the biz thought they were seeing (wait for it) the next Mumford And Sons.

“After the success of Vessel, there was an awareness of how the industry worked,” remembers Joseph. “I wanted to make sure I didn’t overcompensate for that when writing Blurryface. There was that moment where it looked like ‘House Of Gold’ was going to be the single that was going to represent who we are. That was the song all the labels said, ‘That’s the hit, let’s do this.’ That was one of the most frustrating parts of our journey. This was a song that I wrote in a parking lot out of love and it made sense on a record. But to make it a flagship of what we’re trying to do doesn’t make sense. All that stuff—Mumford, Lumineers, Of Monsters And Men—was hitting hard back then. Fortunately, we had enough people who understood what we were about and said, ‘The song is good, but it’s not the full experience.’”

“This was a song that I wrote in a parking lot out of love and it made sense on a record. But to make it a flagship of what we’re trying to do doesn’t make sense.”

While Blurryface did maintain Joseph’s concerns about real life and the world at large, the album does have a big push-back moment. Although he wouldn’t publicly use this vernacular, the reggae/jungle/dubstep amalgam “Lane Boy” is the duo’s fuck-you song. It’s about shaking off other people’s expectations (and demands) about where the duo’s place is in the business, possibly the greater scheme of where they fit in today’s music culture, period.

“I describe ‘Lane Boy’ as the moment where I broke character,” Joseph says. “Saying things that weren’t necessarily artistic or beautiful, but exactly what I wanted to say and exactly what I was feeling. I broke character and became a frustrated human. For a moment. I don’t imagine needing to say things like that anymore. I remember showing that song to some people and they said, ‘I don’t think you want to say that…’ And Josh said to me, ‘Let’s say it.’”

Twenty One Pilots are neither punks nor pushovers for what the industry allegedly “knows.” With the success of Blurryface well on its way to certified Platinum sales, it’s readily apparent Joseph and Dun know what they’re doing. And in their typical contrarian mindset, they may be the only band who feel absolutely no pressure to maintain hit album sales.

“Looking forward to the next record, I feel a greater sense of freedom and less pressure. I felt a lot more pressure going from Vessel to Blurryface. It didn’t happen the way [industry people] talk about it. There wasn’t a massive single [from Vessel] that projected into the pop charts. What we did was still different from their formula. Because it got beyond a certain point, I feel so much confidence that I can look at those people and look at myself and say, ‘I know what we’re making is for a group of people out there that want to hear it.’ That’s all the confidence I need.

“I’m looking forward to what an even more confident Twenty One Pilots record sounds like,” he resigns. “I’m not saying the songs will sound confident, I’m saying the song structures will. Lyrically, the songs will always be the same reason why I started writing them in the first place—to say things that I felt I couldn’t say in a regular context.”

Watch more: The anti-influences of Twenty One Pilots