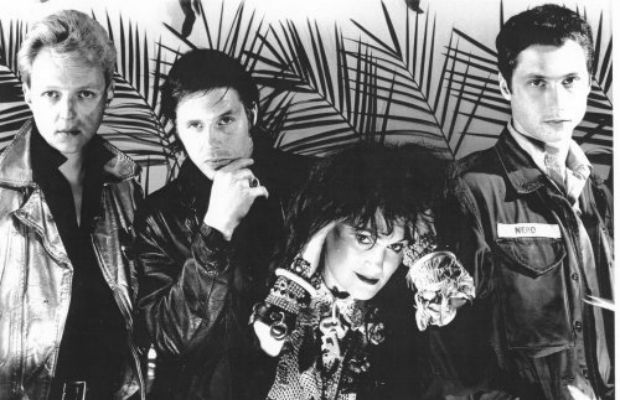 The Los Angeles band X, recipients of the Icon Award at the 2015 APMAs, were a staple of the late-'70s Los Angeles punk scene. The quartet––vocalist Exene Cervenka, vocalist/bassist John Doe, guitarist Billy Zoom and drummer DJ Bonebrake––played all of the cool clubs (the Masque, the Whisky a Go Go, Madame Wong's) with L.A. staples the Go-Go's, the Alleycats and the Dickies. “The best parts were the sense of community, in the first two to three years [of our existence],” Doe told AP. “Everybody did something within the world of punk rock, whether it was a magazine or art. There was a lot of creativity just whizzing around.”

Yet Doe also stressed that the idea of punk meant something much different musically when X were first starting out. “At the time, punk rock meant anything that wasn't classic rock, so there was a lot of diversity,” he says. “That opened the door for us to try something that sounded like Ben E. King. A song like 'Adult Books,' an early X song, had that influence.” Indeed, X's early albums, especially 1980's Los Angeles and 1981's Wild Gift assimilated many different, indelible influences in addition to early punk: hot-rodding rockabilly, '50s rock 'n' roll, classic country, even hints of dense hard rock. (Witness the churning “Nausea,” which features screaming organ from the album's producer, the Doors' Ray Manzarek.)

“We were all students of Americana,” Doe says. “We all grew up with all that stuff on the radio. [The] '70s psychedelic bands and then the more roots-influenced groups that came after that, they did the same thing. But we still [had] the advantage of hearing all that same stuff and including that in our music.”

Along with this reverence for history, X possessed a strong work ethic and heaps of ambition. Doe laughs that, early on, the band “rehearsed three to five nights a week for just a handful of gigs,” which served them well when they started touring heavily outside of California.

In fact, Cervenka notes that as X grew, they “networked like crazy. I mean, college radio held the whole thing together, and independent radio. But it's a crazy thing to think that in 1980, we could play Milwaukee and 800 people would show up, and there was no airplay. There was a little bit of media from college radio, but there was no internet. How did people know? They didn't see pictures of us. They didn't even know what we looked like.”

X's music connected with audiences so strongly because the band focused on emotionally rich, resonant songwriting that was poetic and vibrant. Their early songs were chronicles of the characters and scenes they saw in Los Angeles and beyond, while their major-label debut, 1982's Under The Big Black Sun, was incredibly poignant: The LP featured songs on which Cervenka addressed her beloved sister's death, and how she grieved this loss. X's restless creativity and refusal to be crammed into one genre only became more pronounced as their music became more sophisticated and (slightly) slicker on (and especially after) 1983's More Fun In The New World.

1985's Ain't Love Grand and 1987's See How We Are embraced contemporary production and a broader palette of sounds. The former's “Love Shack” is almost funky and hip-hop-influenced, while See How We Are, on which the Blasters' Dave Alvin replaced Billy Zoom on guitar, features “4th Of July,” a melancholy, Alvin-penned alt-country gem. In fact, X's status as an influential band within alt-country tends to be downplayed, but very early on, the group (and their more stripped-down, acoustic-leaning side project the Knitters) reinforced the inextricable link they made between punk and classic country.

In the late '80s and early '90s, X––now featuring guitarist Tony Gilkyson in place of Alvin––continued to innovate. In a weird twist of fate, the band's cover of “Wild Thing” was featured prominently in the 1989 baseball movie Major League, while their last studio record, 1993's underrated Hey Zeus!, brims with bright power-pop and rock. Either way, both underscored the enduring genius of X: The band never conformed to trends or expectations, and their music keeps incorporating more nuances and inspirations. In fact, the band's concerts these days, while certainly as energetic and ferocious as ever, are still evolving. Not only has X been performing their first four albums in a series of residencies––which has entailed learning to play some songs live for the first time ever––the original lineup of Cervenka, Doe, Zoom and Bonebrake bring their unique non-X creative and life experiences to the band.
The gloriously uncategorizable results embody the original, mainstream-flouting, unpredictable spirit of punk. “[X are] four people who all had different musical backgrounds, who appreciated all kinds of music, both American music and international music from all different eras, and brought individual, original versions of the instrumentation that they play,” Cervenka says. “And it all worked together. You had Billy playing a Chuck Berry riff, and DJ playing Buddhist marching band drums, and me being a complete wild child from 1970, never being in a band, and John being a great singer-songwriter and a great bass player. You throw that all together.

“A lot of bands, they focus on the lead singer. They focus on guitar or something,” she continues. “[It's] four individual, intelligent people bringing a lot of different things and making a new sound out of it, rather than all playing one thing.” alt