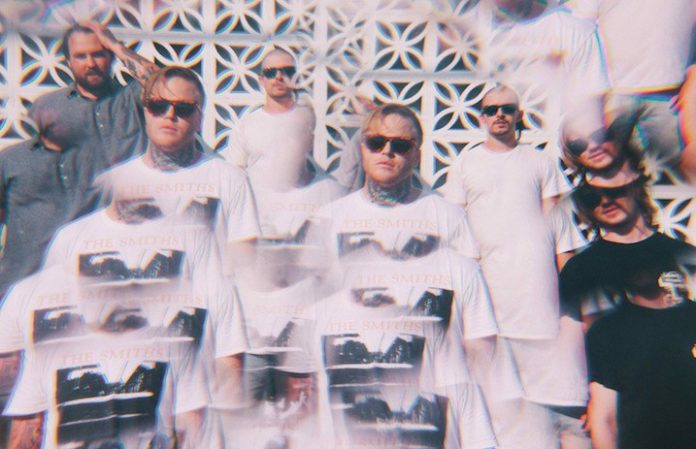 Are you the same person you were two years ago? Five years ago? Seven? As we’re all well aware by now—or at least should have some inkling—change is inevitable. Choosing to move forward isn’t always easy, but in order to thrive, it’s usually the only option. Air out your past and dive in.

South Carolina rockers Hundredth have a new album coming out, RARE, and there’s lots of talk about the record’s evident style change compared to the group’s previous work. Once termed a melodic hardcore act (or even just hardcore, or maybe metalcore), the band have undergone a sonic renewal: They’re now making a type of shoegazing indie rock that wouldn’t sound out of place coming from a smoky pub in the Thames Valley 1990s, as opposed to the strains of DIY punk born of ‘80s D.C. basements and SoCal VFW halls.

Far from being a part of “The Scene That Celebrates Itself,” however, Hundredth are following their own muse. As comparisons to sonic trailblazers Catherine Wheel, Chapterhouse and even the Jesus And Mary Chain get thrown around (or just a doltish, “This sounds like My Bloody Valentine”), the band—frontman Chadwick Johnson, guitarist Alex Blackwell, bassist Andrew Minervini and drummer Lee Hutchison—are carving their own way, informed by those post-punk influences and propelled by their HXC upbringing.

While, admittedly, RARE is a surprise on first listen, it really shouldn’t be; Hundredth have been chasing an intangible aura since their 2008 inception. Initially a spiritually charged hardcore derivative, the group found their voice on 2011’s Let Go, obtained a social consciousness on the Revolt and Resist EPs, and made their defining statement in the milieu on 2015’s Free. It’s from Free’s launch pad that we find ourselves in orbit, joining the band in the stratosphere, learning that we could feasibly be what that album title promised.

There was nowhere to go but up. Johnson, Hundredth’s voice in style and song, seems to have known the trajectory all along. “And now I see it/There’s no freedom in bottling it up and hiding it/So I air it out,” he wailed on Free’s “Inside Out.” RARE is the result of that freedom, and they’re airing it out. From the new album’s supernova opener “Vertigo,” through the darkwave epistle of “Down,” to the album’s best track, the apparent anti-pharmacology ode “Grey,” Hundredth are ascending the crest of important, lasting rock music.

After the first few singles from RARE were revealed, the band admitted they’d painted themselves into a stylistic corner after Free. “We had nothing left to give without rehashing the same shit,” Johnson said. RARE isn’t as much a choice for the quartet as it is a necessity of invention. The group have matured, and they don’t want to dupe you, the listener, by releasing Free 2.0. If you’re a fan of Hundredth’s old material, the least you can do is listen. If you listen, you’ll likely understand—and even possibly appreciate.

On “Departure,” RARE’s closing number, Johnson apparently foretells the outsider sneering at Hundredth’s profound transformation. Likening their precarious turnaround to that of an old flame, now snuffed out, the singer intones, “Sad truth/The judges rule/On who you used to be/Not what’s new.” In a scene that prides itself on being different but rarely is, the band’s willing metamorphosis should be admired, not condemned. “We’re not the same/The smoke pushes out.” The first spark is gone, the flower burns, a new torch alight.

Hundredth’s RARE is exactly that, and the scene is all the better for it.