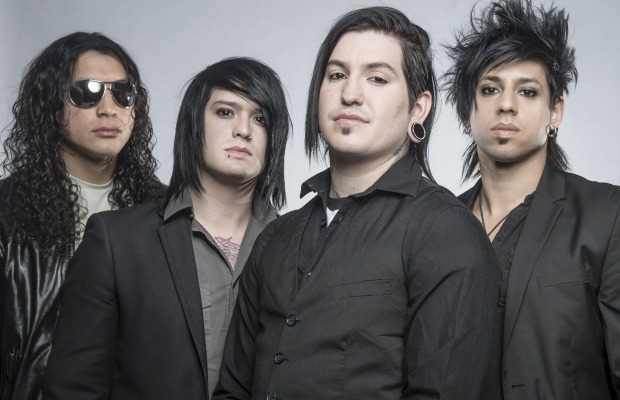 With only one original member remaining (drummer Robert Ortiz), Escape The Fate have run the gamut on lineup changes and media controversy. After replacing original frontman Ronnie Radke with Craig Mabbitt in 2008, the band would continue to be plagued by member changes for the next five years with the departures of founding bassist Max Green and guitarists Michael and Bryan “Monte” Money. Despite all this, the band were still able to crank out three albums—This War Is Ours, Escape The Fate and Ungrateful—in a timely manner with relative success. After overcoming his struggles with addiction, Green would rejoin the band in 2013. But the reunion was short-lived: This past May, Green announced his second exit from the band, and shortly after, his reunion with former bandmate Ronnie Radke in Falling In Reverse. Escape The Fate were among the last to know.

AP caught up with Craig Mabbitt and Robert Ortiz to discuss Green’s departure, the state of the band and their future.

To start off, how did the Pop Evil tour go over?
ROBERT ORTIZ: It was hard to have a strong tour that we were excited about, because, quite frankly, we weren’t excited about the tour. I like the Pop Evil guys and everything—they’re nice guys, they do their thing—but they’re a completely different band than us. They make their home at rock radio, and we grew up at AP and Warped Tour. We’ve reached out and seen what kind of fans might be out there; we’ve seen if anyone from that radio-rock side can have an appreciation for us—and they don’t always. So we weren’t too thrilled about the Pop Evil tour and all this stuff going down and, of course, the big one, right at the beginning of the tour—the reason why you’re calling us—Max. So, it was a rough tour to say the least. [Laughs.] There were some positive parts, but for the most part, it was really just trying to get by, man.

CRAIG MABBITT: There are so many little things that happened, too. It was like, “Why is this all happening on this tour? Why is karma biting us in the ass so much right now? What did we do?”

ORTIZ: We had literally just came off one of the best tours ever with the Bury The Hatchet Tour. Whether Ronnie [Radke] and Falling In Reverse played after or before us or whatever, the tour was [good] because the bands were playing together, and it was great. We loved it. We got along. Everything was just how we wanted it to be.

MABBITT: A week before the tour, we get told by Max that he has some family problems going on, and we’re like, “Okay.” He’s like, “I don’t think I’m gonna be able to make it on the first couple days of the tour.” Apparently, he was gonna attempt to make it out to the tour, because the tour bus went to our storage facility in Los Angeles and picked up all the band’s equipment. [Guitarists] Kevin [“Thrasher” Gruft] and TJ [Bell] and Max are all in LA. So they meet up, they’re helping load the trailer, and Kevin throws his suitcase in with all his clothes, TJ throws in his suitcase and so does Max. He throws his suitcase of clothes on the bus. The bus leaves. The tour gets ready to start. That’s when Max lets everybody know he’s not gonna be able to make it out for a while, because he had some personal family issues to deal with. “Well, okay, good luck with that. You know we love you. We’ll see you soon. Just let us know when you’re gonna be back out on the road.” About a week goes by, and we’re still like, “Is there a flight booked yet? Is there a date that you’re coming back out yet? What’s going on here?” We tried to make a post on our Facebook to let everyone know, “Hey, Max is dealing with some personal family stuff. He’s not gonna be able to be on the road for a bit. Wish him the best.” He wanted us to immediately take it down, which was already questionable. So, we immediately take the post down, like, five minutes after we posted it, and then that week goes by. So, now we’re back to asking about a flight, a date and when he’s gonna be coming back. Now we’re all getting concerned. Obviously, everybody’s main concern was drugs, because he had a history with that, and it’s fair for the band to be worried. So, we obviously questioned him about that. It’s always hard to question someone about something like that, because they’re gonna get very defensive.

That’s a rational concern to have.
MABBITT: I never accused him of anything. I texted him, “Hey, man, we just got off the stage. Great show tonight. Wish you were here. When can we expect you back?” I never questioned him. It turned into him wanting his suitcase back.

So the suitcase gets sent out that afternoon and we hit the stage that night. We were in Indiana. We finally get off the stage, and Kevin—we’re still all sweaty, just got off the stage—was like, “Guys, I don’t think Max is coming back.” And we’re like, “What are you talking about?” He’s just like, “Go on Twitter, and check this AltPress link.” AltPress has this post that Max Green has left Escape The Fate, and he’s not coming back, and he’s leaving us because of musical differences. I remember it ended with, “Escape The Fate have yet to comment.” I was like, “What? You guys know more than we do.” We were so baffled about it. We were like, “Oh my God.”

I felt like the biggest idiot in the world, because I’m the guy that called Max [and asked him to rejoin the band]. He was telling me, “I never thought I would have the chance to be back in the band again! Thank you so much, Craig.” It took some convincing for the other guys to even bring him back in the first place. I was like, “No, it’s gonna be great; the fans are gonna love it. It’ll be good to have Max back. Let’s bring him back.” I definitely felt very, very betrayed. Then within that week of him deciding to leave, it just coincidently happens that he joins Falling In Reverse. They said that it wasn’t planned or anything like that. I mean, I’m not stupid. Robert and I, we were like, “You know what? That’s fine. You [and Radke] have been friends for a while. If you wanna go and be in a band with him again, that’s completely fine.” But the way he went about it is what bothers us.

ORTIZ: It’s been weird. Like Craig said, the way he went about it is what really just struck me as odd, because I took a little convincing, because Max has a history. At the time when we brought him back, he was absolutely sober for sure. He did a lot of things to compromise my trust in him again, but at that point, what I realized with Max is that I can’t invest my heart into him as a person, because it’s just been broken too many times. But as a band member, as a business, I can certainly give it a shot. That’s what I did, and it was working, and everything seemed okay. The band are fucked up. Let me just put it out there like that. As a business, as an organization, it’s pretty messed up. We’re trying to figure it all out together and kind of soldiering through it all, because we love each other and we love what we do as a unit. We’ve continued on with Craig now for years. I was with Ronnie for a year and a half. So, it just shows you that we’re committed. With Max, it just felt weird when he came back, because I allowed him to do his own thing, and I wasn’t going to question him. When he started doing all the things and the shadiness that was happening going into the Pop Evil tour, I didn’t question him. I felt in my heart that he was doing something wrong. History was somehow repeating itself, or he was doing something that was not healthy for him, or he was gonna do something drastic to the band. I felt it, but I didn’t give him any crap about it or say anything. I didn’t call him, because I was just like, “I don’t wanna deal with it anymore. Just show up. Do your job. Let’s be a band. Let’s play a show.” For me, it just hasn’t been the same, and I think he feels that way. I haven’t spoken to him. He tried getting ahold of me, but at the time, I was dealing with family issues, and I wasn’t taking any other phone calls besides that. I’ll gladly play more shows with him. I still will. But I don’t know what’s in his heart. It’s difficult. I don’t know what to do with him, but I wish him the best. It was just like, “Damn, dude, you couldn’t tell us? You couldn’t say anything?” I wish he could continue with us, because we started doing so well with him. We started putting it all back together; then he just kind of rolls out. It sucks. It really does suck.

It’s not like he had to hide it from you.
MABBITT: I’ve always told him, I know him and Ronnie have been friends for years, and “If you think that’s the best decision you can make for you, then go for it.” It would’ve been a way more positive thing—when it comes to our band and the media—if he would’ve just sat us down, because we would’ve just supported him in his decision if that’s what he really wanted. But the way he went about it just makes it seem like, “Uh-oh, is there another feud going on between these two bands?” There obviously is not. We’re not resentful. We’re not angry. Me personally, I’m just a little disappointed.

I mean, I still talk to the guy. He texts me, like, “Saw that U.K. tour you guys announced. Jealous I can’t come with you.” I’m like, “I hope you guys are having fun out on Warped Tour.” Everything’s still cool. I don’t hold any grudges against Max. It’s just the way he went about it was very disappointing to us and made us look like idiots. It definitely hurt me personally, because I was the guy who asked him to come back. I feel like I was just a stone to be stepped on in the whole deal of things.