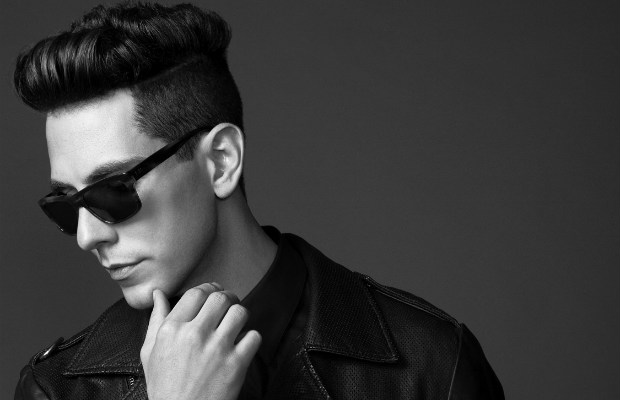 It might be nearly three years since Cobra Starship released Night Shades, their last studio album. But that doesn't mean Gabe Saporta has been resting on his laurels. Since the disc—which bore the double-Platinum smash “You Make Me Feel…”—dropped in August 2011, Saporta has toured South America with his bandmates opening for Justin Bieber, gotten married fashion designer Erin Fetherston and spearheaded perhaps the most buzzed-about scene reunion of the new millennium when Midtown reformed for a pair of shows at this year's Skate & Surf Festival.

All these experiences have set the stage for the next chapter of Cobra Starship. Just one listen to the band's new single, “Never Been In Love Before,” and you'll hear the sonic revolution. Gone are the Manic Panic-tinged synths and no-sleep-til-sunrise party vibe; in its place, we're left with a track that recalls '70s rock and soul filtered through a '90s lens as the singer falling head over heels for an unexpected love. AP caught up with Saporta to dish about the new track, when fans can expect more new music from Cobra and why he'll never give up bringing sassy back.

How are you doing after your Pete Wentz-assisted ice bucket challenge?
[Laughs.] It was good, man. It actually wasn't as bad as I thought it would be. Everyone and their mother’s doing it. My dad actually asked me if he should do one. [Laughs.] Have you done one yet?

No one's nominated me. I guess I'm not that popular. I'll donate, though.
Have you seen Britney Spears'?

Not yet—what did she do?
It's unreal. She yells “fuck” at the end and they try to cut it off. [Laughs.]

Amazing. Okay, so let’s talk about this new song, “Never Been In Love.” Honestly, when I heard it, I immediately thought of that New Radicals song “You Get What You Give.”
Yes! Exactly, that’s exactly what I was going for. Not New Radicals specifically, but that whole early ‘90s U.K. thing that was happening. Even though New Radicals were from the U.S., that guy Gregg [Alexander] was part of that whole U.K. thing, when bands started experimenting with electronic music and breakbeats.

It’s also noticeably different than much of what you’ve done in Cobra. Did you feel a sense of musical freedom coming off the success of “Good Girls Go Bad” and “You Make Me Feel…” or the need to churn out another club hit?
I think the, I don’t want to say danger, but the problem anyone who’s had success—not just in music but being a creator in general—is wanting to achieve that same success but not repeat it. When “Good Girls” came out, it was an extension of what we were doing in Cobra as one of the first bands doing electronic party music that came from the scene. And then we tried to replicate that with “You Make Me Feel…,” and while I think that’s a great song, there’s was something about it for me… I like to always challenge myself.

That’s why I started Cobra Starship; I wanted to experiment. For me to take a step back last year, doing the Midtown thing, just let me love music again and not be afraid to take chances. That’s why this song really sounds different. I was able to look around and think, “What kind of influences can we draw from here?”

You hinted at the beginnings of new Cobra material when we talked in the past; when did this song take shape?
Right around the time Midtown were happening, we’d do that on the weekends, and I’d work on Cobra during the week. When you’re trying to find a new sound, that experiment takes a lot of time. I didn’t want to do another “Good Girls.” It took time collaborating with people and figuring it out. This is a song that came together really quickly and kind of encapsulated what I was looking for. We got the song in the can, and everyone was really excited about it. We haven’t put out music in [a long time]; why not get it out? We’re still working on the album, and it will hopefully be out by early next year.

I know you've been working with CJ Baran (the Cab, Cody Simpson) and “Good Girls Go Bad” co-writer Kara DioGuardi on some of this new music. Who else?
It’s so funny how it happens sometimes. I went to this ASCAP writers mixer—I’d never been to one in my whole life—and met this girl there who’d also never been to one, and we connected. She’s a rapper named Hesta Prynn; she was in that group Northern State. We just connected. We write a lot of stuff together these days. We have a lot in common: She grew up in Long Island, I grew up in Jersey. We both listened to hip-hop and punk music growing up. It’s crazy.

You got married last year. What do you think you learned from that huge life experience—and also getting the opportunity to reunite with Midtown for the first time in nearly a decade?
Oh, so much. We could sit here and talk for days about it. Two really important things come to mind. One is… you know, I really got into music, and music saved me. I was a kid who had a hard life growing up; I was very depressed, and I think a lot of people who are into music are so passionate about it because they have nothing else. They find music and it becomes like a family; they really connect with it. I think as a result, you don’t deal with that negativity and end up with a lot of artists who are able to express themselves but get stuck in that expression.

I feel like the whole process with Midtown, and even Cobra Starship… Cobra Starship had ups and downs, even though it was party music. It still came from a place of not fitting in—not that I feel I fit in now. I think getting married, you need to do a lot of internal work to really be ready to commit to it and be responsible for someone else. It taught me a lot about what it means to be happy, and happiness isn’t necessarily something that happens outside your body. It’s something you choose every day, and you have to look inside yourself. I think that’s the struggle.

Lyrically, “Never Been In Love” is a bit of a departure. Now that you’re married, are you still going to be singing about making good girls go bad?
[Laughs.] I mean, that’s exactly what the struggle was. So now it’s trying to balance who I am now without being too adult to be up in the club and all that. There’s definitely a part of my personality that loves to push buttons and challenge people a bit, and I think that’s still there. I think the tongue-in-cheek aspect and the sarcasm has to be a part of it. On all our albums, there are songs that are sarcastic like “You’re Not In On The Joke” or “Guilty Pleasure,” but then there are songs like “One Day Robots Will Cry” that were very sincere and sentimental songs.

When you do music full time, it can really start to weigh on you, especially when you’re in a position where things at home aren’t okay. That’s what made me really want to get married. When I had a girlfriend and things weren’t great, I had the strength to go out and do whatever I wanted. When I abused that and didn’t act appropriately, I had chaos at home. And then when I came home, I would go back out and wouldn’t be able to handle it. That was a cycle, and I realized it was really just my fault. I think that’s part of what growing up is; you have to realize that you can’t blame anyone and just have to take responsibility for yourself.

So people don’t have to worry about you turning soft after getting married.
No, I think there’s gonna be the same balance of talking shit, sarcasm and sincerity, which is what makes me, me. It’s funny, because when you go through a process—like the one last year where I couldn’t release the music—I had gone too far one way. You know, when Cobra Starship started, it was like a character for me, but after a while the character becomes the actor. So it got to the point where I went too far that way and realized, “Oh, fuck. I have this and nothing to balance it out.” So I went back the other way. I did a lot of spiritual work; I went to South America for a while—and I did get soft. That’s what happened last year: I got too soft to put out music.