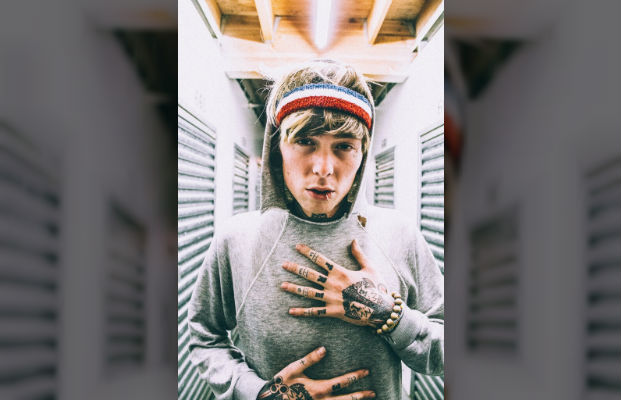 For the past year-plus, Never Shout Never braintrust Christofer Drew had been hyping his musical plans to anyone who would listen, goals that included releasing not one but two Never Shout Never albums in 2014, along with the possibility of music from Gonzo (his electronic side project), Eat Me Raw (his thrash-metal/hardcore outfit) and even solo material under his own name. As it turns out, sometimes Drew’s biggest hurdle to success is his own ambition—he ended up not releasing a single piece of new music this year.

Even so, what fans lost in the short term might pay dividends in the long run, as we learned when Evan Lucy caught up with Drew to chat about reconciling with longtime label Warner Bros., outward and inward transformations and how simply taking a second to slow down might help him create some of the best music of his career.

You’d been talking up at least two Never Shout Never albums this year: Recycled Youth: Volume 1, a collection of redone old songs, and a new disc. Neither have surfaced. What gives?
CHRISTOFER DREW: [Laughs.] Everything’s taken a lot more time.  I did a record earlier this year, in February. It’s finished and everything, but I kind of wanted to release it at the same time [as the other album]. But yeah, it’s like a redo of old songs, just a [fans-only] sort of thing. It’s going to be a soft release.

The other is our sixth studio record of all new songs. We just finished; it’s getting mixed right now. We worked with Dennis Herring, who produced Modest Mouse, Ben Folds, Elvis Costello… He was the perfect fit for us. I definitely made some promises to fans about having new music out this year, but we might have a single out in December. Most likely, it’ll be January, and then we’re looking at a March release date for the album. It’s taken a lot longer than I originally planned, but it’s been really beneficial for the music for us to take our sweet time. This has been the longest we’ve ever taken on a record. Usually we make a record in three to five weeks. This one, we took six months. I couldn’t be happier with it. We’ve got this guy Mark Needham mixing it; he mixed the last Imagine Dragons record, which sounds pretty cool. It seems really promising. We’ve got a couple radio songs on it I think would serve us really well on alt radio and could cross over to pop. We’re back on the same page as Warner Bros. after three years of me being really stubborn and not really understanding what was going on. Everything seems really great. I’m a little bummed we didn’t stick to our original plan, but I think people will forget once these albums are out.

Was taking your time a reaction to the compressed making of the last few albums?
Yeah, that’s it. I had never done it right—like demoed out songs before we did the record, never done pre-production, never revisited songs with the producer. With this one, I’d bring songs to the table and we’d work on lyrics and structural ideas; that was something I was never open to in the past because I was so stubborn. I didn’t want anyone to touch it. I wanted it to be a really organic thing, just going in without the producer hearing the songs. That worked and had its moments, but over time I think I’ve hit a maturity level to understand that it takes time to make something great. It takes more than just my creativity; it takes getting more brains in the mix and getting some help.

To hear you talk about being excited for songs to go to radio is something that would have seemed so alien a few years ago.
I feel like this next year is going to be really great for the band. We’ve been a little down and out the past few years. Me, personally, I’ve been struggling with issues, but 2013 was a great year for me to get back on my feet. This year was a way for us to get back on our feet musically and sort out some the business stuff. I’d fallen out of touch with Warner Bros., and that really affected our last two releases, which were total flops. We had a team of me, my management and a Loveway Records staff of two people. Going back to Warner Bros., we’ll have 50 people working the record instead of half a dozen. It’s going to be good.

How are you doing personally? We’d talked last year about you going to rehab and kicking hard drugs.
I don’t fuck around with that kind of stuff anymore. I definitely drink red wine with dinner and smoke pot at the end of the night when I’m looking to go to bed. I keep it really chill, man. I’ve been really focused on health and fitness. It sounds really silly, but I do yoga. I’ll do cardio and strength training in the morning. I’ve just been more focused on feeling good without substances. I was just super-depressed for a long time, and I used substance to deal with that. I realized exercise and eating right is the better path. I’m probably in the best spot I’ve been in since I started this band.

And you’re going through the process of getting some of your tattoos removed?
Yeah, I’m getting… [Laughs.] I have a super-embarrassing triangle on my forehead that I got when I was super-drunk. I’m going to lose that. I have a teardrop that I get questions about all the time—did I kill someone? If I knew I’d get asked that every other day, I wouldn’t have gotten it. I’m getting those removed. They’re not quite gone yet, but I’ve gone to three sessions and they’re fading. It’s a process; hopefully in the next year, they’ll be gone. I have some lips on my side from an ex-girlfriend that I got when I was super-in the moment with her. I’m thinking about getting that removed, too, because girls ask me about it sometimes. I’ve grown to like my tattoos. For a while, I felt like a freak, but I’m starting to embrace being a freak. [Laughs.]

Do you have much space left?
Not on my arms or my neck. I have a lot of stuff on my torso, but not a lot is filled in. I really like leg tattoos; those are sweet. I’m about half full.

Are you still working on a solo album, or is that on hold?
You know, I’ve been writing for that. I have about 40 songs for that, but I think it’s on hold. My original game plan was to do that first, and then I got inspired to go with Never Shout right now. It definitely seemed like the right move. I have all these songs though, so I’d like to get them going whenever I have a spare month. I’d like to book out a space in New York, maybe Brooklyn, and doing a live acoustic thing with some overdubs. I was writing a lot of reggae stuff, but then I revisited it after a couple months and it was a little dorky. I’ve been doing more of a folk vibe with fingerpicking and intricate lyrics—storytelling kind of stuff. But right now, I’m in rock mode with Never Shout.

At least you’re staying busy after a quiet 2014.
We’re going down to Brazil here in the next couple of days, and that will be our first show in over a year. It’s pretty rad. I’m antsy to get in front of people again. Nothing makes me happier than playing shows.

Especially in Brazil; they’ll be thrilled to see you.
Oh, dude. It’s so good down there. There are tons of people waiting for you at the airport and camped outside your hotel. It feels real rock ’n’ roll. That’s the only thing that makes us feel cool. We rely on that to keep our egos. [Laughs.] alt