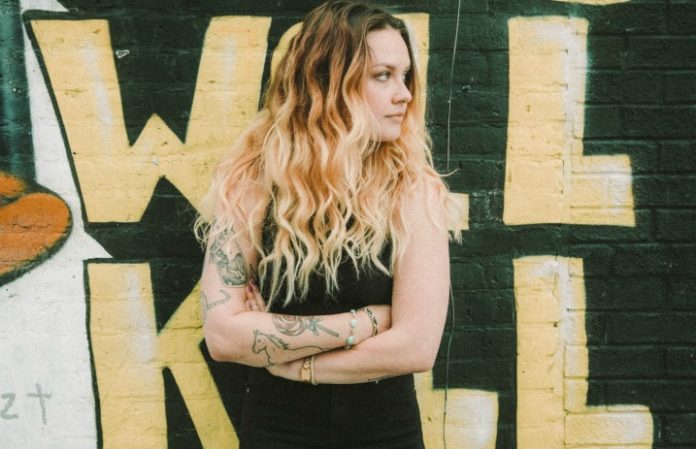 With a powerful voice eclipsed only by her swagger, LOLO has the natural ability to become a full-fledged pop star, but the individuality to realize life with the misfits is far more fun. You’ve heard her sing the hooks on Panic! At The Disco’s “Miss Jackson” and Fall Out Boy’s “Centuries,” but the Tennessee-based singer/songwriter—born Lauren Pritchard—also has starred on Broadway (Spring Awakening), composed an off-Broadway production (Songbird) and helped write a No. 1 album (Panic! At The Disco’s Death Of A Bachelor). She also just released her debut album, In Loving Memory Of When I Gave A Shit, a soulful collection of emotionally wrought, smoky pop songs imbued with an overflowing sense of honesty and hope. We caught up with LOLO to chat about what it takes to write a chart-topping album, rabid fans and more.

How’d you get hooked up with Brendon Urie?
In the beginning of 2013 I had started to work with Crush Management, who are the same management Panic has. They’re amazing and wonderful. JD, the head of Crush, looked at me during our initial meeting and asked me, “What do you want? I don’t care what other people have projected on you. What do you actually want out of your life and career?” I’ll always be performing, but I really want to be a writer. That’s what I’ve always been, anyway. Performing is the first natural thing that happens because I can perform my own material, but I think of myself as a writer. No one understood that or really took it to heart the way he did. I’d worked with people before who only really wanted me to focus on the performance aspect of things. It would drive me crazy. [Panic] had been trying to use a sample on “Miss Jackson,” and it ended up being a clusterfuck. JD asked me if I’d like to try to write something for them. I wrote the part I ended up performing, and that was really my first experience.

What about your experience on Death Of A Bachelor? Where did you enter?
I have spent a lot time with the Panic guys and the Fall Out Boy guys, and I’ve always been really fascinated by these guys who are married and really devoted to their wives, and then there are also these onstage alternative rock star men with screaming, crazy girls kind of rabid over them. It’s an interesting thing to watch as a woman. I’ll never experience a version of that. It’s just different as a guy than what we as women experience. Especially me with young girls: They think of me as their mom. They’re not going to be rabid and throwing themselves at me. [Laughs.]

“Death Of A Bachelor” was my first pitch. Brendon is, in my eyes, the best fucking rock ’n’ roll singer out there. He’s incredible, but I really wanted to hear him sing. He can sing his face off. I tried to be conscious of that and write from that frame of mind. I wrote it about him and his wife, Sarah. When JD called me to let me know it was going to be the title of the album, I was actually sobbing. It’s an incredible feeling to write something that someone else loves so much. It’s been a total dream come true.

Has your time on Broadway and with Songbird helped you approach writing with and for other people almost like fictional characters?
I think so. I definitely think it helps. I don’t necessarily think of [a person I’m writing for] as a character, per se, but I think it helps to be able to think in terms of what they’re thinking, what their feelings are in that moment. It definitely makes it easier for me to compartmentalize it in that way. I’m working on a piece right now with another woman, a theater piece tentatively called Pink Boxes about nine women in a pole-dancing exercise class and how their lives intertwine. We’re so preliminary, but it’s a similar thing of writing about things I haven’t necessarily been through. There are four women in the show who are moms with kids. I’ve never been through that, so you’re trying to think about it in the character sense so I can wrap my head around what their feelings might be. Ultimately you ballpark it and hope you get close, or as close as you possibly can.

“In my purest form, I’m a Hello Kitty-and-kitty-cat-loving closet redneck from Tennessee who, instead of going to a therapist, screams her feelings onstage into a microphone. [Laughs.] It helps.”

You released a handful of singles in 2013 and 2014 that were these brash, Thelma & Louise, middle-finger anthems. Your new album is basically the opposite of that. Where did the musical shift happen?
It’s been an interesting couple years of a musical journey. My natural tendency is where this record ended up. At the beginning of 2013, I’d been working on stuff for a while. I’d put out a record independently a few years before that. That was much more in the tonal area of this record, but I wanted to get away from that. I felt like I needed to … the music up until the first stuff you heard in 2013 was very much live instruments and not really fucking around with electronic elements or programming. It was very organic, much more singer/songwriter-type music. When I started working with Jake [Sinclair, producer], I really wanted to explore things I never had and see where it would lead me.

We put out a whole bunch of singles from 2013 to 2014. I genuinely loved it, but after going through some personal stuff and moving back to Tennessee for some family health stuff that was going on, I had spiraled into a very strange, out-of-character depression. I came out of it in the beginning of 2015 and into the studio with Jake. I’d been doing what I call daily word vomit: writing and expelling all of my thoughts. I told Jake I really wanted to talk about these things that had gone on. I wanted to make it about the words and the stories: some of the pain and frustration, some of the happiness, some of the anger. What we did was make it not about the production. Everything is still produced, but we wanted to make it about the words. We created the music around the vocal execution of the words so that was the focal point. In my purest form, I’m a Hello Kitty-and-kitty-cat-loving closet redneck from Tennessee who, instead of going to a therapist, screams her feelings onstage into a microphone. [Laughs.] It helps.

Still, there’s a through line on an older song like “Weapon For Saturday” and something off the new album like “Shine.” They’re both about empowerment and being confident with yourself but are just packaged differently, both lyrically and musically.
It’s really important to create music that not just makes you feel good—of course you want to do that, because music is such a joyous thing because it comes from the purest part of each of us. But I feel very strongly about creating music that makes you feel strong. Being alive and staying alive and adulting and growing up … it doesn’t ever get any easier. We all learn how to become tougher and harder to learn how to deal with whatever gets dealt. If we could all let go of our walls and egos, we’d have an easier time. We’re all a little bit sad and a little bit tired and a little bit restless. I like to write songs of strength because we all need it, like all the time.

What’s the best songwriting advice you ever got?
When you feel really, really strongly about something, don't compromise. You’re the one who has to live with it for the rest of your life. Whether it’s a lyric or any kind of decision—obviously you do have to make compromises and they’re worth it—it’s not worth your sanity. It can be important to put your foot down and say no. I’m fortunate to not be in these positions often, but early on I’d have night sweats if I’d say no. It’s not that I’m always right when I put my foot down, but I’m always true to myself. It always wound up being fine in the end anyway. ALT

Check out the video for “Shine” and find more info on LOLO's tour here.