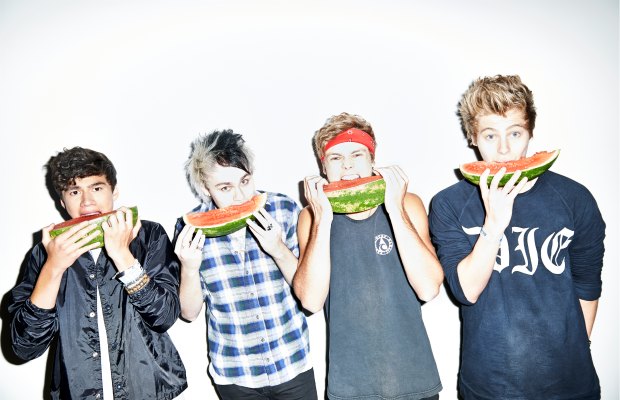 From Good Morning America appearances to stadiums around the world to your local supermarket (seriously, go look at the magazine rack), it seems 5 Seconds Of Summer are everywhere these days. It’s been a life-changing, whirlwind of a year for the Australian quartet, a year that found them releasing their self-titled debut album (which hit No. 1 in multiple countries, including America) and playing to upwards of 70,000 screaming, crying fans each night as part of One Direction’s ridiculously successful Where We Are Tour.

The group also appeared on the cover of AP 314, begetting a barrage of emails and social-media armchair quarterbacking, which generated commentary on everything from the band’s wardrobe choices to their perceived “punkness.” But no matter your opinion of the group, it’s hard to argue they’re doing something seriously right: 5SOS have an arena and amphitheater tour on tap for next summer, and this November, they will hit the Forum in Los Angeles for a two-night stand booked around their first-ever fan convention, Derp Con. Just before taking the stage for the Where We Are Tour’s penultimate stop in Tampa, Florida, frontman Luke Hemmings chatted with AP about the band’s banner year, plans for new music and recent fast-food discoveries.

So things have been pretty boring since we talked for your cover story, huh? You’ve only had a No. 1 album and gone out on a stadium tour.
LUKE HEMMINGS: Yeah, just a little bit’s happened. [Laughs.]

The majority of the letters we got about the story were positive, from people who maybe didn’t know what the band were about, but ended up seeing you guys in a new light. Have you felt things starting to change, or are you too insulated to notice?
Yeah, that’s all you can ask for. I don’t care when people don’t like our band, but I don’t like when they dislike us for reasons that aren’t right. Being inside of the bubble makes it a little tough to judge, but you can go on Twitter and see something and how people reply to it. There’s definitely a lot of negative stuff out there on the internet that I’ve seen, but I try not to look at it too much. Sometimes I go see why people like us or don’t like us.

This is your second tour with One Direction. How do you think you’ve grown as a band this year, compared to when you opened for them in 2013?
I think having our own music out is big this year. Having new music has put a lot of momentum behind our band. Last year, we’d play a few songs and get the crowd pumped up like a support band should. We had a few songs, but we weren’t really a fully formed band. Now, we go out there and people are excited to see us. It feels like we’ve got ownership over our band. It’s a nice feeling.

I was at the Where We Are tour stop in Washington, D.C., and it was wild to turn around and see 40,000 people watching you play in a baseball stadium. Oppositely, you appeared on The Tonight Show Starring Jimmy Fallon to a room of, what, 400? How do you flip that switch between those two opposites?
Performing for TV is way different. You’re not there performing for the audience really, so there’s not as much pressure. But we played the House Of Blues in LA last month as a small pump-up show; I think it was a 1,000 cap or something. We also did the iTunes Festival in London, and that was 2,000 [fans]. It was really cool because it was all our fans. But you’ve got to change the show a little bit. It can be hard to go from a stadium to a theater, but you can only do what you know as a band. It’s just about turning it up or down based on the situation.

You’re probably able to really think about the insane growth of the band when you play a club and then go out and play the Rose Bowl the next night.
Yeah, there was a point where we struggled to get people to come to shows. It’s definitely incredible to see where it is now and play for that many people each night.

You’ve got two arena shows of your own next month at the Forum in conjunction with Derp Con. How are you preparing for that?
We’ve got a few arena shows in November—there’s a Phoenix show before that—and then we’ve got a big tour next summer. I don’t know; I think it’ll be a theater show amped up. We want to make it feel like a theater show in an arena. We don’t really need too much stuff as a band: a drum riser, a few boxes to jump off of and lots of room to run around. That’s really all we need to have a party every night.

It must feel like you’ve been in America forever. Have you adopted any “Americanisms?”
I definitely enjoy the food. I’ve had to change my voice, too. My accent isn’t as Australian as it used to be, because no one here can understand people from Australia very well. When we first came here a year-and-a-half ago, people would never understand me. [Laughs.] I don’t know. I love America; it’s a great place for our band.

What’s your favorite American food?
The other day I had Chick-fil-A for the first time, and that was really nice. There are lots of steakhouses here that are really awesome. There’s one called Morton’s; I like that place as well.

I used to work at Chick-fil-A when I was in school. They made me dress up as the cow.
Is that better than actually cooking the food? I think that might be better. Did you get beaten up by any kids?

This one kid jumped on my back and tried to take me down. I didn’t fall over, though.
[Laughs.] Wasn’t that strong.

I know you’ve been working on new music with John Feldmann. What’s the status of that?
We’ve had a few off-days where we’ve gone into [either] a studio or hisstudio and just tried out some ideas. I’m not really sure what’s going on at the moment. We’ve written a few cool things, but I think I need to be off the road and just do nothing for a bit and then come back to writing. We’re always kinda writing on the road, and I’ve got a bunch of voice memos in my phone that come to me at 5 a.m.

So maybe some new stuff next year?
Yeah, I think at the beginning of the year we’ll try to start writing some of the album. We want to get in a good spot so that when we go to do the album, it’s not all rushed at once. We’ll do it before the tour and in the gaps when we’re not touring.

After what seems like forever, you’ve got some well-deserved time off at the end of this year. What are you looking forward to?
I kinda just want to chill out and do nothing. I definitely want to see my family, see my brothers. And yeah, maybe some friends… if I can make some friends. [Laughs.] alt