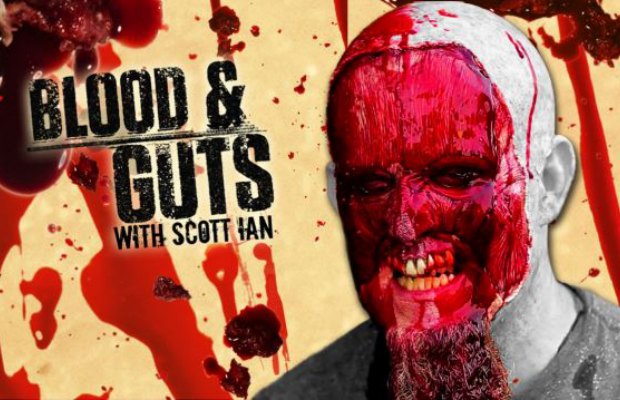 Every week on the Nerdist YouTube channel, Scott Ian (Anthrax, the Damned Things) meets his violent, blood-soaked maker with some of the best special effects makeup and prosthetic artists in the horror game for Blood And Guts.

We caught up with the guitarist and self-proclaimed horror nerd to talk gore, what goes on behind the scenes of slasher flicks and how he feels about being sliced, diced and shot at week after week for the new season of Blood And Guts.

Blood And Guts is currently in its third season and airs every Thursday until Halloween on the Nerdist Channel. Check out the October 17 episode below!

You’ve been a horror fan your entire life. How did you get involved in the horror scene? What attracted you to it?
SCOTT IAN: I’ve just been into it since I was a little kid watching horror movies since I was four or five. It is something I’ve never gotten tired or bored of–watching movies, reading books and comics. I’m a massive Stephen King fan as well. It’s been a part of my life forever, and being able to do Blood And Guts and, in some little, tiny way, get to be a part of that world has just been a blast for me.

Having grown up with horror, does going behind the scenes give you a greater appreciation for it, or does clearing the smoke and mirrors take away some of the fun?
Well, I kind of already had an idea of how things work. Someone asked me recently if there was anything that surprised me, and no, I can’t really say that there is anything surprising about it. It’s just technical aspects of how the effects are created through the things they do, how they think about things and how they come up with things. So that creative side for me is what I find the most interesting, just, you know, the fact that guys sit around and think of new and better ways to kill people on-screen. I love that that is somebody’s job, that someone is constantly trying to push that envelope and trying to find new and better ways to murder people.

You said nothing really shocked you, but has anything ever really grossed you out, where you were like, “Oh man, that’s gnarly.”
No, I can’t say that. It would take really, really, a lot. If anything, I’m just like “More, more, more!” I can say that cleaning up afterwards is a little annoying. [Laughs.] Like, a week later, my wife would be like, “You’ve got some weird glue stuck to the side of your head.” I’m like, “Still?!” But other than that, no. Nothing grosses me out.

What is the most involved or prolonged prosthetic application you’ve undergone for the show?
Off of the top of my head, Joel Harlow’s [Makeup, Pirates of the Caribbean] [H.P. Lovecraft’s] Fishman makeup was pretty intensive. Even when I got my face cut in half by Rob Hall [CGI, Buffy The Vampire Slayer], a lot of that was CG, so that wasn’t really my face. Actually, you know what? It’s either Joel Harlow turning me into Fishman or Jennifer Aspinall [makeup, Saturday Night Live, The Toxic Avenger] turning me into, you know, the kind of weird Jerry Garcia. It was probably one of those two because those were certainly the longest. There’s one you haven’t seen yet. Where we would kind of do a throw back to ‘80s gore, which was actually pretty cool. I don’t want to give too much of that away.

What is your all-time favorite kill scene from a horror film that you would like to emulate?
There are a couple. One of my favorites ever is in Dawn Of The Dead where the biker sits down in the blood pressure machine all in the midst of zombies attacking and he decides to get his blood pressure taken and of course, he gets his arm ripped off, and he is on the floor and the zombies rip up his whole belly and eat all of his guts. Or there is a scene where, I think it was Maniac, and I think it was [the work of Tom] Savini, where he jumps on the hood of the car and blasts the guy in the front seat and blows his head off. Those are two that I would love to redo.

What’s your favorite way you’ve gotten “killed” so far on the show?
The first one that pops into my head is getting my head chainsawed, of course. That was certainly the bloodiest. The most over-the-top was Jerry Constantine and that was amazing. I was actually running one of the fire extinguishers attached to the hose, pumping blood, so of course, I went completely crazy with it. That one is the first one. And then in a smaller way there was a Gary Tunnicliffe episode where the camerawoman turns into a zombie, bites me in the neck and then Gary shoots her in the head. I thought that was pretty awesome. As well as the Ron Trost episode where I just get shot and they had the squibs tied to my chest.

How many times do you get to see someone get shot on TV or in a movie in your life? Like a billion times. But actually getting to do that for the first time, I was actually nervous. Having the little squib attached to me, I was like, “Okay, there’s going to be a little pop and a sting, but you know it’s fine.” I was actually nervous, like, “Are you sure this isn’t going to, like, blow me up or something?” And he was like, “No, that’s why they hire me, so they don’t blow people up.” That was also a lot of fun. Every one of them is fun. I get to do all the crazy stuff that I’ve only ever seen on the screen my whole life, and now I get to be a part of it. A lot of the time these guys are, like, apologizing to me when they’re making me up or doing things. I’m like, “Are you kidding me, dude? I wish I could do this every day. Just please let me be in a movie and let me do this every day.” I would love it. >>>