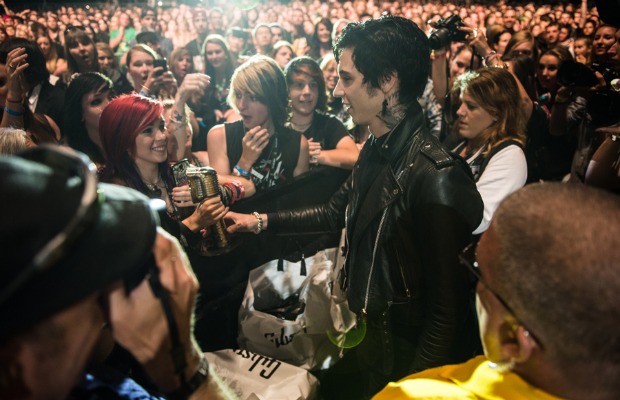 In the past, Black Veil Brides’ impressive string of awards show victories has stirred up much debate about the band and the voting zealots of the BVB Army. In short, the BVB Army shows up for their band when it's time to vote. So it was only fitting that BVB would take home the APMA for Most Dedicated Fans. But frontman Andy Biersack didn’t exactly have plans of taking the award home.

After accepting the award, the “In The End” singer did something rather surprising: He handed the award to a (seemingly random pick) BVB fan in the audience. “Now, this is a fanbase award,” he says, “therefore, I feel that I should not be holding this. So I’d like to give this to one of you who’s a Black Veil Brides fan.”

Watch Biersack’s full acceptance speech below, and let us know your thoughts. You can also watch him performing with the Misfits.

Andy gave the Skully for most dedicated fans to a fan in the crowd!!!! #BVBArmy #amazing #thefeels #APMAS

But a big congrats to BVB for most dedicated fans and it was so nice of Andy to give his award to a fan. #APMAS

also, im still jealous of when andy gave that girl the most dedicated fan award #APMAS

The fact that Andy gave a fan the most dedicated fan award was pretty awesome. #APMAS

The first message that I need to tweet is how proud and happy we were that the APMA “skully” award that BVB won was for Most Dedicated Fans.

Without a shadow of a doubt, that particular award represents what Black Veil Brides has always been about. A fans band. Critics be damned!