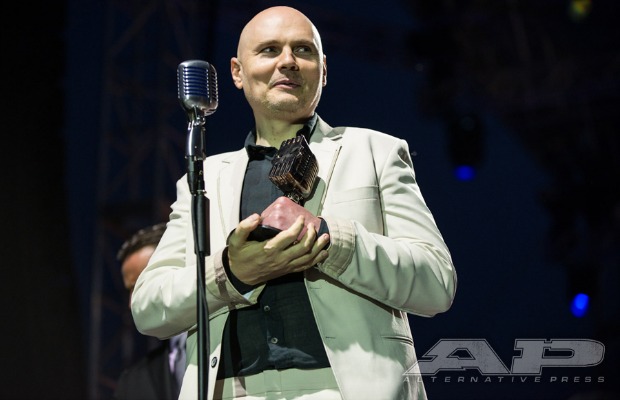 Two nights ago (July 21) in Cleveland, Smashing Pumpkins frontman Billy Corgan received the Vanguard Award at the inaugural AP Music Awards for his legendary career in music. Recently retired pro wrestler CM Punk presented the award to Corgan, who then went on to give a heartfelt speech, preaching his defiant message to a younger generation.

In the climax of his speech, Corgan stresses the need for alternative music to push peoples's buttons, while honoring the musicians present at the awards show for doing just that. “I didn’t start a fucking band to be anybody’s bitch,” he adds, “I started a band to kick your fucking head in.” Read the rest of Corgan’s speech (and watch it) below, and let us know your thoughts on what he had to say.

“Let me say this last thing to you: There’s two paths you take when you first put on that guitar or sing that song. And that’s “Do I wanna please the audience?” Or “Do I wanna push that audience’s buttons?” And in alternative music, which Alternative Press has been putting across for how many years now, you have to be able to push those buttons. You understand what those button pushes mean, but most of the world doesn’t. They just see angry people screaming about God knows what. Over 25 years ago, I made that decision that I was gonna push your buttons, or the people that came before you. And I like to think I’m receiving this in humility, because I am willing to push your buttons. Because I am willing to tell you to go fuck yourself. I didn’t start a fucking band to be anybody’s bitch; I started a band to kick your fucking head in. What I love about the bands that are coming up here tonight: That’s what they’re trying to do. They’re trying to kick your head in, and they should. You deserve it. You deserve your bands to push you, to make you question everything about you, because if they don’t do it, nobody else will—and you do understand that. So God bless you. Thank you very much.”

@billy 's speech at the APMAs was short, direct and pretty great. http://t.co/kIVYk4TLfD

“I didn't start a band to be anybody's bitch, I started a band to kick your fucking head in.” – Billy Corgan at #APMAS

Your speech was out of this world. Nothing but the truth. @Billy #APMAS

Billy Corgan’s speech has absolutely been the best thing about #APMAs so far.

Congratulations to Billy Corgan for winning the Vanguard award! #APMAS

.@Billy Corgan won the Vanguard Award #APMAS & I got to say hello & thumbs up his speech! #billycorgan #beatsmusic pic.twitter.com/dgyWyQ8lmP