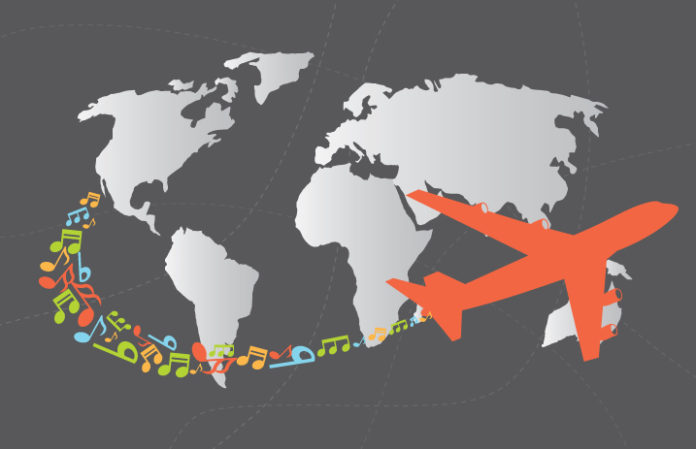 My new Fearless Vampire Killers tattoo isn’t healing well. It sits in the crook of my arm, rubbing against my bicep when I bend. I suppose that’s what I get for making an impulsive, passion-driven walk-in on Halloween at a tattoo shop in a foreign country. It was mere paces from Camden Underworld, a venue 3,736 miles from home, where, veritably, I had lived for two days and left the night prior to this sealing of FVK’s memory permanently on my arm.

The day after FVK’s October 30 farewell show, their name was still on the marquee—the last gasp of a band on one side of the street, the Camden Town underground station on the other. Both end points or beginnings of new journeys, depending where your head happened to be at the time. On July 4, 2016, FVK announced they would disband following the departure of co-vocalist/guitarist Kier Kemp. The passion simply wasn’t there anymore for him, and FVK were not a band that could go on with half a heart, nor without all the parts that had made them what they were.

It was impossible not to think of the “what-ifs” for such a band as I passed that ghostly marquee. What if they had broken out just a couple years earlier? What if their music had made its way into the right hands? What if they had blinked at a different time and shifted the universal tilt? A flutter of butterfly wings, and all…

But such thoughts are futile now, and you could hear the desperation in vocalist/guitarist Laurence Beveridge’s voice onstage as he implored fans to start bands of their own and continue supporting bands like FVK’s openers ZOAX and Ashestoangels—to give them a better fighting chance than his own band had. (“Keep those bands alive if you can’t keep us alive,” he shouted.) His words trembled and were soundtracked by the opening riffs of “City Falls To Dust,” a bittersweet song everyone soon realized would be the last FVK performed.

I looked at the crowd and a blur of faces were squeezed tense in their fighting off tears. Hundreds of hearts broke from the finality, leaving what I personally can only describe as a hole where something very vital once was. “You’ll be there/’til the city falls to dust/You’ll be here in my blood/’til the day I die”

Perspectives on the band’s situation were as varied as the countless mourners I met during my travels. Their experiences were wrought with joy, bitterness, reality-scorning myth-making, sadness hidden by jokes, dancing, exhaustion, snot-dripping sobbing, distractions provided by other warm bodies, alcohol, solitude, quiet, yelling, laughing, catharsis…

As an insider and an outsider at once, I’ve heard stories from the horses’ mouths and have also listened to eye-rolling theories some believe to be “truths” from the other side. I quietly bit my tongue with every urge to dispel some of the more absurd. It wasn’t my business. It felt too personal, and the stories seemed almost a necessary myth people needed to distract themselves from the present reality—even at the expense of others’ characters. Every one of them grappled to protect one’s right to feel grief in their own way and to accept, cast or deny guilt however they needed to feel better about the ending of something they had held dear.

Denial, Anger, Bargaining, Depression and Acceptance—the gang was all there in the Underworld, and I was among the lucky. Depression and acceptance came quickly when I heard the news, primarily because I felt I’d been witnessing a long death at that point through various interviews with the band over the past few years. In essence, my denial came before there was need for grief.

It was the acceptance, however—the grave and stark reality that the shows I witnessed were their last—that broke my heart and left me crying at the side of the stage into the sweaty back of a man in a destroyed wedding dress. My arm wrapped around his chest, and I squeezed his hand with the intensity of the final live notes I would ever hear from FVK trembling in my chest, soaking my face with tears that felt they had been boiled before forming and joining the general condensation drowning the Underworld.

To an outsider, it may have seemed the people whose lives FVK’s music impacted were geographically and aesthetically limited. (“Thanks for making us the biggest unsigned emo-rock band in the East Anglia area,” Beveridge had joked.) But there were at least four Americans in attendance, as well as other fans who had traveled from their various countries for one last moment in their band’s presence and a chance to say goodbye, something many of us had learned the hard way was a necessary gateway to finding solace after losing an artist we loved.

I never had the chance to say a proper farewell when the band that was my entire lifeblood broke up in 2013. (We won't go there. You know who I mean…) Fearless Vampire Killers, following that loss, became a catalyst for a lot of things for me: a reinvigoration in my interest in music, a passion project, a reassurance that what I was doing mattered. Another American I met at the show said it perfectly when we were getting our post-show tattoos to commemorate our journeys: “They gave me music back.”

The tattoo: Most people will think it’s two misshapen semicolons. That, I’ve accepted. I think about why I'm ultimately okay with that and conclude that what matters is that I understand it, and perhaps that's why I'm struggling weeks later to work out this story. What FVK did to compel me across the ocean doesn't look like anything or have any particular sequence of words to justify it, but I know how it feels and what it means to me.

On October 30, 2016, FVK said two goodbyes. They first played a matinee show that was visibly tense. Other witnesses agreed that they felt at any second one of the guys could very well have walked offstage. By the evening show, that tension was gone. Acceptance reared its head, and made apparent the pressure for a moment to remember and for a meaningful send-off that would bring quiet, dignified closure.

A Strongbow toast to FVK’s late tour manager Stevie D prior to the band’s playing “Regret” wracked the room with sobs that continued to the end, making the tight-knit community that had formed around the band, both in front of and behind the stage, all the more apparent. The mood was only broken by a moment of comic relief when bassist Drew Woolnough and drummer Luke Illingworth swapped roles at the encore for a cover of the White Stripes’ “Seven Nation Army.”

But ultimately, the city still fell to dust…

A friend once told me that every time they watch Titanic, they hope it will end differently, despite its story being sealed in history. There’s always the glimmer of hope that just once, the film will have a happy ending. Watching both FVK’s matinee and evening farewell shows felt something like that.

I'm sitting on the floor in a filthy, crowded dressing room in Camden Town, London. Some people have passed through declaring it smells like curry, some like cabbage, most like rather rude things that would make most Americans shudder. I wonder in this oddly empty post-show haze as people around me embrace and cry and laugh and pantomime wildly, “Was the trip worth it?”

I wouldn’t have missed these final moments before the next chapter of these brilliant musicians’ journeys. Even though, as I think about it now, it feels a large part of myself was left in England. But, I also feel a sense of catharsis and of faith. I am confident that missing piece can be recovered, reshaped and revitalized.

To Fearless Vampire Killers: I know I’ve told you this countless times, but you gave me something to believe in. It has been a pleasure getting to know you, immersing myself in your art and getting to be a part of the dedicated and passionate community that surrounds you. Thank you for giving music back to me.