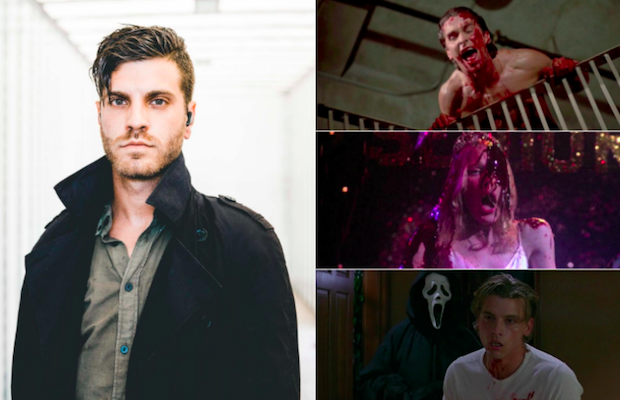 Vocalist Spencer Charnas of Ice Nine Kills is a vault of horror film facts. Not only is he a super fan of the movies and of gothic literature (which is immediately apparent to anyone who’s ever listened to the band’s music), but he’s also bursting at the seams with statistics about box office debuts, production controversies and, of course, the infamous directors and producers that have turned nightmares into reality.

“For me, it all started when I was probably, like, 6 or 7 years old,” Charnas begins. “There was this one mom and pop kind of a movie store—back when movie stores were still in existence—that was attached to this supermarket. Whenever my mom would go shopping, I would tag along and I would go to the video store to kill time while she was doing her shopping, and for whatever reason I was always drawn to the horror aisle. I would look at all the VHS covers and start to become obsessed with these movies. The first one I saw was Halloween, the original 1978 John Carpenter classic. That has always been the staple of my horror movie collection and love. That one was really influential and produced another one of my favorites, which was Friday The 13th, which came out a couple years later.”

Anyone who has seen I9K’s cinematic music videos for songs like “Hell In The Hallways” and “Communion Of The Cursed” can trace Charnas’ spooky beginnings all the way up through the art he creates today. However, the horror tales of the past don’t just affect the band in terms of sound, but also in the greater context of aesthetic as well.

“There’s a lot of music that comes out today and a lot of records that come out today that just don’t have that much thought behind them, as far as making a cohesive piece of art,” he laments. “Our whole last album had a theme of literature, and our last tour was based around our song ‘Hell In The Hallways,’ which was inspired by Carrie, so it was a whole prom theme. I think we’re filling a void for kids because they want more than just music; they want an experience.”

The band’s last record, Every Trick In The Book, was inspired entirely by grim and gothic stories, from classic works of fiction that every child knows (Robert Louis Stevenson’s The Strange Case of Dr. Jekyll and Mr. Hyde) to real accounts from the Holocaust (The Diary Of Anne Frank). Outside of the record, Charnas points to other works such as Bram Stoker’s Dracula and Bret Easton Ellis’s American Psycho as other favorites.

“Obviously it’s really brutal and disturbing,” he says of Ellis’s book-turned-film, “but there’s definitely an element of humor there, which is cool, and that’s also why I really love the movie Scream. That’s absolutely one of my favorites. That was probably the first horror movie that I ever saw in theatres.

“Just a couple weeks ago when we were touring in northern California—one of the things we like to do is visit locations of our favorite movies—we went to the high school where they filmed Scream. We went inside, and it’s one of those rare film locations that they used the exterior as well as the interior, and we found the staircase where Neve Campbell and Skeet Ulrich were talking before she goes into the bathroom and is almost killed. So that was really cool.”

Charnas’ intense passion for the gory and the macabre has led him to many strange places. While on tour, the band also like to visit the country’s most scary haunted houses, including Netherworld in Atlanta and Erebus in Pontiac, Michigan, which have frequently topped haunted attractions lists. The coup-de-gras, though, is that the vocalist lives in probably the most notorious town in America—Salem, Massachusetts, the spot of the infamous witch trials.

“A lot of crazy shit went down there,” he says. “A lot of innocent people were killed. I feel like any time that happens, spirits linger there, like mental asylums and old prisons. I definitely believe in that kind of stuff.” While the horror-lover believes in the supernatural, he has unfortunately never encountered it in his own life. He has, however, encountered real world terror.

“When I was very young, maybe 7 or 8 years old, I was vacationing with my family in Tucson, Arizona, and we were on our way to see a movie at night, and we passed this car and it looked very suspicious to us,” Charnas reveals. “A guy was putting a body or something in his trunk—like a duffle bag. For whatever reason it really perturbed us. So the guy got in front of us and started driving away and we actually called the police because we were actually really concerned that this guy had killed someone. He noticed that we were following him so he sped up, he turned of his lights and took a right really quickly.” While Charnas says he and his family never found out what happened after that, he admits to frequently revisiting that moment in his mind, wondering if he did in fact cross paths with a killer.

While the close encounter was enough to shake him, Charnas remains passionate about his favorite on-screen slashers. From a murderous Santa Claus in the 1984 movie Silent Night, Deadly Night to notorious clown serial killer John Wayne Gacy, the Ice Nine Kills vocalist finds the figures endlessly fascinating. The actions of a killer, of course, are not to be celebrated, but there is something about blood and guts that always manages to entrance us all. As Charnas puts it, “There are a lot of sickos out there, and I like it!”