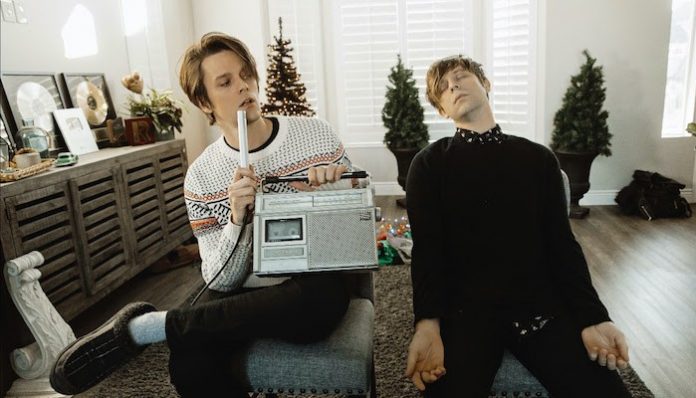 Today officially begins the most wonderful time of the year. That’s because Dallon Weekes and Ryan Seaman, aka I DONT KNOW HOW BUT THEY FOUND ME, have lit up our holiday playlists with Christmas Drag.

The three-song EP starts off with a holiday greeting from an unknown public-access TV program. It’s followed by the title track, which expertly marries cosmopolitan cool swagger with the sadness of a bruised heart.

“Merry Christmas Everybody,” a cover of the 1973 hit by iconic British ’70s glam-rock band Slade, follows next. The EP ends with the somber “Oh Noel,” co-written with Weekes’ longtime friend Nate Pifer, that is truly one of the saddest Christmas tracks in recent memory.

AP caught up with Weekes to discuss his love of holiday music; the motivations of the EP; what didn’t make it onto the final release; and the status of the highly and hotly anticipated proper iDKHOW full-length debut LP.

When you were recording, did you set up a Christmas tree and twinkle lights in the studio for that holiday vibe?

DALLON WEEKES: Not for the studio. But we did shoot some music videos over the course of a day at my home with this 30-plus-year-old VHS camera shot it all on videotape and have my family come over and help out and did some just little simple one shot, one take sort of lyric videos for the songs. So I’m excited to see those themes finished. I had the VHS tapes handed over to the engineers to transfer to digital, so we’ll see how long it takes.

I used to collect alternative Christmas music. That meant everything from Can playing “Silent Night” to King Diamond’s “No Presents This Christmas.” I understand you have a deeper love for the genre across the board. What do you find compelling about holiday music?

I’ve just really loved Christmas music going back to when I was a kid. I’ve always loved Christmas. I think people tend to treat each other a little bit nicer around the holidays. Maybe there’s some sort of psychological association with that feeling and with Christmas music, in general.
I know there’s a good portion of people that just hate it with a lot of passion. But I’m completely the opposite. I’m just a sucker for Christmas music in general. I love classics, too. You know, the ones that are on the XM Radio Christmas station every holiday. But I’ve got a soft spot in my heart for the ones that are a little bit left of center, like “Donde Esta Santa Claus?” by Augie Rios. Really obscure record. It’s more funny than anything else, but it’s like one of those little novelty Christmas songs that got forgotten about over time.

Do you have a personal favorite Christmas album?

I’ve always been more of a song guy when it comes to Christmas tracks. But my favorite one is probably Christmas Time Is Here by the Vince Guaraldi Trio. I know it’s part of that Peanuts special. People associate it with a Snoopy cartoon. But I’m just a sucker for that one. It’s probably my favorite. There’s this sort of weird, heartbroken sadness element to it, as well. I think that’s what really makes me like it because it is a sweet little song. If you really listen to the chord progression and the whole vibe up, it is really sad.

You did some holiday tracks a few years ago as part of your Xmas Jambs series. Is this EP a continuation of that?

A couple [of] months ago, the record label asked me if I had any plans [to record any] this year. And I didn’t really until they brought it up. I started to think about it and found an opportunity to go in and record a few songs. “Christmas Drag” was a demo I made in my garage 12 years ago during the Brobecks. It never really got a proper recording or proper release. That was pretty much the nature of the Brobecks: Everything was really DIY, and I don’t know [if] we ever got a proper opportunity to ever record in the studio. So anytime we made a song, it was just on an old eight-track tape player in my dad’s garage or something.

I was originally going to do four songs, two of them covers. Slade’s “Merry Christmas Everybody” I’ve always loved since I first heard it four years ago.

Read more: Dallon Weekes says the debut iDKHOW album is “all over the place.”

Which was the one that didn’t make the cut?

The other idea was a cover of David Bowie and Bing Crosby’s “Little Drummer Boy/Peace On Earth.” I wanted to do it with Puddles Pity Party, but we couldn’t schedule it. An ultimate dream would be to recreate that Bowie and Bing Christmas special video that aired on TV back in the ’70s. That would be fun. That’s something I still want to do, and we still might. Maybe next year when we have more time and hopefully more budget to do Christmas songs. Now that we have the idea, maybe we can get it on the books sooner so we can do it next year.

“Oh Noel” is positively depressing, but it’s incredibly honest. I think everyone at some point has wondered about lost friends or lovers at this time of the year. Is this art imitating life?

Hopefully life won’t imitate this particular song too closely. [Laughs.] A lot of people seem to have or at least come across, at some point in their life, people on a more troubled path than they are. That’s what [“Oh Noel”] ended up being about. I’m really, really proud of how it came out. There’s a big spectrum of emotions that come with this holiday, because it is pretty centered around a lot of emotional concepts like family or religion and things like that.

Read more: iDKHOW frontman Dallon Weekes has a song with twenty one pilots

A friend of mine, Stu Maxfield, came in and played the piano on the track. We went in on the first take, and the engineer chimed in and asked us if we wanted another pass at it. But we both looked at each other at the end and said, “No, there’s something special about that one.” So first take, first try on that song.

I know the one thing weighing on your mind is the creation of iDKHOW’s proper full-length debut. Was the diversion of doing Christmas tracks somewhat of a psychic head cleaner for you?

It was a very welcome diversion because getting this album recorded is something that’s been weighing heavily on my mind for what seems like years now. It feels like something I’ve been waiting my whole life to do, so there’s a lot of anxiety and a lot of pressure to get it started. But all of that’s self-inflicted, really. Recording these Christmas songs was a nice moment to stop thinking about that goal for just a moment.

Has the time away been productive in terms of refining existing songs and inspiring others?

Now that the Christmas stuff is done, I’m thinking about it constantly, staying up at night and retooling ideas and continuing to write. The good side of that coin is that more and more material is being written, beating out some of the older ideas. So I think we’re going to end up with something that’s really great.

You’re still waiting for the starter’s pistol to let you out of the block.

Yeah. I imagine what a race car driver might feel right before that green light flashes and the flags go up, as Cake would say.

Christmas Drag EP is available now via Fearless Records. Check it out here or below.