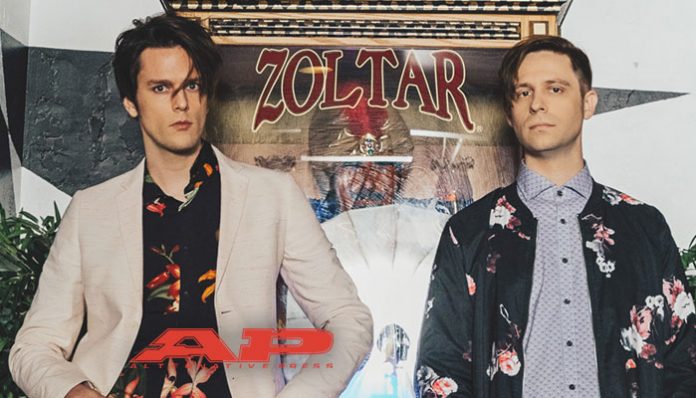 We are stoked, honored and excited to bring you the new collector’s cover for our 35th anniversary edition! As you know, we’ve been huge fans of I DONT KNOW HOW BUT THEY FOUND ME for a while now. So instead of waiting for the release of their much-anticipated debut album, we figured we’d do ourselves, the Search Party (the band’s fandom) and iDKHOW a solid, right now. It’s great having Dallon Weekes and Ryan Seaman on our cover again.

iDKHOW have gotten as far as they have through amazing songs and sheer determination. The history of where they were with their previous bands has been well documented. Weekes and Seaman were two longtime friends who enjoyed each other’s company and held a profound respect for their musical abilities. That comes out in their live shows and their quirky, slightly askew videos. But if you ask either gent about what completes their experience entirely, it’s the same answer: the fans.

Read more: Dallon Weekes says the new iDKHOW album is “all over the place”

“It would be a mistake not to acknowledge that there were fans already there ready and waiting based on the projects that we were a part of in the past,” Weekes says. “That’s something we knew would be a factor when we started this thing, which is another reason why we wanted to start in secret. We didn’t want to exploit those fans. We weren’t telling anyone who we were, playing in dive bars and anywhere we could, trying to get the attention of strangers that didn’t know and didn’t care who we were. And those fans, those that discovered us on their own or by word of mouth, we belong to them.”

Weekes will admit to some frustration that his band’s proper debut album is still on his hard drive. Yes, the coronavirus pandemic tragically put a halt to touring. Weekes’ work ethic (and creative visionary skill) made him double down on everything. As an artist, he wants iDKHOW’s debut to be stellar. But as a man who is grateful to have the ability to make music his livelihood, he’s completely in service to those fans. Trust us, he’s not bingeing on Netflix. He’s only making the best record that he possibly can. And he willingly accepts all that pressure.

“In the connection that exists in a room between fans,” Weekes begins, “I’m always fascinated and in awe of [it]. We’ll go to a new city and play in a room full of hundreds of people who are total strangers to each other. Who knows if they would ever get along outside of that room? But when they’re in that room, there’s one thing they all share in common. And it’s such an honor to be that thing for the night that connects all of these total strangers. Music is the language that I’ve been able to understand and use to connect with people.

“But when coronavirus came around, shows were suddenly not a possibility,” he says. “It made me realize how much I really need to have this in my life, to have an outlet to go play these songs and perform them live for people. Feedback from fans and touring is almost sacred.”

The upside to all of this is that the light at the end of the tunnel may very well be a disco mirrorball. We’ve been hearing that iDKHOW’s debut full-length will be upon us sooner than we think. Sure, their current output is limited to their 1981 Extended Play EP and a handful of tracks found on YouTube. That only makes us more excited for what they’re going to deliver. You know that line about good things and those who wait for ’em? We’ve been waiting so long for iDKHOW to deliver the goods, we’re convinced it’ll be the best album released in the next three consecutive years.

Read more: iDKHOW’s Dallon Weekes has a song with twenty one pilots

Of course, Weekes is far more humble than that last ultra-hyperbolic sentence. When the record is finally out into the world, he’ll feel complete in the eyes of those who matter.

“The fans are supporting this thing,” he says. “They allow me to take care of my family by doing what I love to do. There’s no way that I could ever say how grateful I am for that fact. I’ve had jobs that I still have nightmares about now, down and dirty, garbage jobs that I hated. I’m so grateful I don’t have to do that stuff anymore. It’s because of fans that I’m able to feed my family and pay the bills and, at the same time, do what I love to do. I owe them everything.”

And we here at AltPress are grateful for your support. Please welcome I DONT KNOW HOW BUT THEY FOUND ME to this special collector’s issue of AP!