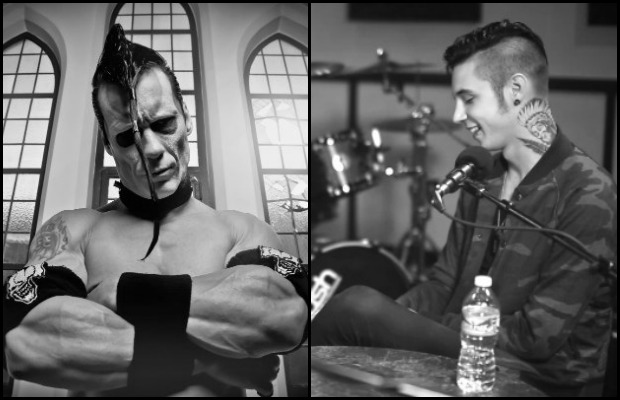 Black Veil Brides frontman ANDY BIERSACK lives and dies by celebrated punk band Misfits. It just so happened that guitarist DOYLE WOLFGANG VON FRANKENSTEIN had released his latest solo album, Abominator, which features former ’fits drummer Dr. Chud, vocalist Alex Story (Cancerslug) and bassist Left Hand Graham, released on the guitarist’s Monsterman label. We were able to get the rock god of lore together with the apt pupil of today to discuss everything from the Misfits’ place in Biersack’s headspace (and punk/metal history) to how technique is overrated to whether or not Doyle would ever be in the same room with founding Misfits members Glenn Danzig and Jerry Only. We can safely say it was a discussion both parties were stoked to be having.

ANDY BIERSACK: I saw you at NAMM briefly for a minute, but I wanted to say hello and thank you for stopping to take a picture. That was very cool of you.
DOYLE: Okay, man. It’s nice to meet you.

I’m going to ask you some questions spanning my fandom of your career with Misfits, as well as your new stuff. As a vocalist, I really enjoy your new singer on the new record, and I wanted to know a bit more about how you met Alex Story and how you came to want his voice in your band.
He’s great, man. I put out a bunch of ads for singers for [my previous band] Gorgeous Frankenstein. His try-out CD was the only one I listened to the whole fucking thing from start to finish. Every other one I would listen to and as soon as the singer would start, I would take it out and throw it in the garbage. There were some people that I found out later were famous and it’s like, “Oh shit, I threw that dude’s shit in the garbage.” But yeah, his songs were greatly written. The recordings were horrible, you know. Some of them were so bad I was just like, “Man, I don’t know if this dude could do it,” so I didn’t use them, and then I started writing again. I wrote like 12–I call them musical compositions. They are written out and recorded in song format, because once I write them I can’t do a melody over it; for some reason, all I see is my hand playing it. I’m saying to myself, “Who do I know that writes great, that I love the way they write,” and the first guy who popped into my head was Alex Story. I immediately called him and he was, ironically enough, walking into a Danzig concert in Houston. So I’m like, “You wanna write with me?” and he was like, “Fuck yeah, I want to write with you! Send me everything.” I sent him three songs; I didn’t want to overwhelm him and just get quantity; I wanted quality, because he is fucking great. One of the songs he did was “Mark Of The Beast.” He sent it back in two days just like it is on the record, and I was like, “That is exactly what the fuck I wanted, and I couldn’t do it.” I just write the shit out. I write a note to him, you know, “the intro, don’t sing; this is the riff, don’t sing, blah blah blah,” just so he doesn’t have to figure it out, and I swear he will send them back in two days, just like you hear it on the record.

In terms of process then, I would imagine this is different than previous stuff or even Misfits stuff, where you are writing separately from one another—or are you writing together, at any point?
We write through U.S. mail. I don’t know how to send songs through email yet. [Laughs]. He yells at me, but I’ll figure it out someday. I don’t know what the fuck I’m doing. We’re never in the same room and that’s it. I write all the drums; I write all that shit and he does the rest.

And you hadn’t worked with Chud since the Misfits then or am I incorrect? Did you guys work together on Gorgeous Frankenstein this record or is this the first time you’ve worked together again?
We did a little, like, five-show tour with Danzig. We opened up for Danzig, and I had Alex and Left Hand Graham, and we played five shows. I was living out here in LA and I went back home, because I needed to see my children, and I wasn’t allowed to see them and a bunch of horseshit. He only lives 20 minutes from where I live now in Jersey and I was like, “Hey, man, you want to be in the band? It’s a lot of double bass [drums], and if you can’t play it, we’ll just throw it in the garbage and we won’t use it.” He had never played double bass. As soon as he tried it, he could do it. I was like, “Why didn’t you ever try it?” And he was like, “I don’t know.” Are you fucking retarded? That’s the first thing I would have tried. [Laughs.]

That’s actually crazy because listening to the record, I could hear that. It’s definitely a different kind of drumming style than any of the Misfits records he did.
Yeah, yeah, yeah and he’s a real hard worker, and we recorded it ourselves. Once we started writing, me and Alex wrote for, like, two or three years straight. We wrote 40 songs, and we’ve already finished a second record. We’ve got 13 songs on it; we just gotta mix it. We bought all this shit and recorded it ourselves. I did the bass and guitar, Chud recorded the drums, and Alex recorded the vocals. Then we started our own record label called Monsterman.

I saw you at NAMM and you were in your full gear. In my band, I wear makeup, and some of the theatricalities are heavily influenced by you guys and what you’ve done in your solo career. Does it ever get tedious for you to put on all the warpaint and everything and be the monster every time you go out there?
Being the monster is easy: Once I finish the eyes, my whole personality just switches to the other one. [Laughs.] The only time it’s a problem is if they don’t give me enough time to get to the show and get to do it. Then I’m in a panic.

Have you ever had any shows where you couldn’t do the whole thing and you had to wing it?
Once I got [to a show] late because there was a time difference. My tour manager didn’t tell me there was a time zone change. We were an hour late, and I had to go on without it. I was so pissed and it was a real horror show, because I didn’t get any water that day, and if you don’t have any water, that’s your gas—you die. You get dehydrated. >>>