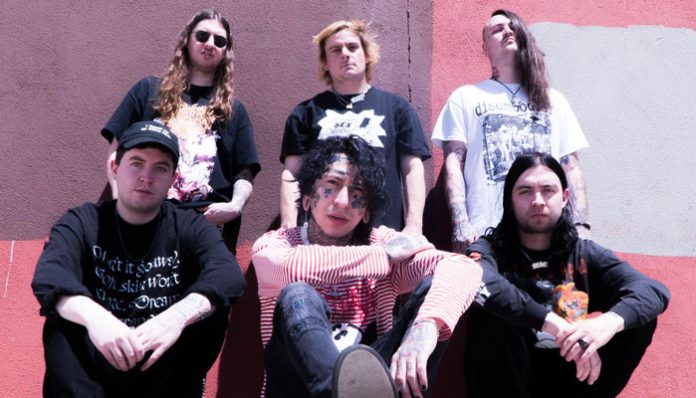 Cynics claiming that the scene is dead might want to sit the hell down right about now. My Poison Arms, the debut EP from post-hardcore outfit If I Die First, is keeping that screamo torch burning. A bona fide supergroup, IIDF feature the talents of From First To Last guitarist Travis Richter, emo-trap artists Lil Lotus and Lil Zubin, producer Nedarb and the Ghostemane rhythm section of bassist Nolan Nunes and drummer Cayle Sain.

My Poison Arms is a true team effort. Richter produced and engineered, Nedarb wrote the guitar and bass parts and the vocalists came up with lyrics and melodies. If you were coming of age through the peak-scene years of 2004 to 2006, you’ll be shocked by If I Die First’s dedication to detail. While they have the screamo vibe down pat, they’re more than just a throwback. The EP is bookended by a crushing 57-second rocker (“No Serenity”) and an aching acoustic song (“I’ll Never Let Them Hurt You”) that will rip your heart fibers right open.

Alternative Press spoke to the band about the impetus behind the project, how it came together and what their future holds. What goes around comes around, but IIDF are dropping a new engine in an old vehicle for new adventures in acceleration.

I was saying earlier to Nedarb that I don’t know what If I Die First’s plans are, but I just hope you have them. Are the band building a time machine or just dropping a new engine in it and chroming everything out for a new generation?

LIL ZUBIN: New engine, for sure. I think it’s inspired by old stuff, but I think it’s still something new. It’s not just like some revival shit. That’s what everyone’s saying it is.

LIL LOTUS: Everybody’s saying that we’re going for the nostalgic vibe, but it just happens. This is what we want to make.

I heard that there was supposed to be someone else in the band.

NEDARB:  We were gonna add a member who only played keys. But at that time, we didn’t even have a second guitarist yet. Instead, we added Travis for guitar and had Zubin do keys while also singing. That was before we even really had one demo. This has been the lineup since we wrote all the songs. We’ve only been together since the start of April.

LIL LOTUS: We were bumpin’ the corona. [Laughs.]

You guys were not doing the social-distance thing.

NEDARB: You’d be surprised, though. I’d be sending songs to Travis. “Where Needles And Lovers Collide” was recorded in completely different places.

TRAVIS RICHTER: We all made a pact at the beginning that we were going to all really isolate and quarantine very hard. So when we got together, we knew that we were all untouched by nature. [Laughs.]

How do you describe what If I Die First do? Some people flinch when they hear the word “screamo.” How would you explain what you do to a server at an all-night diner at 3 a.m.?

NEDARB: I would say screamo, post-hardcore. I’m cool with that.

RICHTER: Screamo! It’s got to be screamo. I’m one of the godfathers. [Laughter.] Round two screamo. Early screamo is way harsh. It’s tight, though. I really love actual screamo. But I do like the gentrified screamo. Saosin, the Used…

Travis, how did you meet up with these guys?

RICHTER: I opened a music venue in L.A. a few years ago, and we throw a lot of parties with Ham On Everything. And he would always have these guys in the venue to perform. I met them from playing at the venue so much. Then I started doing some studio work for them on the side. Ned kept talking over and over. He was trying to find jam space to practice and wanted to put a band together. He sent me a demo, and I said, “Yo, send me the layers of this. Let me mix this. Let me put some real drums to this, and let’s see what happens.” It was really organic.

NEDARB: I’ve known Lotus and Zubin for years now. I met Travis maybe a couple of years ago, but I’ve been real close with these other guys for a minute, just with our solo projects and stuff.

ZUBIN: We would always talk about having a band. But we never did prioritize it.

What’s the connection between SoundCloud emo trap and peak scene? One thing is very minimal in a sense, while the other is all about decibels.

LOTUS: I guess it boils down to the fact that we all grew up listening to those bands and naturally wanting to be in bands like that. We all had our own little bands that didn’t really go anywhere. Except for Travis. [Laughs.] We always wanted to do stuff like that. So naturally those influences carried on with us when we did solo stuff. I have those vocal influences and the way that those bands used to write. I couldn’t get five guys to be in a band with me. I could just go to Ned and get a beat. We’d rather be in a band now.

ZUBIN: I think there’s crossover, but I don’t know if there’s as much as there is for us. We all can listen to Fear Before The March Of Flames and then listen to whatever current rap. I don’t think a lot of the fans that just listen to emo rap or SoundCloud emo would know who the OG bands are. We all grew up in peak scene phase.

This [music] is easier for me just because I’ve been wanting to do it. This has been burning in my soul for years. It’s all I really want to do. So it’s easier for me to get into than making beats.

You’re gonna take If I Die First on the road, right? You’re gonna road-dog it the way Travis did back in the day before the $5K-a-week tour coaches?

RICHTER: I’m wondering if we’ll do a van tour. I wonder if we have it in us. I have one more left in me. After that, I’m just going to get a credit card, and we’re getting a bus.

If I Die First are really a dream team of two worlds. You put out your first record yourselves. Are you keeping it DIY so you have control of everything? I would imagine some label ponying up to offer you a record deal.

RICHTER: People have been hitting us up and are definitely interested. But it’s a weird time with the virus going on and no shows for us to build the band and put out an accepted release. We really want to play some shows. We have another EP in the pipeline. I think it’ll definitely happen. It’s a matter of when because we have the formula.

I think us being DIY about it also gives the music and the release a certain vibe that is connecting with the fans. Something about keeping it a little bit raw makes it feel like even though we don’t want to be a throwback, it does feel like it picks up where that world left off. So keeping it that way is actually really important to us. No rush, man. We definitely see it will happen eventually.

Rock Journalism 101 question. The name of the band. Is it a level of extremity, a blood oath or does it just sound cool?

NEDARB: It’s an ode to my friend. Her name was Chynna. She passed away in April. She was a rapper from Philly, and she had an EP called in case i die first. It’s the themes about different scenarios of what would happen and shit. She ended up passing away. And I just took the name from that. It was truly a tribute.