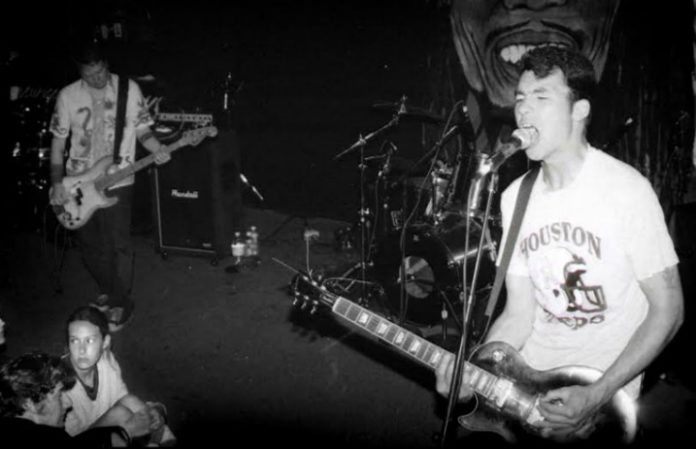 In celebration of their impending reunion at this year's Riot Fest (and marking the day noted on their song “Sluttering (May 4)”), the internet has declared today the day of Jawbreaker. Over the course of 10 years, four albums and about a parsec's worth of road miles logged, the legendary Bay Area punk trio inspired countless bands and enraptured fans with the rhythmic attack of bassist Chris Bauermeister and drummer Adam Pfahler and the literary ruminations of guitarist/frontman Blake Schwarzenbach.

So we may carpe diem this thing up, we're running an excerpt of our exclusive oral history of the band originally printed in AP 266 (Sept 2010), painstakingly compiled by super-fan Trevor Kelley. We've kept Kelley's commentary just as it ran in the issue, with all of the reunion drama/anticipation/yearning intact.

“It was always a struggle,” says former Jawbreaker drummer Adam Pfahler. And at this point, even he must know that’s an understatement. During the near decade Pfahler, frontman guitarist Blake Schwarzenbach and bassist Chris Bauermeister spent playing in their heartfelt San Francisco punk act, just about everything thing they did came with a hefty set of challenges and complications.

It was a challenge, in fact, when they started the band in a New York University dorm in the late ’80s. And it was a struggle when they finally moved out to Los Angeles, and then the Bay Area, where they released three beloved independent albums before heading out on a string of incredibly grueling tours. Then, when Jawbreaker finally drew the attention of the mainstream, following their 1994 opus 24 Hour Revenge Therapy, well, that’s when shit really got difficult.

These days, though, it’s actually quaint to hear the members of Jawbreaker talk about all the angry fanzine writers that criticized the band when they signed to Geffen’s DGC imprint in the mid-’90s. But in 1995, the stakes were much higher when they released Dear You that year. The backlash that followed lasted until Jawbreaker inevitably disbanded.

In the time since, there have been no shortage of struggles. But, interestingly enough, they haven’t always been Jawbreaker’s. Instead, it’s been their fans, many of whom have spent the past 15 years desperately urging the band to get back together. Over the next few years, Pfahler plans on re-mastering the band’s first three albums. (Their seminal 1990 debut, Unfun, hit stores this past March.) That said, it seemed appropriate to round up the members of Jawbreaker, as well as those close to them, to look back at the band’s history—examining not only how it started and why it ended, but whether or not those rabid fans will ever get their wish.