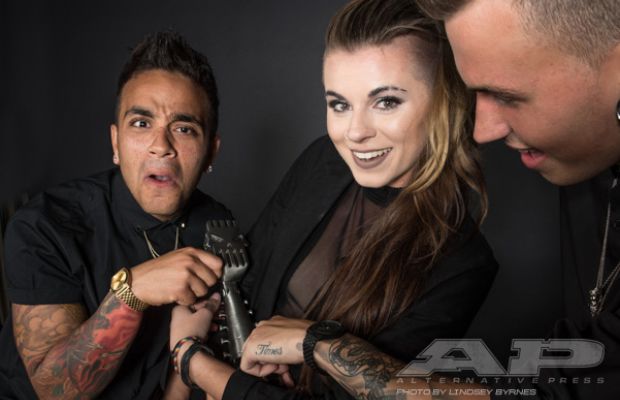 Following a stellar performance of “My House,” featuring a guest appearance from Issues’ Tyler Carter, dark-pop sensations PVRIS took home the award for Breakthrough Band (presented by Splat) at the 2015 APMAs. Right after they accepted the Skully, we sat down for a quick chat with dynamic singer Lynn Gunn to discuss the group’s first national television appearance, her encounter with Hayley Williams, the band’s future plans and more.

Congratulations on winning Breakthrough Band. How does it feel?
It feels pretty awesome. We weren’t really expecting anything, so the fact that we were even nominated and then won is pretty surreal to us.

This was fan voted, and you’ve clearly found a very passionate fanbase this year.
It feels good to know there’s a little secret army out there.

It seems like things have been happening for you very quickly. Have you been able to step back and process the sudden attention?
Kind of, yeah. Everything has been moving really quickly, but we all are on the inside perspective of it, so we don’t really see it as much. When we step out at things like this we kind of realize, and we’re like “Oh shit, something’s going on right now. Something’s happening.”

So, the scale of an event like this puts it all in perspective?
Definitely. It’s awesome to know that hard work does pay off. We’re super grateful for everything.

This was your first time performing on television too. Was that nerve-racking to prepare for?
Oh yeah, absolutely. We didn’t have in-ear monitors or anything either, so we were like “I hope this sounds good.”

It sounded great. You performed “My House” with Tyler Carter of Issues. What was it like having another vocalist in the mix?
Yeah. He’s our homie. It made it less nerve-wracking. It was like having a little support system.

And he played at the last APMAs. Did he give you any tips beforehand?
No, he just said “We’ll kill it.”

Aside from winning the award, what’s been your favorite moment of the show?
I won’t lie, I’m a very big Paramore fan, and I met Hayley and she said some very nice things and we had a nice little talk. That was definitely the highlight.

That was your first time meeting Hayley?
I saw her when I was in seventh grade or something, and this was my first time seeing her again since then. It was pretty magical. She’s awesome.

What’s next on the radar for you?
We’ve got Reading and Leeds at the end of August in the UK, then Circa Survive in September in Australia. Then we have a full U.S. tour, but I can’t say who it’s with yet. But it will be announced soon. Lots of touring, lots of scheming, lots of writing. We’ll be busy.

Rocklahoma postpones 2020 festival due to coronavirus