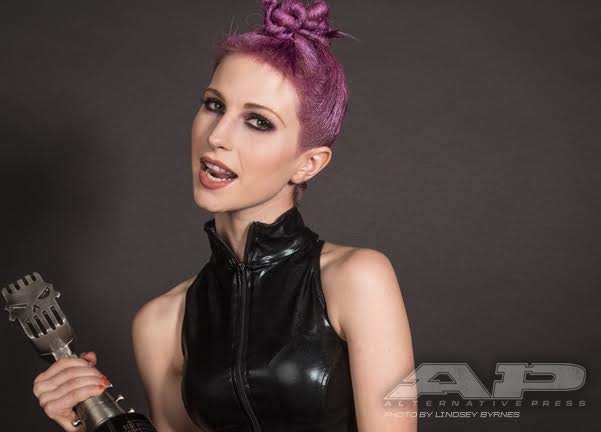 Hayley Williams of Paramore stopped by the APMAs to join New Found Glory on “Vicious Love,” but also managed to pick up a Skully for Best Vocalist while she was there. We sat down with her to talk about finally meeting Lynn Gunn of PVRIS, the end of the self-titled era, and true love.

Congratulations on your win, how do you feel?
Awesome! I don't know if I've ever won an award for vocals specifically, so it's kinda cool. I think it's cool that there's a category for vocals here, especially in this scene. It felt good. It was really nice.

What did you think of your competition?
I was actually just psyched to be in that lineup of people, because I pretty much know all of them. It was really cool to see Lynn Gunn. I love that [PVRIS are] killing Warped Tour right now. I'm watching from afar a little bit. It's nice that there's another girl that sings really strongly over guitars, and it's really translating from stage well. I was—oh my God, I almost said I was “gunning” for her, and then I realized her last name is Gunn. That was so cheesy!

Very nice, very nice. You didn't even try.
I didn't!

Any information you can give us on the next Paramore album?
Oh, I can't give you any information on it! Is that helpful? [Laughs.] We really have been home working slowly. It feels better that way. Most albums—between albums—for Paramore were always so rushed. Even between Brand New Eyes and self-titled, there was more time in between than what is normal for us, but we put out an EP, we kept touring. So it feels good to work slowly and see what comes out of it that way.

You said the self-titled era is over. So what's next for Paramore?
I mean, that's the scary and amazing part. To be honest, I'm still in mourning a little over the self-titled era. It was such a happy, wonderful time for our band. Our band's been through a lot of ups and downs, so it was nice to just have those three years of exciting adventures. I'm definitely in mourning, but I'm really excited to see what happens next, because I never would've predicted the self-titled record. That makes me hopeful for the future.

How did you and New Found Glory decide “Vicious Love” was the song you wanted to collaborate on?
I knew they wanted a female vocal on that song particularly. When I heard that, I was like, “Here I am! I'm Hayley. From Paramore.” But seriously, I'm such a fan. Like, beyond Chad, I love those guys so much. From day one when I met them on Warped Tour, we've just become such good friends with them over the last few years. I really wanted to do it just for personal reasons, like just that friendship-hang situation, but I love the song.

So they already knew that was the song they wanted. I know it's inspired by your relationship. Do you think you wanted to show a different side of that relationship?
Yeah! Even with “Still Into You,” and “The Only Exception” as well, actually. To me personally, it's more convicting to talk about the stuff that's hard about love, because I don't think I really believed in it when I started to experience it. I like to keep grounded in that, and that it feels very impossible. Sometimes even when it's happening, it still feels impossible.

I think people relate to that a little bit more.
That's good, I like that. Because the fairytale is nice and all, but it truly doesn't exist. I don't mean that in a pessimistic way.

Sometimes the reality can be just as nice.
Exactly! I love the reality.

I'm just here to give you your pep talk.
[Laughs.] Thank you, thank you.