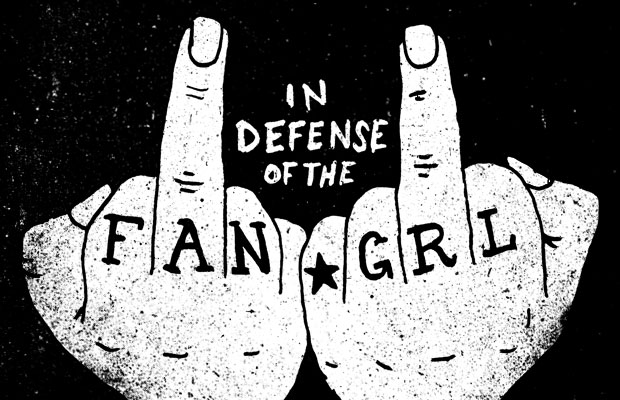 Our scene has a huge problem with girls. One search of the word within our recent Facebook comments will show you all manner of vitriol aimed at young women, including but not limited to:

“Just because the majority of their fans are girls does not mean that they're a bad band. Don't ever judge a band off their fanbase.

I love how everybody thinks that bands with mostly-male fans are “legendary” and make “fantastic music” but as soon as a female-appealing one pops up, they're suddenly shit.”

“AP's hate comments on just about every band they post about is actually worst than the “fangirl bands” & “fangirls” they constantly bitch about.”

“What is so wrong with being a 15-year-old girl?” has been my mental response to such venom even since I was, well, a 15-year-old girl. Now I say it with sass, narrowed eyes and a few swear words thrown in and can write off those comments for what they are: blatantly ignorant. But as a 15-year-old, it wasn’t so easy.

Flashback to 2005: I was that reviled age and waiting in line, clutching tickets for my first My Chemical Romance show (which I had cried and screamed over at my birthday party the week prior). I heard the man in front of me going on about “stupid, little My Chemical Romance fangirls” wearing the band’s T-shirts and “ruining” the show. I looked down at my brand new MCR shirt and hoodie and turned my back, self-consciously zipping up. It was easier then to think, “Is there something wrong with me? Am I stupid? Maybe he’s right. I can’t act like a stupid fangirl.”

What I hope you will take away from this is that you should not think that or be afraid of being a “fangirl,” because what I should have thought back then was, “How pathetic is it that a 20-something-year-old guy is picking on young fans who are showing their enthusiasm for a band they like?” So what is so wrong with being a fangirl? Why are people afraid of the passion of young girls?

Actual instances of stalking (which are not okay under any circumstances) and blind following of things that are problematic aside, if someone likes a band in the way that makes sense to them and is not hurting you or anyone else, then I have to ask again, What’s the problem?

And if you’re here to argue that musicians having fangirls discredits them, then I would ask you to think deeper about why you think that. What is implied when someone says “fangirls are ruining the band” is:

AP contributor Annie Zaleski wrote eloquently and extensively for the AV Club about such overshadowing of the musical merits of teen idols. “Teenage girls, the major audience for teen idols, aren’t given enough credit for being savvy culture consumers,” Zaleski wrote. “The possibility that they could appreciate and want to hear music with substance (and not just blindly worship the cute guy or perky pop star) often isn’t even considered. Besides being insulting and sexist, such assumptions are also wildly incorrect.”

But what is too much? By some standards, wearing a band’s T-shirt to a show is excessive. By others’ standards, plastering one’s room with posters is. “Too much” can’t be defined universally.

And being a15-year-old? Yikes! Want to know what young people are facing? Being too socially aware for their hometowns where teachers shut them down in grammar class for introducing them to gender-neutral pronouns. The pain that simply comes with being a teenager. The uncertainty of their futures. The pressures of their parents. Being regarded as a marketing demographic rather than a human being. Potentially struggling with mental illness, perhaps with unsupportive parents who won’t get them help. Having some of their their earliest (and thus most painful) encounters with racism, sexism and homophobia. And to top it off, the constant invalidation for loving and taking comfort in something positive that helps them escape that psychic maelstrom.

So is it really a crime when a young girl wears her Motionless In White hoodie like armor, paints her face and plasters photos of Chris Motionless all over her walls? If the world doesn't understand her, she at least has the hope their music gives her to hold onto.

Instead, that girl is told she’s “everything that’s wrong with music these days” because self-perceived rock ’n’ roll crusaders need to defend music from the evil powers that, you know, actually put their energy, time and money into (gasp) actually keeping the music world alive.

And demonizing fangirls is not an issue that solely harms female fans. A male friend recently confided to me, “Man, I love My Chemical Romance, but I almost feel like I have to defend that as a 20-something man” because of the perception of their fanbase. Because we live in a society where we’ve taught men it’s not okay to like things that young girls do, where they have to explain or completely conceal their own passions.

A fangirl’s devotion is the precise kind of fervor that can't be taught. It's the thing that puts them at the front row of shows now, and later in life, will put them anywhere else, doing anything they want to do. Being able to believe in something with unbridled love is so special and beautiful. Loving something so much it makes you cry and do things others think are “crazy” is something many people may never have, but these fangirls do.

Why does that offend you? Think about it.