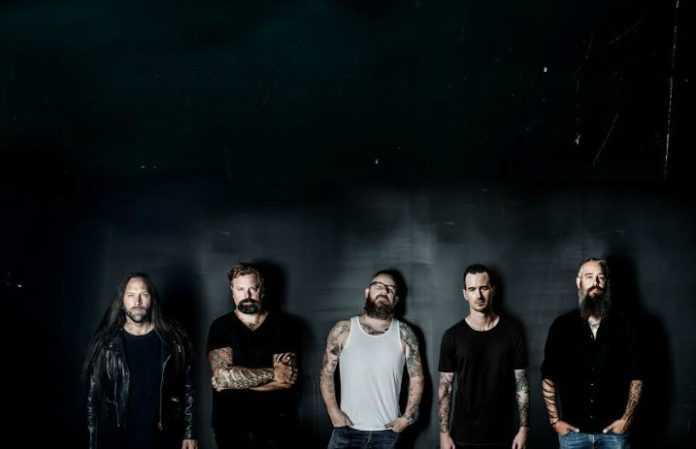 Not many bands find themselves in the press cycle for their 12th full-length, but In Flames’ consistency and staying power has long put legions of their metal brethren to shame. True to form, rife with rich, uplifting melodies and a rousing, cinematic feel, Battles maintains the high standard the quintet hold themselves to while also boasting a compelling freshness.

Of course, their journey has not been without obstacles, and Battles (which you can preorder now on iTunes and Apple Music) is their first release in 18 years without drummer Daniel Svensson. “When Daniel decided to leave [in 2015] it was a big blow, because he is a good friend and was an important part of the In Flames family for nearly two decades. We were also left thinking, ‘How are we going to replace him?’” says vocalist Anders Fridén from his Stockholm, Sweden home, riding out a cold he picked up during an extensive international press tour. “We had a relationship built over such a long time, and that gives you a sense of security when onstage, which is something that can’t be instantly replicated with some new guy.” The band already had studio time booked with producer Howard Benson (Escape The Fate, Halestorm) and were less than enthused at the thought of having to sit through a series of drummer auditions, so they decided to use session musicians and look for a replacement after completing the record.

However, fate intervened when Joe Rickard (formerly of RED) got behind the kit. “Joe was working with [Benson] and he said he was awesome and we should hear him play, and he was right. We would do a few takes of a track and say, ‘Okay, let’s move on to the next one,’ and Joe would say, ‘No, I’m going to do this at least one more time, or maybe five more times, because I want to perfect this’—and we said, ‘Yep, that’s the right attitude!’ We had a few beers and got to know him, and at the end of recording, we told him we wanted him to join In Flames. And he said, ‘Fuck yeah, let’s do it!’”

Having tracked 2014’s Siren Charms during what Fridén describes as “a rainy, cold November in Berlin,” working with Benson meant decamping to southern California, which was “beer, barbecue and metal, 24/7.” With the band firmly believing the environment in which they work influences the sound of the finished product, and ensures every record feels different from its predecessor, the optimism engendered by this change of scenery shines through in the songs that make up Battles. This atmosphere, combined with embracing Benson’s way of working, led to the most enjoyable studio experience of the band’s career. “Working with Howard was very different to what we’re used to. Firstly, he wanted to hear demos for the songs—which we don’t really do! In the past, maybe we would do two or three songs, but then it would be like, ‘We’ve got this, let’s go,’ and everything was then written in the studio. But him wanting those demos brought me and Björn [Gelotte, guitar] closer as songwriters, which was great.”

Likewise, Benson wanted to hear Fridén’s lyrics ahead of time, which was also a new experience. Having never previously received such a request from a producer, with a sly laugh he admits that in the past this meant, “I could get away with a lot of stuff! But Howard wanted to really know what it was I wanted to say with each song, so I had to make sure I knew exactly what that was.”

Perhaps the most prominent—and poignant—lyric on Battles is found during the bridge of the seven-minute epic “Wallflower:” “The older I get, the younger I feel/the younger I feel, the older I seem,” rings very true to the 43-year-old vocalist. “Most of the record was written in LA, but that was something I previously wrote and showed to some friends at home, and those lines really stuck with me. In my 20s, the idea of 40 seemed so old, but I still feel that I have something to say with the music I’m creating, maybe even more so. That excites me, and I want to move forward all the time.” This drive has played a vital part in the band’s longevity, and the idea of trying to repeat or recreate the past holds zero appeal. “If I were to look back at The Jester Race from ’96, and in 2016 say, ‘Okay, now we’re gonna make The Jester Race Part II,’ the album we made in ’96 would be extremely pissed at the one that came out in 2016! It would be yelling, ‘What the fuck are you doing? You can’t recreate me, you old fuck, I’m the best Jester Race that there is! Move on!’ That’s how I feel.”