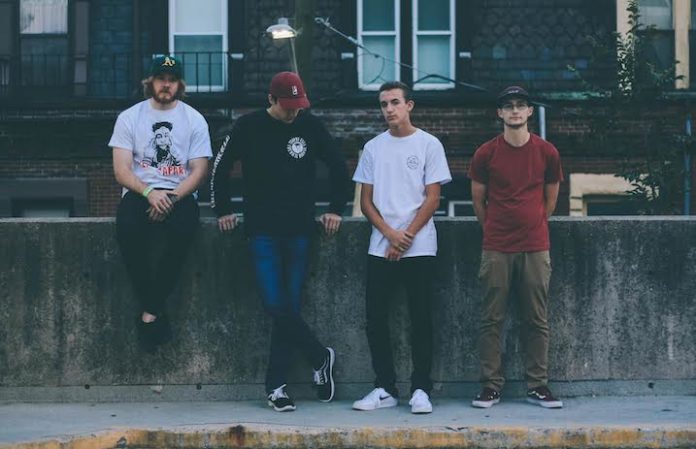 If you like post-hardcore but aren't afraid to admit you also have a softer side, it's time to listen to In Good Nature.

The outfit's releasing a music video for “Weathered,” an emotional track and one of the lighter songs on their debut EP The Words We'll Never Say, released on Aug. 25. You can watch the music video and read our Q&A with guitarist/vocalist Tim Sullivan below to learn more about the band.

The four piece from Worcester County, MA—Sullivan and Sean O'Loughlin on guitar and vocals, Mike Brunelle on bass and Josh Sullivan on drums—formed in June 2016 and began writing and recording songs together. In Good Nature's sound incorporates a mix of early 2000s melodic hardcore and today's emo and punk music.

Watch the music video and read a Q&A with Sullivan below:

Let’s start with “Weathered.” What’s the story behind the song?
The story reminisces on some darker times I was personally going through in my high school days. However, the song in general is about having a falling out with someone and being left with a mass of unanswered questions. Sometimes in life you go through so much with another person and, as soon as that person is gone and out of your life for whatever reason, it almost feels as if all was for nothing. Overall, this song is kind of the closure I never had back then, and it felt good to have it be a part of this record.

What can you tell us about the music video?
I wanted to leave this video's concept up to audience interpretation. But, all in all, the idea I was going for with the storyline was to have the flowers represent the relationship or bond with said other person that I stated previously: us walking with the flowers while mouthing the lyrics to show time passing and the flowers being dead at the end of the video to represent the actual falling out itself. I was definitely going for a “deeper meaning” vibe with this one. Our friend Matthew Hamer shot and edited the video for us. We chose to shoot the live shots in an abandoned cabin in the woods behind my friend's house. The story scenes were shot throughout Worcester and Leominster, MA.

For people who haven’t heard your EP The Words We'll Never Say yet, how do you think “Weathered” represents it?
Although its definitely the softest song on the record, we feel that “Weathered” stands out among the rest and hits closest to home, lyrically speaking. We have a lot of heavier, more aggressive jams on the EP, so we really wanted to have a lighter, more emotional song to break things up a bit and appeal to a more diverse audience.

Describe your EP in three words.
Aggressive, experimental and catchy.

Which band/artist is your favorite to follow on Twitter and why?
Counterparts because it's 90 percent “shitposts,” but they somehow promote themselves phenomenally through the “shitposting.” Respect.

How did the band get started?
The band initially started as an acoustic duo between Sean and I in the summer of 2016. We busted out all of the jams you hear on the EP in a matter of weeks, demoed them out, then got Mike and Josh on board and started practicing/improving the songs. Before you knew it, we were in the studio tracking the record.

You’re a fairly new band and you already got signed by Anchor Eighty Four. Tell us a little bit about your trajectory and how that happened.
Our friend John, who is also the producer of the EP, gave us quite a bit of pointers on shopping the record around. So, that definitely helped out a great deal. We spent months on end shopping it after the masters were done, but had no luck. Had a couple sketchy offers, but nothing that we were truly hoping for. Patience definitely played a huge part in this process. We had the masters in our possession for several months before we broke any ground whatsoever. Then, fortunately enough, I got in contact with Nick Zoppo (Heart To Heart) after he expressed interest in picking up bands to manage on Facebook. He was instantly stoked on the jams when I sent them his way. One thing lead to another, and boom. We linked up with Cody for this release, and we couldn't be happier with the results so far.

What do you think are the most challenging parts of being a band today?
Managing finances is definitely a big one. Scheduling is another for sure. But one that stands out in particular for us is not getting our hopes up too high for certain things. We're on a constant grind day in and day out with this band. So, it can be rather discouraging not seeing results right away, which I feel a lot of smaller bands can relate to. Regardless of the challenges, we continue to grind and strive to achieve our goals every single day. Hard work pays off and that much has been proven so far.

What about the best parts? What do you think makes it great to be a band in 2017?
The best parts about being in a band is seeing your hard work pay off, making new friendships and connections, playing shows, making records and overall just having fun doing what you love. Being a band in 2017 is such a unique thing. I find it so cool that I can see bands as small as we are and just know that within the next year or so, they're going to blow up. It's incredibly surreal.

We noticed you guys are wearing Title Fight and Movements shirts in the “Weathered” video. What are some your influences?
Title Fight is definitely a huge influence for all of us. That band is unmatched by anyone in their genre. Movements are also inspiring to me personally because they're a relatively new band and seeing them do so many great things right off the bat is so fucking cool. As far as influences on our band go, Silverstein, Underoath and pretty much any other early 2000s post-hardcore bands or pop punk bands make the list. We all have so many personal influences, so as a band, we try to compile them all together to create a product that not only we're happy with, but our listeners are happy with.

You’re going on tour with The Weekend Classic in November. What can people expect from your shows?
You can expect riffs, harmonies, Sean drinking a lot of beer, etc.

Being a fairly new band, what’s your touring experience been like up until now?
We've only done a weekend tour up to this point, but nothing but good experiences so far. Traveling went smoothly, shows were cool, ate tons of WaWa. It was tight.

What would your dream tour line up be?
As far as seeing our dream tour lineup goes, we collectively have too many bands to name—more than you could count on two hands, realistically. Three bands it would be sick to tour with for us would probably be Silverstein, Counterparts and Trophy Eyes. That would be too stacked!

If you could choose only one thing for people to remember about what your band, what would it be?
Our diversity, probably. As a band, we really do try to keep things as interesting as possible, and our goal is to appeal to multiple audiences—hardcore, post-hardcore, pop punk, whatever it may be. If we can fit in with any of those successfully and be remembered for that, I'd be content.

What can we expect from In Good Nature next? New music, more tours…
Definitely some of both, but in the coming months, leaning more towards the touring part that we hope to announce soon. Expect many great things for 2018!