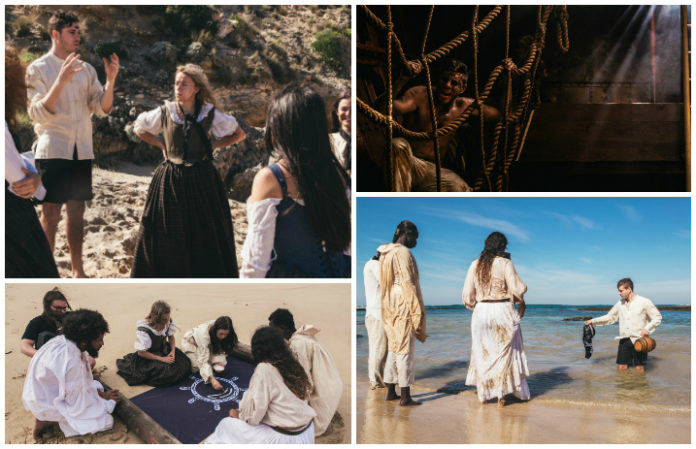 Australian metal group In Hearts Wake premiered a music video for their single “Passage” recently – and we have an exclusive behind-the-scenes look into the making of the video.

Their upcoming album Ark is set for release May 26 via UNFD. Check out their video and upcoming tour dates below.

Besides just being interesting to watch, the song and album reveal a deeper story about humanity and our natural resources. The band teamed up with marine charity Tangaroa Blue to launch We Are Waterborne: An In Hearts Wake Initiative to help clean up polluted waterways near the eastern Australian coast.

“This record is an ode to the ark that is our ocean planet,” says vocalist Jake Taylor. “Just like a ship, if one part is compromised, all life is threatened. What happens on one side of the world affects the other. If we don’t work together to repair our home and restore the integrity of its natural resources, we will all go down with the ship.”

Check out the photos below—and the bands’ descriptions—to see what all went into the music video for “Passage.” Also, try to see if you can spot the bigger picture metaphors here and in the video.

Photos courtesy of In Hearts Wake

There have been moments in life when I’ve had to stop and think to myself: “Wow, music brought me here.” Being out at sea on a replica of an 18th century sailing ship was one of the coolest things we’ve ever done. I asked the actual captain of the Enterprise and his quarter master if they would wear costumes and star in our clip. For not having any acting experience whatsoever, they did such a great job. Here you can see them pulling at Kyle from either side as he is tied to the rudder.

When my mother and I were writing the story for “Passage,” she had this groundbreaking idea of removing the eye from the “Passage” icon, placing it on my head, and using the empty wheel as a flag aboard the ship. This required an important scene where the blindfolded survivors salvage the flag from the shallows. Having to lay the flag out in the water for the camera turned out to be a lot harder than we thought.

Here, I am explaining the action of how the blindfolds needed to be removed for the awakening scene. This was my first time being involved with such a large set of extras, and as co-writer, I definitely felt it necessary to try communicate the action and emotion the survivors had to express. The extras absolutely nailed it.

“Tier” was a champion on set. He had to lay on the shore motionless for 30 minutes while the cold tide lapped his body. Then we asked him to sit out on a rock in the cold ocean and mix ochre. For those of you unaware, ochre is a clay substance from the earth that, when mixed with water, becomes a natural paint. It was a method used by many native cultures.

After being out under the scorching Australian sun for eight hours, shooting the final scene was a moment everyone had been waiting for. We were on a very tight schedule, with the hull scene still needing to be shot later that night. The drone operator turned up just in time, and we laid out the shipwreck debris and began painting the eye. Was such an extraordinary experience having thought this stuff up in my room and then seeing it happen on a beach before your eyes.

Okay so the hull scene was quite painful for the extras. The coiled anchor rope was very uncomfortable to lie on. Chris Elder, our producer, put his hand up bravely to be on the bottom, piled beneath three other bodies. All were required to remain motionless for continuity throughout the takes. It lasted about an hour. Groans of pain could be heard from him as the circulation was cut off and his legs became numb. No pain, no gain.

We’d all been up since 5 a.m. shooting the beach scene, and it was now 10 p.m. at night. Perfect for getting into the character of a deranged and tormented spirit trapped in the hull of a ship. After all the plotting, procrastination, preparation and hard work that went into the making of this music video, I was finally able to get into character, and it felt like a release of pent up energy. All in all, it was quite fitting for the hull scene.

Ryan [Mackfall], the director, had the idea of getting me behind the ropes, which were hanging on the inside of the hull. They were an unexpected prop and we went all out with them as if I were in the circus. I crouched up on a ledge and swung out and delivering lines. Turned out better than we could have imagined as the gaffer swung lights through a grating above.

Preparing for the final takes at 11 p.m. and the makeup lady (Alex [Marshall], who absolutely killed it, btw) was pouring bottles of cold water on me to make it look as though the hull scene had just entered its final level of intensity. We really went out on a limb to bring this ambitious story to life, and I couldn’t be happier with how it turned out. Such an amazing team of creative individuals to work with.

Tour dates with: While She Sleeps, Crossfaith and Polaris