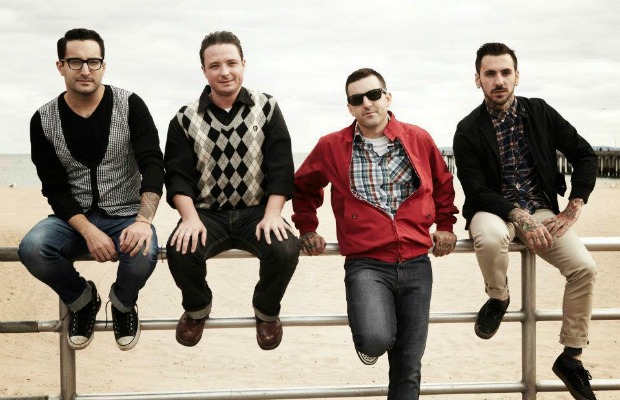 After a lengthy stint on Victory and releasing their latest full-length, 2011’s Killing Time, through Wind-Up, Bayside are back to being free agents. And they're taking advantage of the opportunity. Hitting the studio with Shep Goodman—who produced Bayside and The Walking Wounded—the band are putting together a not-so-standard EP of covers, in which the punk-rock quartet take on Elvis Costello, Del Shannon, Billy Joel and more. AP caught up with frontman Anthony Raneri to chat about the ’80s, Justin Timberlake and the heavy load going DIY brings with it.

For your covers EP, you went with songs from Van Morrison, Del Shannon and Elvis Costello, which definitely aren’t your standard punk-rock covers. Why did you forgo what most bands in your position would have picked?
We just don’t listen to that standard stuff. In our generation of bands, it’s been pretty popular to do ’80s songs because that’s what our fans would be into—they have that ’80s-nostalgia that has been happening. We don’t like that music. I hated the ’80s. I just figured we’d go with the oldies, which is what we grew up on. We first found out about music through what our parents were playing, and we wanted to cover songs that we grew up on.

Which song resonates with your childhood the most? Do you have a favorite?
That’s tough, and I’ve been thinking about it because we’re obviously going to have to release a track online for people to hear. I have no idea what I would pick, but I think the Elvis Costello cover is coming together really well.

Are you going to perform the tracks live at all?
[Laughs] We do need to take the time to work out live versions of [these songs]. It’s funny because when we write, especially when Jack [O'Shea, guitar] is writing his parts, he’ll write a solo or lead that’s four different guitars and that’s how he conceptualizes it. So when we go to do a song live, we have to transpose our songs to one guitar [track per person]. And that’s how we write all our records, so when it comes to [playing live], we have to re-approach our songs.

You guys throw a cover song or two into your sets when you’re headlining, so was this a long time coming?
Yeah, we do a NOFX cover of “Linoleum,” and we’ve been doing a Weezer cover for the past year-and-a-half. One time, NOFX had us come out on stage and open their set and play “Linoleum” instead of them to see what the crowd’s reaction would be if these four younger, skinnier guys came out on stage and played the song. It was funny, half the crowd was kind of looking and didn’t know what was going on and the other half had no idea what was going on and that we weren’t NOFX.

Right now we happen to be in between labels, so before we go sign to the next label, we figured we’d take advantage of being free agents and self-release something. If we did an EP of originals, we’d be half-way done writing the next album and then have to start over. We’d rather keep what we’ve been writing, so covers was the logical go-to then.

This is getting released through your own label, Gumshoe. Did the success of your solo EP, New Cathedrals, help you decide that doing a Bayside EP completely DIY would work out?
I approached [New Cathedrals] thinking it would be on a smaller scale. I had these songs lying around and do solo tours, and I figured there were some Bayside fans who were interested in what else I had. I figured if it sold a couple hundred copies that would be cool. It obviously went way farther than that as far as how it sold and the reception, but I managed to juggle a self-release and it was a success.

Going into this, it is already proving to be substantially more work than the solo record. I didn’t realize how difficult it would be to do the licensing to the songs. It’s not that hard, but doing it for the first time without [someone to help] was difficult. We don’t even have a manager right now, so we’re as DIY as we were in 2000 when we first put our band together. I even own the merch company that’s doing our pre-orders, so it’s incredibly DIY. When you don’t have somebody to go to for advice, who do you call? I just had to go online and learn. I like to bite off more than I can chew and then I figure it out.

The record title is rendered Volume 1. Are there plans to do more volumes?
Definitely. We meant for that to put in people's minds that this is a “thing” we’re going to be doing. It’s something that will be addressed in the contract negotiations with the next label whether the label puts it out or we can retain the rights to release cover EPs. I’d love for it to be a part of our next contract, but if that’s not what happens, there’s gotta be something in there that’s agreeing to [let us] release our cover records.

You guys went back to Shep Goodman for this. How’d that happen?
He played a really big part of the band when we were coming up, and he produced [Bayside and The Walking Wounded]. He taught us a lot about songwriting and recording and about being a band. We went off to do records with other people, but we took those lessons with us. When you’re a band and looking for someone to work with, you want an outside opinion because the guys in the band are attached to everything they wrote. That’s sort of the main job of a producer—to be a fan. They’re supposed to be an outside opinion saying, “Okay, I see you loved it, but as someone who didn’t write it, I don’t get it.” Most bands don’t work for the same producers for too long because then that producer becomes like another member and then you don’t have the outside opinion. If you have the same brains in the room all the time, you’re not getting what you need to out of that relationship.

We just figured it would be good to get in a room with him and make music again. This whole record was about having fun.

A lot of long-term or “legacy” acts have been saying that about where they are in their careers—“I can finally write records for fun again.”
That word “legacy” is something that’s started to get tossed around lately and it’s weird. It’s sort of a dirty word because it makes you feel old, like you’re doomed to never make a single new banger again. It’s scary, but it’s an honor.

We come from a really specific scene—as fans and as a band—and when we first signed, there were only, like, three or four labels to sign with. We were like, “Who are we going to sign to? Victory, Vagrant or Drive-Thru?” A lot of those bands [from that time period] are gone and for us to keep doing what we do at the level we get to do it on is incredible.

It’s sort of like how there’s the Backstreet Boys and the boy-band thing. At the time, you had your heyday, but now you’re the butt of the joke. Whereas, like, Justin Timberlake is stoked because he made it out alive.

He transcended the cliché of that era.
Exactly. He still has a vibrant career and didn’t get swept up in the commotion of that very specific niche in music. If we could be [the Justin Timberlake] of the scene, that would be incredible.