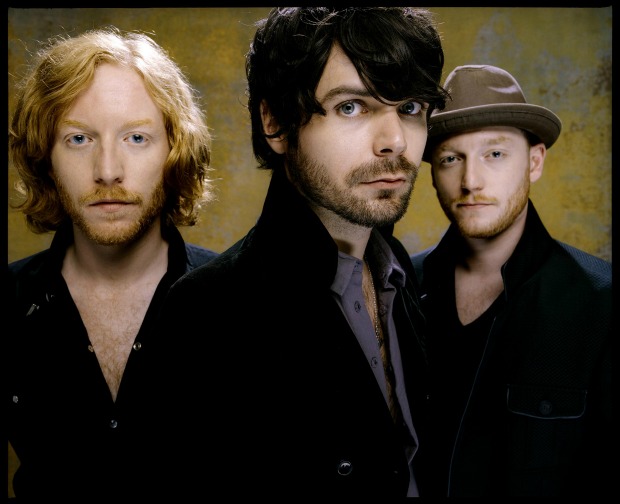 Nearly three years have passed since the release of Only Revolutions, and Scottish band Biffy Clyro are more than ready for fans to hear new music. AP caught up with frontman Simon Neil to discuss the band’s early-2013 release (and their sixth studio album), Opposites—a double album that not only takes chances with modern music-consumer habits but sonically, as well (think: mariachi bands and kazoos).

The recording process is in the final stages, right?
SIMON NEIL: Yeah, we’re close. We’ve got another two weeks of mixing to go. It’s been quite a long haul. We spent about four months recording in the Village Studios in Santa Monica, California, with Garth Richardson, who worked on our last two records. It’s been great fun; we love being in the sunshine. [Laughs.] We like to leave Scotland when we’re recording so we’re not just stuck inside all the time.

Is there anything specific you’re focusing on with the last bit of mixing, or is it more technical finishing touches?
No, we try to keep away from the technical aspects. We know what we like to hear, but I think it’s important when you’re in a band to judge the feeling of [the music] and how it makes you feel and whether it hits those spots for you. So for me, the hard work is really done when we’re doing the recording, and the mixing’s a bit easier, because you just get to hear the product of your hard work.

We do have some interesting additions to some songs on this record. We’ve got a mariachi band on a song, and we’ve got a tap dancer on another, so it’s been interesting to try to mix those things. We’ve got kazoos—almost a kazoo symphony I would say, on a song. We’ve been moving forward to complete this kind of large-scale rock record. And this one, with it being a double record, we’ve just gone over the top as [much as] we can. Any kind of fun idea that we had, we followed. And 90 percent of the time, it’s worked out, so it’s been going really well. It’s still definitely a rock record; there are still really heavy moments. But I think we’ve gone slightly weirder. We just decided to go down as weird a path we can. It’s exciting. It definitely feels like this is as far as we can push this side of our band. So I think after this record, we will go through a reassessment of how we can work on our albums. But it feels good so far. We are really buzzing for people to hear it.

It makes sense that you can push the limits on a double album when you have a few more tracks to work with. And it’s an ambitious choice at a time when many listeners often only buy one song at a time.
Yeah, I think we’re trying to do it kind of old-school. Not react against the way music is consumed now, but we do want to make something that really is a full piece of music. You have to kind of invest yourself in it. Quite often people’s connections to bands—sometimes feels more and more shallow because people are only digging one or two songs by a band. But to me, I love to fall in love with every aspect of a band. And when we imagine people listening to our band, we want it to take over. [Laughs.] I’m sure every band wants to, but we definitely want to embrace the old-school way of looking at it, and really making a piece of art that people can get to know, and it becomes a companion for years, hopefully. We want to make music that people still listen to in 10 years and they go back to, and just have a favorite record, rather than just a song that you like for a week. It’s kind of opposite of why we make music. It should be entertainment, but it should also be hopefully a life-long friend. It’s what all the best bands do. That’s what we hope to achieve.

During recording, you set up a live-streaming web cam, dubbed “BiffyCam.” Why did you decide to broadcast what was happening in the studio?
I think there were a couple reasons. We had six or seven months off when we were getting the record together and waiting for Garth to finish with a couple of other albums so we could start to record. So one thing was to let people know what stage we were at in terms of making the record—that we weren’t sitting around, twiddling our thumbs. And also, I think when I was younger, I would’ve loved to have seen how a record was made. I think we just wanted to give a glimpse into how we were making this album, basically, and to say thanks to people for having patience with us. We wanted them to see hopefully the honesty in what we’re doing…To want other people to get involved and come and see your band and start to dig your band—you’ve got to care about it more than anyone. I think it was important to represent how much work we’ve spent on it. And also to just kind of see it as fun. Sometimes you can make a record that’s quite intense, and some days you want to just burst into tears, and some days you’re just having the best day you’ve ever had, so I think it’s also important that people can see the highs and lows of it. But primarily, it’s hopefully to show people they can do it, too. [Laughs.] So hopefully it was a treat for people. We were kind of on our best behavior, I have to say. [Laughs.]