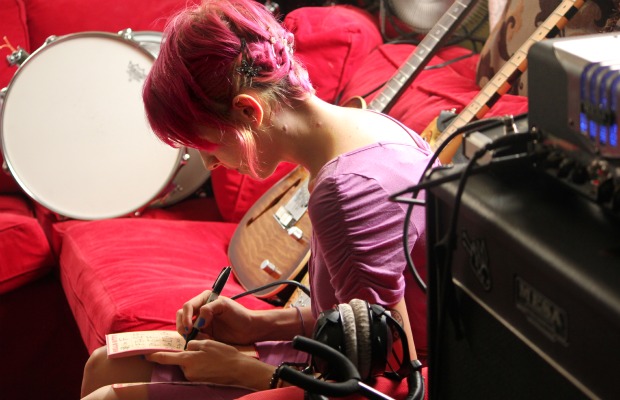 Eisley recently finished recording a five-song EP at home in Tyler, Texas—more specifically, at guitarist Chauntelle DuPree’s house. While creating albums at home is fairly common these days, consider that California-based engineer Andy Freeman actually transported his gear to Texas for the sessions. “I just assemble [the equipment] in San Francisco and freight costs remain pretty cheap, so I can take A-list gear just about anywhere,” he says. AP recently caught up with Freeman while he was at Chauntelle DuPree’s house; in a separate conversation, vocalist/guitarist Sherri DuPree-Bemis, who was in New York City at the time, filled in more details. “I really feel confident in this project,” DuPree-Bemis says about the still-untitled EP, which is being released on Equal Vision. “I definitely think this is a true Eisley fan project. New fans will love it as well, but I think fans who have had a long history with us will appreciate it even more. You can tell we weren’t trying to please anyone but our fans and ourselves.”

What does the EP sound like?
Sherri DuPree-Bemis: [It’s been a few years] since we did The Valley, even though it just came out technically not too long ago. [But] it’s too soon to put a full-length record [out], [so] we decided it’d be cool just to do an EP, with maybe just some B-sides from the Valley sessions with some new songs as well. It was just something fun to do to kind of kill time until the next record.

It was kind of a last-minute idea, and no one really had their heads in the game, so to speak, regarding the sound or the direction. It was cooler that way, because it came together as this unique project that has its own vibe. We ended up only using one B-side that had been recorded when we did The Valley, and the rest of it we recorded all new. It’s very musical—and by musical I mean it’s less poppy. It kind of just breathes and you can tell no one’s thinking about it too hard; [it] has this really cool, natural vibe going on.

That makes a lot of sense; with such a short release, you can do stuff like that.
Exactly, you don’t have to think too hard [about things] like, “Okay, this is going on the complete album, it’s got to fit into the project, it’s got to have its place.” It was more like, “Well what do you guys feel like doing here? Okay, let’s do that.” It was a very new experience for us to work like that, especially since we did it at our own homes, and not in a studio.

What’s your favorite song you recorded?
My favorite track off of it is one called “Lights Out.” It’s a new song that we did. I’m very influenced by Sunny Day Real Estate and bands like Starflyer 59, and all those bands I grew up listening to when I was figuring out my writing style—and so I think on that song, I was really allowed to let that come out. It has a very kind of, I don’t know, a Sunny Day rock vibe to it. It’s dreamy. It’s going to be cool. I think fans will like it because it feels kind of like older Eisley, kind of like Room Noises but more mature, if that makes sense.

Lyrically, are there any themes?
It’s probably the most dreamy album—well, project—that we’ve done since Room Noises. We were very young, and we just didn’t really draw on any life experiences [on that album] because we had none, basically. We were just kids, so we made up a lot. It was very fictional; it was very whimsical. [This EP] is a lot more whimsical due to the fact that there was really no pressure to fit in anywhere with an EP. But it was cool, because it will influence us to be more relaxed with our future projects and our next record when you kind of realize, “Hey, who am I trying to please here?”

What was the best part about recording the EP at home?
Oh my gosh, just the fact that you could record in your PJs. It was super fun. I mean, it was really hot. We started out recording the record at my house, but my husband and I just bought this really cool [house]—like, it was built in the [19]30s. It has lots of space, but the one downfall—and probably why we got it so cheap—is because the people who lived there before us for, like, 15 years never installed central AC. So it was miserable.

We worked there for about a week, and at the end of the week, everyone was just like, “Guys, I don’t know if we can do this anymore. I feel like my brain is melting; there is no air.” So we ended up moving it to my sister’s house, which is just a two-bedroom place, so it’s smaller, but they had AC. It was fun. It was all an experience. It’s great just being able to run down to your favorite burrito place, or sleep in your own bed and all that stuff. It was fun.

I used to work from home and I loved how I could be in my pajamas, and I didn’t have to worry about anyone seeing me.
I know! And it adds to the whole vibe of things. I mean, you’re so relaxed, you’re in your element and it’s so no-pressure. It was very liberating to work like that in that environment.

Are there any big-time curveballs or anything that fans won’t be expecting?
There’s one song that we did called “One Last Song.” It starts out just like a classic Eisley song; it’s got a lullaby vibe, it’s very soft—and then right when you think it’s over, it kicks in with this drum fill and this kind of Portishead-type jam-out session with these vocals that are very Beatles-y. That was the first time we ever threw a curveball into a song and changed the time signature halfway through. That was really fun and challenging for us.

That’s exactly like what you said earlier: With it being an EP, you don’t have to worry about where you’d put it in the sequencing.
Yeah, definitely. Now that we’re on Equal Vision, they’re an indie label, [and] it’s such a different working environment. They’re just so chill; they love the band and signed the band for what we are. It’s cool having that, because on a major label you are constantly—no matter how much they love your band—faced with the fact that they need to make money to keep you on their label. So there’s always the pressure to write a certain way and to write a song that’s radio-friendly. I’m not saying you shouldn’t try to write anything catchy, but just not having that hanging over your head—I mean, it was the first time that we’ve never had that, and it felt amazing.