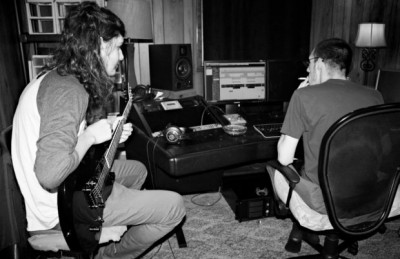 We Came As Romans are releasing their second studio album, Understanding What We’ve Grown To Be, on September 13 via Equal Vision. The album is a long time in the making: Before touring with A Day To Remember in March and April, the band spent nearly a month with producer Joey Sturgis at his Foundation Recording Studio. After returning from Europe in mid-May, WCAR headed straight back there to finish the record. Below, check out an exclusive peek at a lyric video for the new song, “Mis//Understanding.” And be sure to head to We Came As Romans' Facebook page tomorrow to hear the title track!

These two songs happen to be the first and last tracks on Understanding What We’ve Grown To Be—and their release is intentional, says guitarist Joshua Moore. “As the CD goes, the first half is more the darker lyrics, the not-so-good stuff,” he says. “And as [the album progresses], the music gets, not lighter and happier, but more toward To Plant A Seed, how the music [and lyrics were] on that. So, we’re releasing the first and last track and being like, ‘These are what these songs are about—and you guys will have to figure out what’s going in the middle.’”

A few weeks ago, Moore checked in with AP from the studio. Check back tomorrow at altpress.com for more from our chat–and be sure to watch the band's studio video over at APTV too! And in case you haven't heard: WCAR is also on the cover of AP #277, which is out July 5!

With all of the time you’ve been able to put into the album, how is it sounding?
I think that it’s sounding amazing. Definitely better than our last record. As we’ve grown as a band, I think that Joey has really grown as an audio engineer and a producer. I’m really excited to start actually releasing [music] to the public.

To what do you attribute the music sounding better? Is it the studio? Is it the band’s growth as musicians?
I guess I would [attribute] the progression of our sound to both the growth of our band and the growth of Joey and his [skills]. We could’ve grown a ton as a band and [written] amazing music, but gone to the wrong producer or the wrong studio, and still have it not come out the way that it’s going to sound the best. And I’m really, really, excited and really proud of the way that our band has grown musically. Our new stuff is a little different—nothing too crazy, nothing mind-bending, when people hear it they’re still going to know that it’s us—[but] we’re still trying to establish our own sound. I am proud of the direction we’re going and the way the music we are writing is sounding. I’m really proud of Joey too, because he’s just getting better and better at what he does, and I don’t think he gets enough credit for it.

When you say that the music is a little bit different, can you give specifics?
Well, we have switched up tunings a little bit on this CD. To Plant A Seed was recorded only in drop D, and this CD is in drop B, C and D. [And] when we wrote To Plant A Seed, [we] never really thought about how it was going to go down live, never really thought if the transitions between songs would be smooth or anything. There wasn’t really too much thought on being super-professional onstage or anything, I mean, we were all 18 and 19, I think. You know, we were kids—and now that we all take this really seriously, I guess we’re just trying to make everything super-professional.

That makes sense. For instance, touring with someone like A Day To Remember, that’ll help you improve and really take a good look at yourself, because they’re so huge live.
Yeah, they are definitely really crazy live. But I guess if there is anything about our new music that is going to be different, [it’s that] there are songs that are just a little darker musically as well as lyrically. To Plant A Seed was all super-positive messages all the time and this newer CD is just…We’ve been on the road for, like, two years straight. I’ve been home for two days since February so far this year. I actually just missed [the birth of] my second niece because I’m in the studio. I’ve been home for 10 hours in the past two months, two-and-a-half months now.

Is there anything specific that really lead you guys to explore those things?
To be completely honest, I wrote pretty much all the lyrics on To Plant A Seed, like a good 90, 95 percent [of them], and I’ve written all the lyrics for this CD. It’s like my personal diary. I literally have this little book in my room that I handwrote all the lyrics down. When I was showing them to all the guys, like, “Hey, are you guys cool as a band to be playing songs like this,” everyone was really down with it. It’s really personal to me, and to the rest of the guys. It’s my diaries that I’m just kind of sharing with everyone.

That’s really brave to do something like that. Is that scary for you at all, or did it feel like a natural thing to do?
We’ve always tried to be a really personable band. You can’t be a band that’s about building relationships and going through your life not on your own, and not be a really personable band. You have to practice what you preach. When we started writing this CD, I was really thinking about the lyrical content. I was like, “You know, I can’t write another CD that’s just like To Plant A Seed, that’s super-positive all the time, no matter what.” Because then it’s straight-up lying, and I don’t want to lie to the fans that really care about us. So I’m just hoping that the fans that we have are really going to accept the slight change in lyrics.

It’s nothing crazy; we don’t have songs that are like, “I hate life, and that’s it.” There’s still a positive aspect to every song. But it’s more just, real, like how life really is. It doesn’t have the mentality that nothing can ever go wrong anymore, and I’m just hoping that fans are really going to accept that [and] embrace that, because that’s the truth about it.