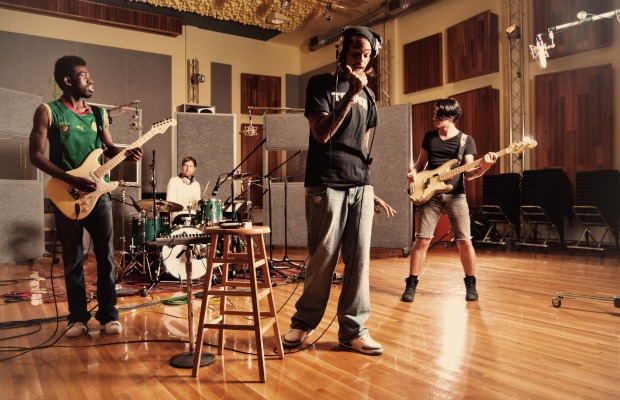 You guys just hopped on Warped Tour. Does that mean you are done recording?
Honestly, it’s just up to me now to knock it out of the park. We have three songs left that I have to finish—and once those are done, it’s a wrap. The rest of the band is sitting comfortably, and I’m biting the shit out of my nails. It’s a good pressure, though. I don’t even necessarily really look at it as pressure; it’s just motivation.

The last record I made was Lazarus, my solo album, which was a feel-good, summertime-pop album. This album’s a little more straightforward—and not to say less fun, but it’s touching on a lot more personal topics and things that have been a dark cloud over my head for the past couple years, but also some of the good points. It’s the two extremes, the good and the bad.

What prompted this record to be a follow-up to The Papercut Chronicles and a return to your roots?
I went back and listened to The Papercut Chronicles. For the first time, I felt like I was listening to that album from a listener’s perspective, as opposed to listening to it critiquing myself or listening to it to go, “Oh man, I made this.” And to be beside myself listening to this album, it almost felt like somebody else’s ears. It kind of made me realize, “Wow. We were really young, but we were kind of fucking awesome.” It just made me really excited.

I called Matt [McGinley, drums] up right away and I was like, “Dude, this next record we have to make, it has to be the sequel to Papercut Chronicles.” On this album, there are definitely some re-occurring themes; some of the characters from the first record [also] pop up. It’s not a concept album at all, but there are things on this album that people who are fans of The Papercut Chronicles will hear, and it will tickle them pink.

I don’t feel like we’re regressing in any way, shape or form; we’re still trying to push the envelope musically and lyrically and whatnot. But the inspiration for this album was revisiting the first one.

Musically, what is the record sounding like?
It’s definitely darker than Lazarus, in a sense. [There are] dark undertones. The past three years I’ve hid a lot of dark things—I hate using the word dark—but not-so-fun things I hid and tucked into pop songs that you can dance to. But if you scratch the surface, you go, “Whoa, this dude needs to be in Bellevue somewhere. Something’s going on with this kid.” [Laughs.]

Anyone who is a fan of Gym Class Heroes will appreciate the record. For me, I think this record is really for the kids who have grown up with us. We’re grown men now; we wrote that album when we were kids. There are kids who have been down since day one who are just as grown as we are, who have families and shit, so it’s crazy. It’s almost an ode to everyone who’s stuck with us for everything we’ve been through the past few years. It’s been an uphill battle; a lot of people think we’ve had it so easy. Us being this kind of weird alternative hip-hop, whatever you want to call it, and doing shows with, like, Fear Before The March Of Flames and Emery and Underoath wasn’t the easiest thing in the world. We took it all in stride, and I think it definitely made us learn how to make a crowd enjoy us.

We use the same approach when it comes to writing and going into the studio. A person who wouldn’t necessarily listen to Gym Class Heroes could hear “Stereo Hearts,” our new single, and be like, “Oh, this is amazing. Who are these guys?” and buy the album and either love or hate the next song. But there’s that core of kids who are going to play every song and show up to every show and sing every lyric.

You mentioned this record being an ode to the kids who have been there from the beginning. Is there anything on this record you think they might not be expecting or anything that might surprise listeners?
Oh yeah, definitely. I don’t want to give it away, but I’ll just hint at it: There’s a sequel to a song that was on the first record.

Do you know when you expect to have the album finished?
The album should be out at the end of September. It’s just some fine-tuning [left]. There’s some things vocally that I’m not happy with. I’m my own biggest hater in the world, but it helps with the end result. I don’t want to hate my own shit to the point I have to push my record back, though. Yeah, so we’ll be good. There’s two songs that are kind of there musically, but vocally I have to do my thing to, but it is what it is.

I just crawled out of probably one of the most, like I said, crippling depressions I’ve ever been through. I get my [down] period every month-and-a-half or so, but this past one was really tough, and getting kicked while you’re down doesn’t help. I lost a few friends and some family members during this period. It opened my eyes in a lot of ways. Once I finally got back on my feet [I felt] like, man, life is too short. You never know when you’re going to lose somebody. Knowing you’re not going to see someone you love ever again, it puts things into perspective. Needless to say, my notebooks have been filling up since I crawled out of the pain cave and put my nose to the grindstone to get this album done.

Is loss—or the attitude of “life’s too short”—a recurring theme on the record? What are some lyrical themes that have been coming up?
I don’t want people to think it’s going to be the saddest album in the world. [But] I always tend to write about things I’ve been through, experiences and whatnot. You know, loss and grieving. Everybody grieves differently. It’s hard for me to go to funerals. There’s this whole guilt that comes with not saying goodbye to someone you love when you have that chance, but you know it’s not healthy for you. There’s a song that deals with that. There’s songs that deal with relationships going sour. There’s songs that deal with trying to find my place in this world, and where I want to settle and be for the rest of my life, and everywhere I’ve stopped in between—things I’ve learned doing that. There’s songs about our fans. It’s just all over the place. That’s also another reason why I feel titling this album The Papercut Chronicles II felt so right, because the first album was just everywhere. Emotionally and lyrically, it was me basically introducing myself to a ton of people I don’t know, like, “Here I am. Take it or leave it.” And a lot of people took it.