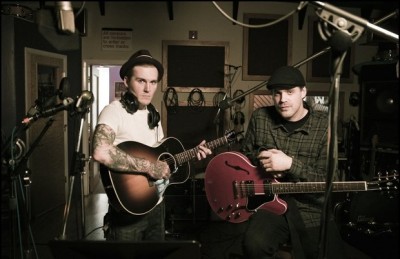 Horrible Crowes, the new project featuring Gaslight Anthem frontman Brian Fallon and pal Ian Perkins, has been described as being influenced by Afghan Whigs, Nick Cave and PJ Harvey. Their debut, Elsie, is due September 6 via SideOneDummy, and was recorded with long-time Gaslight associate Ted Hutt at Retromedia Studios in Red Bank, New Jersey. AP reached Fallon a few weeks ago as they were wrapping up recording (specifically, adding strings performed by the Parkington Sisters), and he filled us in on how Meatloaf, Phil Collins and his time “as an insane person” influenced the album.

How did you approach writing the songs for this album?
[Ian and I] were kind of goofing around one day. Neither one of us drink or do drugs, so [after shows] we kind of just chill out. We don’t have an “after-show” thing. And we don’t like to make the scene so much: I’m tired at the end of the day, and I don’t want to go shake hands and hang out with other bands. They party all through the night, and I’ve just never been into that. We would go back on the bus and go listen to our iPods. We would listen to albums; we would play PJ Harvey, Nick Cave and Tom Waits, the National and the Afghan Whigs. We would go back and forth turning each other on to these different bands that were really sad and kind of dark soul music.

One day we were like, “Hey man, I want to write songs like this.” It kind of came out. I was like, “Yeah, well, whatever.” And then all of a sudden, we actually started writing songs—and two weeks later, there were six songs. We were just like, “Wait a minute.” That’s when I was kind of like, “Hmm, maybe I should mention this to the other guys.” So I talked to the guys in the band and was like, “Do you want any of these songs, for Gaslight?” They’re like, “Awesome, but it’s not really our vibe.” And I was like, “Cool—do you mind if I do it with Ian?” And they were like, “Nah, go for it.”

How long ago was that?
We started writing last September.

How many songs did you guys go into the studio with?
Sixteen.

What was Ted’s role doing this? He did last few Gaslight records, but this is so different. What did he bring to the proceedings this time, with this style of music?
Ted and I talked about this after the [The ’59 Sound], and we said, “It would be really cool to do some hymns and soul music, but really dark, and use drum loops.” We really got excited about that, because Ted and I listen to a lot of Mark Lanegan and that kind of stuff. The problem that I always had with certain songs—I’m not saying anything bad about Mark Lanegan, because I think he’s a brilliant songwriter—but I have that sweet tooth for the Ronettes and the Supremes and that candy-coated chorus. We needed to find a way to bring the darkness into the choruses. Ted and I, that’s our thing; we love that stuff. It always came together where Ted is very good at…you tell Ted your idea, and he knows how to execute it. And he does it in a way that allows you to come through it on your own, but he helps you along. He really gets it.

I see that on the album, you are using the piano that Meatloaf once used. Is that in the studio?
Yeah, it was just in the studio. I didn’t know it at first, and then the guy was like, “You know [Meatloaf’s] Bat Out Of Hell?” I was like, “Yeah, dude, that’s one of my favorite records.” He’s like, “That piano was on that record.”

Whoa.
And we used the board that Phil Collins recorded “In the Air Tonight.” Pretty cool.

Those are some good omens right there. So, did you find yourself wanting to do that awesome drum part from the Phil Collins song?
We actually did that drum part in the record. That was the only time I ever played drums in my life. It was a kit we built out of toms; they were old toms from the ‘60s. I just pounded these toms around us, and we went [mimics the infamous beats from the song]. It sounds like garbage cans. But we did give a little nod to Collins.

You have to. Even if you don’t play drums, it’s such an iconic part.
But yeah—I had never played the piano in my life before. When we were doing these songs, I was like, “Uh oh, man, this really needs organs and piano.” I grew up on church hymns, that was my thing. I grew up very, very [religious, with] church [on] Sunday, church [on] Wednesday, always. Old hymns. I sat down on that organ not knowing what any of the drawbars do, and I literally just played it, and it sounded like it was a church organ on fire. It just went crazy. It was one of those hidden talents I never knew I had.

And it took these songs to bring that out of you.
Yeah, it was very crazy. It was one of those things where you don’t know what you’re good at until you try it.

I know this stuff has been compared to Tom Waits. And what you just described almost seems very Tom Waits-y. He’s very ragtag—you make do, and stuff like that.
That’s the brilliance of it, is that I don’t really know how to play the drums, and I don’t really know how to play the organ or the piano. But the insecurity and the faults in it are what make it so good. There’s one song on the record called “Mary Ann”—it’s a gospel song, but we went for the Tom Waits vibe. It’s really Tom Waits-y. The rest of the stuff, you can hear that influence, but it’s a lot more Afghan Whigs and Nick Cave. There’s a lot of dance beats—not dance beats like Lady Gaga, but there’s drum loops and samples and then real drums. It’s soul music for lonely kids.

What are some of the other songs sounding like? What else stands out to you?
The record opens up with a song that’s only a minute and 30 seconds. It’s called “Last Rites.” It’s just a piano and some organ and the vocal, and a tambourine. And that’s it. It’s a story—the record kind of goes through this process…it’s like every breakup you’ve ever had, where you lose your mind. I wrote about a time in my life that I went through when I was younger. I really needed to get this out—and it was such a weird time, I couldn’t write about it through punk rock. I just couldn’t do it; it was too weird. When I was about 18 or 19, I literally went insane. I was an insane person. I just lost touch with reality.  That stuff has always been kicking around in the back of my brain. I just called it up. I sat down at the table and had coffee with that guy, and I haven’t done that in 10 years. And we wrote a record.

But at the end of it, it resolves. The beginning song is called “Last Rites,” and [the album] ends with a song called “I Believe Jesus Brought Us Together.” You would think that that would be like, “Aw, so romantic.” But it’s not, because that’s not what life is. It’s horrible, horrible circumstances, yet you still bring something good out of those horrible circumstances.

It’s redemption.
It is. And [the record] goes from absolute fall to redemption. It’s really, really cool. I’m very, very proud of this.