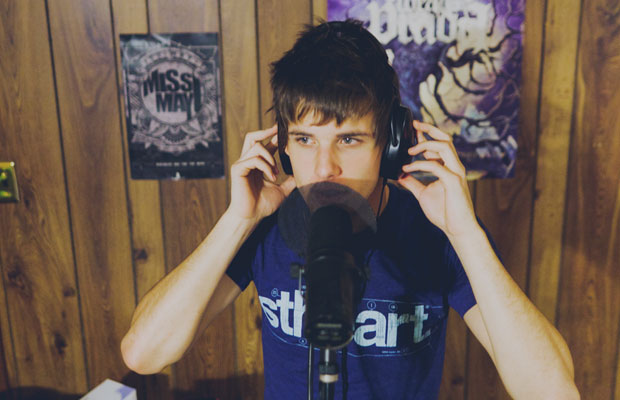 I See Stars have wasted no time hitting the studio to record a follow-up to this year’s The End Of The World Party. In fact, the post-hardcore/screamo/synthcore enthusiasts already have a new album completed, and it’s due in February 2012. Frontman Devin Oliver tells AP what it was like working with producer Joey Sturgis and explains what fans can expect from album No. 3.

What is everything sounding like?
It’s actually sounding really good. We kind of went back to our grassroots on this one, like from our first record. Our second record was a little bit lighter, but this one is obviously heavier, and it has a lot more of an electronic feeling to it. And for the first time, it’s consistent throughout the whole record. We always go into the studio and are kind of writing whatever we feel and whatever comes to mind. I guess this one just kind of came out very consistent. I’m stoked on it.

To what do you attribute the consistency?
It definitely is heavier throughout the whole record.  We spent a lot of time on electronics, so the record came out very electronic-hardcore, kind of like our first record, but it’s to the next level 100 percent.  It’s really cool. I can’t even explain it; you’d have to hear it to understand what I’m talking about.

What has Joey brought to your sound?
With every band, he finds what makes them unique, and he makes sure that stays throughout the whole record. He takes each band individually and does research on them and listens to their past records or past demos or whatever, and really tries to bring out what’s unique about them, while still contributing the Joey Sturgis sound.

On drums alone, he was tuning the drums for about two days straight because he wanted to make sure they sounded absolutely perfect.  We went to Guitar Center, and we spent about two hours [there] with him. He was hitting every cymbal in the place, like, three times. We ended up buying three of the most expensive cymbals in the entire store. The drums ended up sounding really, really, really, really good, even just the raw form of the drums. It was ridiculous.  I heard the raw drums and I was like, “There is no way this is just mic’d drums!” But it was.

That attention to detail is what makes the music better. Especially with you guys–you have so much going on, you have to make sure the sound is good.
Joey is very particular.  He spends a lot of time on every single thing.  With guitars, he’s extremely picky.  He makes sure that every single note is just the perfect strum and the perfect sound. It’s overwhelming.  It’s our record and we obviously want it to sound perfect, but you really don’t have to fight for it to sound perfect because he’s not going to let a bad record come out of his studio.

What is your favorite song so far?
We actually haven’t began to name them yet. I could tell you the first song we did is my favorite. It’s rock and electronic. It’s very…our guitar player Brent [Allen], he has this style that he has always had on every single record and he really shows off on the song and it’s really cool. It’s very Brent Allen, I guess you could say.

Are there any curveballs or anything?
Yeah, there is a song on the record that our keyboard player Zach [Johnson] wrote. He wrote it on guitar and then he wrote electronics. The electronics are super cool.  It kind of gives me a Linkin Park vibe.  It’s definitely the curveball of the record, but I love it. Joey loves it too. Every time we sit down and we’re talking, he keeps talking about that song and how he can’t wait to do vocals and experiment. I’m just like, “Dude, I’m all for it.” I’m all for experimenting with vocals.

What other kind of experiments have you done?
When we did our cover song on the first Punk Goes Classic Rock [compilation], that was the most [we had done] when it comes to experimental things. The first version of the song was really wack, actually. We did like robotic voices and stuff.  Not Auto-Tune; it just literally sounded like it was a robot, and we just did a bunch of different effects. There were even times where I was singing through a megaphone and stuff like that. We did a bunch of different kinds of stuff just to see how things sounded.

When you’re in the studio, even if it sounds like a stupid idea, the possibilities are endless. There really is no such thing as a dumb idea because you never know if it’s going to turn out to just be cool.  Little things can really be the things that stick out on the entire song. You never want to be the kind of person that’s just not down to try whatever, because you never know what’s going to happen.  It could be the gold of the song.

What did you try to go for with this record as far as electronics?
The cool thing is, every single person in my band, we all write music.  Every single person in my band is really good at writing electronic music, especially my brother Andrew [Oliver], keyboardist Zach and bassist Jeff [Valentine]. Those three inherited programs such as  Massive.  Massive is one of the biggest ones that they’ve been using lately.  It’s a program that producers and artists like Skrillex, Deadmau5 and even Dr. Luke, who does all these songs on the radio, use. We’ve been getting to know that program a whole lot.

By the time we got to the studio, each one of us had, like, twenty songs apiece, just individual songs that we wrote. Before we came here, we went to Lake Tahoe in California with our label. We had a great time but we mostly spent our time there in the studio in Tahoe, in a live room with all of us just piecing together these songs and also writing some fresh songs just off the top of our heads. The coolest thing is, once we got to the studio, we spent the first three days [when] Joey was getting the drums all ready just listening to all of our electronics.  There were so many to choose from, and they were all so good.

There were so many perfect fits, perfect like a glove, like a glass slipper.  Everything was just a perfect fit. It was cool just to watch how an electronic part that, say, our bass player wrote fit so well with a song that I wrote. We were just like, “Wow, that is so cool.”

It’s going to be interesting to see how everyone reacts to this record because we wrote it according to what we think kids want to hear from us, and we ended up enjoying ourselves writing it.  We had a great time and I know our fans are going to be excited about this, because this record is our best so far.

Are there any lyrical things standing out?
Just recently, we started writing vocals. I would just say a lot of our songs are just real; they are all from the heart. It’s been kind of a struggle in the group lately, so we’ve been writing a lot about struggle and how this band is just everything to us. We’re fighting to keep the ball going, and we’re fighting to win over as many people as we can.  We just released a record that blew up; every single person that heard it loved it. It did well, and it’s doing just as good as our first record, but it hasn’t really made a huge dent in our career. Our sophomore and our freshman record pretty much stand neck-and-neck. That’s cool, but we were really hoping that it did better. The whole goal is just to be climbing a ladder in this career.  You want to see yourself grow.

I’m not saying I’m disappointed, but I’m really hoping to see this next record grow, because every single one of us have been fighting for it and have been working hard. Our second record will have been out for about eleven months by the time this new CD comes out, so it’s a pretty short record cycle.  A lot of bands usually tour on their records for about a year and a half and then come out with their second record or third record.  We busted our asses to make sure we can keep kids hearing some new ISS.

When you struggle then, it is just career struggle or is there anything else you guys are addressing?
It’s stressful, for sure. We were told that we were going in to do a new record pretty fast. We were like “Crap, well, we just wrote an entire record.”  It’s tough. It’s not easy to write music.  When you have the time to, you can spend months and months and months letting songs marinate in your head, so you can pick out the things you don’t like and keep the things you do like. When you’re on a short schedule like this, you don’t really have time to let it marinate.

I think in a weird way that it has worked in our favor because it has given us a lot a time to not overthink it. Everything has just naturally worked out, and it’s been incredible how things have worked out.  Every single person in this band has been busting their ass writing songs, naturally, because we really enjoy to. We were writing songs before we were even told that we had to release a new record.

I’m really stoked to be done, so I can listen to it and appreciate it.  That’s the best part – watching these songs come together and just be able to sit around, put on some headphones and listen to it and be like, “This took an entire year of my life writing this thing.”  It’s the best.