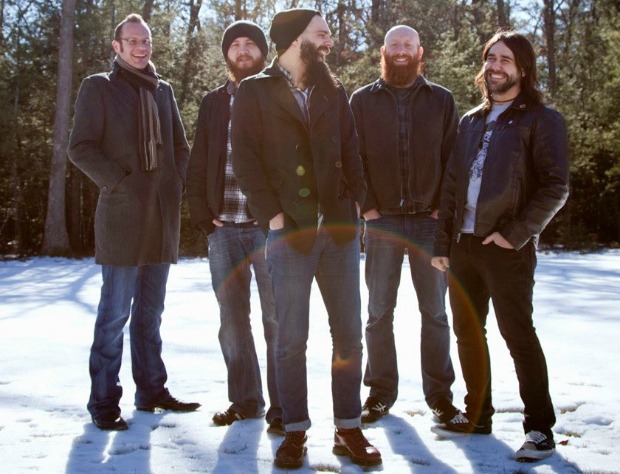 After a few years of uncertainty with former vocalist Howard Jones, Killswitch Engage have put their foot back on the gas pedal, gearing up for a new record and hitting the road again as part of the Tress Pass America festival alongside Five Finger Death Punch, Trivium, Emmure and more. AP caught up with Adam Dutkiewicz to get the inside scoop on their new record’s thrash sound, the return of Jesse Leach and keeping true to their DIY nature.

Killswitch are putting together your new record right now, too. How far along are you?
We’ve done basics for 16 songs, and we’ve got some vocal ideas down for two of them. When we get back in September, we’ll put the finishing touches on the other 14. The two are just about completed. One of them actually leaked already somehow. Somebody at the record company who is an absolute idiot did it. The only bummer about it was the fact that it’s just not done. It would have been nice to have something a little more complete leak.

The song that leaked, “No End In Sight,” you’ve been playing on the tour. With the song in a non-final form, how is it working out as the “return of Jesse Leach” song?
We’re working out the kinks since we’ve barely played it as a full group, so the more we play it, the tighter it will feel. Kids seem to be responding to it pretty well, and I think we’re playing in front of a lot of new faces this tour, so it’s kind of a cool reaction, anyway. A lot of people just not really knowing what to expect out of us. It’s pretty cool.

This entire record had been demoed out before Jesse Leach had rejoined the band, but Howard [Jones, ex-vocalist] had not touched any of it. What is happening with all of that material?
The way you always have to look at putting a record together: You do a bunch of songs, and normally some of them kind of float and some of them sink, and you want to kind of create the best record possible and then have a bunch of B-sides for a later release or exclusives [through certain retailers].

Being in a state of limbo between vocalists, how did crafting these songs go?
We all try to come up with ideas on our own and then bring them to the table. I’ll just kind of come up with a song idea in my head, then put it together within Pro Tools and show everybody. Then all the lyric ideas kind of come last, so being without a vocalist wasn’t too inhibiting of our process. We want to make sure everybody has a say even on songs that somebody completely writes from start to finish. At the end of the day, we’re a five-dude band, not one-dude band.