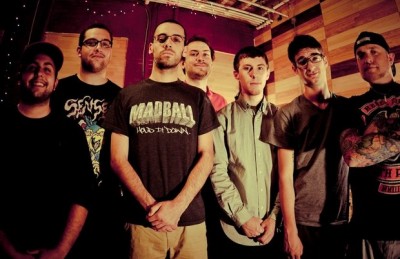 For the rest of June, Man Overboard will be holed up at manager Jesse Cannon’s studio, Cannon Found Soundation, recording their Rise Records full-length debut . The still-untitled album is due in September and is being co-produced by New Found Glory’s Steve Klein and Cannon himself. AP reached guitarist Wayne Wildrick earlier this week, the same day the band was finishing up drums.

I know it’s still early in the recording process, but what is everything sounding like?

The songs are a lot more picked-up; there’s some faster songs. We’re kind of going to work off of that, because we have to make everything work for those songs. If we have a slower song on the album, it can’t sound too different from the faster songs. The drums are sounding good, but…we really need to hear how everything sounds before we can decide what [the album is] ultimately going to sound like. There’s different-sounding songs on the album; it’s just a matter of finding common ground so they all flow together. But everything is more picked-up, and the songs are definitely a lot more aggressive.

What lead you guys in that direction? Anything in particular?

I don’t know! It’s kind of just what happens. We went to go write and demo some songs, and that’s just the way that it went. That’s how it’s always been for us. Some bands write faster records first and start to slow down, but I guess we did it the opposite. And it was a natural thing, too; it wasn’t something we sat down and said, “We want it to be fast.” That’s just kind of how it was.

Are there any sonic curveballs you’re forseeing?

That’ll come down the line. If a song calls for a certain part, then we’ll handle it as it comes. We have some cool amps that we’re playing with, some older amps with boutique heads and things like that. I’m sure that’ll have an effect on how it’s going to come out sonically. We’re trying some different snare drums out, different cymbals. Little things like that to make subtle changes [so] the songs sound the best that they can.

What are Jesse and Steve bringing to the recording process?

They’re outside perspective. We’ve been tracking and demoing [songs] for the last month, so when we came up here to play them, we still hear them only one way. They’re stepping in with outside ideas and making us hear the songs differently—which is good, it’s helping us change the songs and make them better.

Lyrically, are there any themes that you either want to address or themes that are coming up already?

Zac [Eisenstein, vocalist/guitarist] writes the lyrics for a lot of the songs— Nik [Bruzzese, bassist] wrote a song on the album, a song he had from awhile ago. Everything this band has ever played or sang about [is] always very relative to what’s going on at the time. If Zac’s going through something, he writes a song and then we play it. It’s that instantaneous. It’s just a reflection of what’s going on now, where everyone’s kind of at. It’s been a year, and a lot changes in a year. New relationships, old relationships, family things—just whatever is going on is definitely influencing it. It’s definitely a sign of the time where we’re at. I feel like it’s the same thing with the music; it all kind of reflects where we’re at as a band.

When you start doing a lot of touring, that causes so manychanges in ways you probably didn’t even expect.

Yeah, totally. The more you play out, you’re obviously going to play better as a band. When we went to sit down and start demoing everything, everyone just worked so well together. We all just know what to do, and when everyone’s had to do what. That’s definitely showing in this recording process.