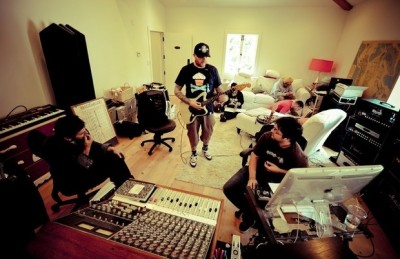 New Found Glory recently wrapped up Radiosurgery, their seventh full-length, which is due October 4 via Epitaph. For the album, the band turned to producer Neal Avron, who helmed three early NFG albums (2000's self-titled release, 2002's Sticks And Stones and 2004's Catalyst). A few weeks ago, while the band was in the thick of recording, AP caught up with guitarist Chad Gilbert. Part one of our interview is below; stay tuned to Altpress.com this weekend for part two.

How is it different recording with Neal Avron now that you guys have so much more experience?

Because we have so much experience now, I think there’s more debates. I guess we think we know what we’re talking about more than we did before. [Laughs.] Really, we respect Neal’s opinion, and that’s one of the reasons why we wanted him back. We hadn’t recorded with him since [2004’s] Catalyst—the last time we recorded with [him] was seven years ago. Since Neal, we’ve recorded with two different producers, and we’ve also done a lot of production ourselves on a lot of our own stuff. We really wanted him to take the reins this time, just push us. I hate to use a corny analogy, but [with] a sports team, people always credit their coaches because their coaches push them to be the best players they can be. It’s the same thing with music. If you don’t have another producer who’s pushing you… I can produce a New Found Glory record, and I’m sure it’ll sound great, and the songs will be catchy. But is it the really the best we could do?

When we wanted Neal to do the record, he didn’t fully agree to do the record right away.  Which I thought was really cool. He said, “Look, I know I can produce a record for New Found Glory and it’d be awesome, but I don’t really want to do it—I don’t want to agree to do it—until I know the album is there, until the songs are really there.” We were back on the [2010] Honda Civic Tour, and we wrote three songs and recorded them ourselves, and sent them to Neal. And Neal was like, “They’re okay, but I don’t really think they’re that great.” Then we sent him six others, and it’s kind of like the same thing, and it was really frustrating for us, because [we were like], “What the hell? These are like the best songs we’ve written! What the crap?” We were so bummed.

So we did another set of eight demos after arguing and going back and forth with Neal. The next thing you know, we hate the first [ones] we sent him, and he was right, and we dumped those songs. There’s only one song that we’re recording for the album from the original demos we sent him. It was cool having him push us, because we sort of had a vision on this record, and he really wanted to get that out of us. All the songs that made the record….two of the songs we wrote [in early May], but all the others we’ve had for a long time. We’ve been living with these songs for a bit, so recording them has been rather easy. That’s what I’m trying to get at. [Laughs.]

So few bands have the luxury to be like, “Okay, we’re going to take our time and write.” A lot of people are under so much pressure just to go in and get something out. Having the time to be like, ‘Yeah, these aren’t good enough, you guys can do better.” That’s awesome.

Especially for a band like us, who’s been around for awhile, we need that. I really love releasing records, because everyone doesn’t know what to expect. It’s always New Found Glory, because I feel like with Jordan [Pundik]’s voice, there’s no getting away from that, Jordan is Jordan. We can make him sound better on some records or sing better or different, whatever—maybe more aggressive one album. But what’s really cool about our band is, because of that, we have more musical freedom, to grow and change each album.

How would you describe this record, then?

A lot of people reference us as sort of a classic band, for the pop-punk style. But at the same time, we’re still young and we’re still relevant. I feel we wanted to take the reins for this genre of music and run with it. What I mean is—I only listened to the Ramones, old Lookout! Records stuff, Green Day Dookie, Descendents and that’s pretty much it. For a good six months. Those are all bands that I loved when I was younger, and I listened to them when I was a kid, but I sort of lost sight [of them]; I haven’t listened to those bands since I was a teenager. So I went back and rediscovered a lot of my old favorite punk bands and tried to incorporate what I loved about that music—which was, it was simple, it was fun, it was heartfelt, but it also kind of had an attitude. The Descendents have some aggressive songs, but they’re still love songs.

I feel like, my goal is to combine what punk is missing now, in my opinion. A lot of the newer bands, there’s a lot of things that sound very similar. My goal is to try to make one of those classic records again, where no matter what style of music you listen to, you can put it on, sing along, have fun and also get something out of it. It’s a step forward for our band, definitely [in terms of] songwriting. But it’s also—when you hear it, it’s more… I don’t know how to explain it. It’s really exciting, though, because there’s really no bands that have been playing this style that I’m talking about. I remember the first time I heard “Salvation” by Rancid. [sings the chorus] It just gave me that feeling, where it was just like, “This is fucking awesome”—and you don’t know why.

Those bands came out when I was in junior high and high school. There was so much sincerity and authenticity about it. It wasn’t calculated; it was really natural to them.

Yeah, exactly. It’s really hard to explain a sound and a new whatever, but I really feel that’s what it is. I feel like we’re trying to bridge the gap. I really want to bridge the gap between generations, where someone can listen to the new New Found Glory and be like, ‘Dude that’s totally Ramones,’ but it’s not the Ramones, it’s New Found Glory. Or like, ‘Dude, that totally reminds me of when I heard Dookie for the first time, or Kerplunk—but it’s totally not, it’s New Found Glory.' That’s sort of the goal.

There’s so many great new young bands. We’re taking out tons of new bands, younger bands in the fall. And I’m not dissing all of that. I [just] want to [release] that kind of record again. I feel like there hasn’t been one in a bit, and we all wanted to push ourselves to just release [one]. As a band, I love Not Without A Fight, I love Coming Home, I love all of our albums, but this is our life. It has to be good, because if it’s not good, we can’t continue. So we have way more at stake than a lot of other bands. So that’s why I really feel with this album, we’re very confident about it, because we put everything into it.

Come back to altpress.com this weekend for part two!