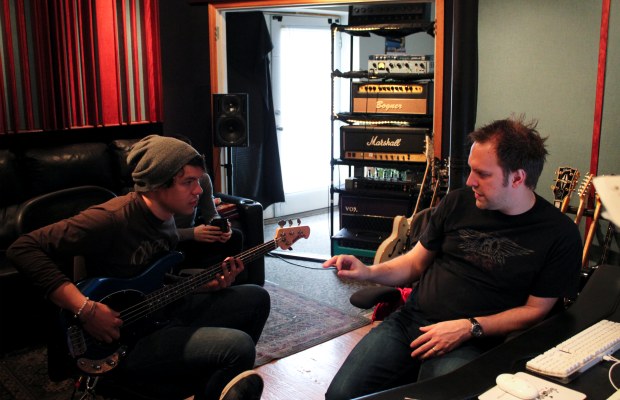 After several stints on Warped Tour and the re-release of their Horrible Kids EP, Set It Off are currently finishing up their debut full-length for Equal Vision in Alpharetta, Georgia, with pop-punk masterminds Zack Odom and Kenneth Mount. AP had the chance to chat with frontman Cody Carson about the heavier sounds they’re coming up with, anxiety attacks in a movie theater and balancing the selfishness of musicianship with the selflessness of relating to your fans.

You guys chose to record with Zack Odom and Kenneth Mount this time around. What was behind this decision?
Honestly, we were huge fans of past albums they’ve [worked on], such as [Mayday Parade’s] A Lesson In Romantics and Cartel’s Chroma. Their discography is [focused on] more of a poppy sound and the tones that they would get on those albums we thought were incredible. They never seemed like they did a band that was as heavy as our new stuff, so we got really excited about the concept of, “What if they had those tones with our sound?”

How is the relationship going? How is working with them on a musical level?
It’s incredible. The chemistry is amazing. When we got there, we immediately clicked, like we’re good friends. Then, as far as working together on songs goes, it’s like they know exactly what we’re going for. What’s important to us is making sure that on every song, you can feel 100 percent of exactly what we mean. They’re really good at helping us cultivate that in the songs, so I’m really excited about that.

How many songs did you bring into the studio?
We came into the studio with 18 full songs and about 6 or 7 song concepts. At first, we thought we were just doing 10 songs—that was the goal. Then we did and we’re like, “Damnit, there’s one more song that we want to have on this album.” So we asked [our label] and [because Equal Vision Records] is amazing, we are going to be releasing 11 songs. It was quite the process narrowing down those songs; they’re like our children.

Yeah, that can be a really daunting process. How did the narrowing process go when you have that many songs on your plate?
Each person loves each song for a different reason. Maybe there’s a story in the song that’s really close to their heart, or maybe there’s a part that they can’t wait to play live. When we got there, Zack [Odom] and Kenneth [Mount] would sit down with us and listen to all the songs with us. If there was a song where they were like, “Okay, this is good, but what if this chorus was different?” then Dan and I would immediately go into a live room with a guitar, and we would just write a new chorus right away and bring it back in there.

After we would do that, we would have to go back and listen to the songs. We made a list, and we had to figure out which song is serving which purpose on the album. Do we have a song that’ll take people on an emotional ride? Do we have a song that’s really energetic and in-your-face? One thing that’s really important about a full-length, that not everyone pays attention to while they’re in the studio, is diversity. A lot of people will release an album and have every song sound like, “Yes, that’s their band,” but they don’t necessarily have songs that take you on a whole ride. That’s what we’re really focusing on. If people are going to buy our album, we want to make sure that people are going to feel like they’re hearing an entire story or sitting down for a movie.

Since you guys are pretty far in the recording process—how is everything sounding? What are you most excited about?
[Last week], I finished lead vocals. Right now, all we have left to do is lead guitars and harmonies. Strings are pretty much done—that’s what we were doing [the week before last]. I was writing a lot of strings and whatnot and putting it on top of the songs. Every night, they leave the studio unlocked for us, and we’re so excited that we’ll just go in there and listen to what we have so far.  We were very proud of Horrible Kids, but this album is just a different level, and we’re very, very excited about it. I just want to release it now, but we can’t.

You had noted earlier that the new stuff is heavier. In what specific way?
I should be careful when wording that. It’s not that we’re a metal band now, or “screamo,” but what is true to us is that if you heard our old songs, there was a bit of heaviness to that. What’s really present on this album… we’re very theatrical when we present our story. If it’s a darker subject, there is a lot of angst and neurosis that goes into that song— and that, I feel, could be translated as heavier because of the fact it’s not necessarily the same sounding. In fact, in one song, Zach and Ken think I sound like the Joker from The Dark Knight. Not that I’m going for that, I just really try to get into character for each song as far as the mood goes. It has that diversity, but it still sounds like Set It Off.

Yeah, that type of diversity is good for a band. What are you trying to do this time around—sonically—to not repeat yourself? Where are you headed in your overall sound to keep it fresh for yourself and the fans?
When I was younger, growing up listening to Fall Out Boy, I would totally think that they planned it out like, “Okay, next album we’re going to do this.” With this album, it showed me that it just happens. I didn’t try to write anything different with this album; I just wrote what means a lot to me, and it starts naturally changing.

As far as differences from Horrible Kids, string-wise—that defines what we are. We have a classical background and we like adding that theatricality to the songs, but with this album, if you took away the strings, they’re still good songs. We add the strings in to give a whole different vibe to it. I think that’s one thing I really like about this album. The strings are necessary, but if you took them away for an acoustic show, you’d still get the full enjoyment out of that song.

How are you approaching lyrics and the themes of this record? What are you trying to cover this time around?
Basically, what’s really important to me is that I never want to write a song I don’t really believe in. There’ll be songs where someone will do a co-write and the song means nothing to them. What’s important to me is that, if I was younger or whatever age, I want to be able to reach anybody that’s been in the situation.

An example is like an anxiety attack. When I was growing up, I had a really terrible anxiety attack in a movie theater. I remember I was sitting in a chair in the movie theater and I thought—for no reason at all—that one of my family members was hurt. I got up and started walking down the stairs to exit the movie theater, I got tunnel vision and my skin turned cold. I ran outside and I fell on the ground and I screamed for help. I’ll never forget that in my entire life. As I went on through life, I realized I wasn’t alone for having a moment like that. Anxiety attacks are super-common. It’s unfortunate, but it’s actually completely normal, so I wrote a song to reach out to people who have been through that.

Every now and then I’ll tweet, “What are you going through right now? What is the toughest thing you’ve had to deal with?” and I really got a lot of feedback on that, so I was like, “Okay, how can I tie this into the things I’ve been through?” People go through rough patches and have shitty days. We wanted to have music that will cheer you up and give you hope at putting you through some real situations.

That’s a noble cause to fight for, and it’s really cool you take the time to send a tweet and shape yourself around that to help yourself relate to your fans.
I think it’s really cool. What really means a lot to us is that every now and then we’ll get a Tumblr “ask” or something that’s like, “Thank you guys, because I was considering suicide and now I’m okay.” Those kinds of messages are the reason why I keep pushing for that cause.

There’s nothing better you can do as a musician than bridge that gap between the selfishness of art and the selflessness of being there for and relating to your fans–wanting to be there for the people who listen to your music.
Yeah, I’ll write songs to help someone out, but I’ll never go, “Oh, here’s all the terrible things about it.” I’ll always have that aspect of the song that cheers you up and the songs are extremely upbeat. What’s also is important is that I don’t want people to think this album is some depressing album—by no means is it. And this album is going to be so fun to play live. alt