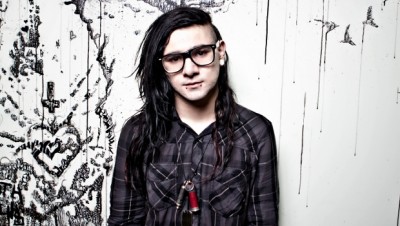 It’s a vast understatement to say that DJ/producer phenom Skrillex—who you might also know as Sonny Moore of From First To Last—is busy. For starters, he’s founded his own label, which he’s dubbed Owsla after “the elite rabbit army that basically beat the crap out of all the other rabbits” in the book Watership Down. “It’s going to be a lot of electronic music, and I’m signing some hip-hop as well,” Skrillex says. “The first release will be a kid named Porter Robinson, who’s eighteen years old and an absolute genius right now producing electro, house and bass music, all types of BPMs.” He’s also maintaining a rigorous global touring schedule; name a festival, and he’s probably made an appearance. In between gigs, Skrillex has been working on his debut full-length album, which is due this fall. When AP reached the musician in Seattle in early June, a few days after the Sasquatch! Festival, he seemed fully recovered from the late-April laptop theft that derailed his recording process; in fact, he was enjoying a rare day off. “It’s nice to kind of kick it in the city and walk around and not think about anything else,” he says.

You’ve been recording this new album pretty much anywhere and everywhere.  So where exactly have you been doing stuff?  Give me the rundown.
Um. [calls to someone in the background] How many countries have we been to in the last…? [someone answers] [We’ve been] recording in about twelve, fourteen different countries since January in airplanes and hotels and other people’s recording studios and bedrooms and living rooms and closets and trains and planes.

How has that affected the music?  What have you picked up from all of these places?  Obviously, each country and each environment has different vibes.
It’s more like… you’re traveling around and walking into Fabric for the first time in London, which is a world-renowned, famous club. [You’re] walking into a place like that and going home immediately and writing a track—or being in Amsterdam at some nightclub, or being in Italy… We went to some Italian free-form jazz places; you get inspired all over the world by all these different sounds. It really does come out.

What is the album sounding like then?  Are you going for cohesion?  Are you going for disparate sounds? What are you kind of aiming for at this point?
I never try to aim for anything consciously; I just make what I make when I feel it.  But, I’m kind of doing what I’ve always been doing, which is different styles of music. The more I grow as a producer, the more it just shows naturally.  So I got the 140-bpm stuff…the typical Skrillex banger stuff, and then I got some hip-hop, some dancehall, sort of bass shit, like, all over the place, man.  So it’s pretty cool.

Is there anything new in particular that you’re really inspired by?
I have this tune that’s been kind of leaked from a radio show. It’s going to be named something different, but it’s called “Roughneck Bass,” and it has a very dancehall vibe. People are really digging that one.  So I’ve been taking a lot of dancehall influences as well, and the moombahton stuff that’s coming out. This guy Dave Nada, he invented it; [it’s] this totally new style of music that takes reggaeton and Dutch house and even some dubstep as well.  So that’s pretty cool, I’ve been listening to a lot of that and making some of that as well.

Can fans expect any collaborations on the album?
Yeah, some cool collaborations.  I can’t say most of them yet.  I have some with Diplo that I did and some other hip-hop artists and singers.  Kind of like the stuff [I’ve always been] doing.  Some vocalists.  And I did do some stuff with Pendulum as well, which is going to be sick.

I saw that you were recording in Pendulum’s studio, right?
Yeah, I had my own room in there. And then obviously being around each other—because they were working as well. Then we got together one night and just jammed, which is awesome.

How do you think you’ve improved as a producer and composer on this new record?
I don’t know.  Just trial and error.  The thing about music and art is, like, you can feel like you’re done with something, and then by the time that it gets released a month later, you can be like, “Oh, I would’ve done that differently.” That part of growth is knowing that you always can do something differently and applying that next time.

[At this point in the interview, Skrillex is stopped on the street by fans who had just seen him perform over the weekend. He takes the time out to greet them warmly.]

Is that pretty standard?  Do you get recognized a lot more now?
It happens from time to time, depending on where I am.

Are there any curveballs that fans can expect on the record?
I don’t really know. I have all types of music that I like to make. I do what I do,  and it’s always going to be more of a updated, upgraded version of what I’ve done before.  So, nothing too curveball-y, I’m not going to all of a sudden make a bluegrass record. Maybe one day.

When you get older, that’s what people tend to do, right?
Yeah, I mean I’d call it something else.  I wouldn’t call it Skrillex—or maybe I would. I don’t know.  Either way, I’m kind of doing what I’m doing now and not trying to think about it.

Do you envision any changes in your live show? Do you have anything you want to add, especially after this record comes out?
We’re bringing out a lot of cool custom lights and stuff for the summer run and then in the fall even more elaborate image-mapping and some crazy stuff that’s actually never been done live before that I can’t even say yet.