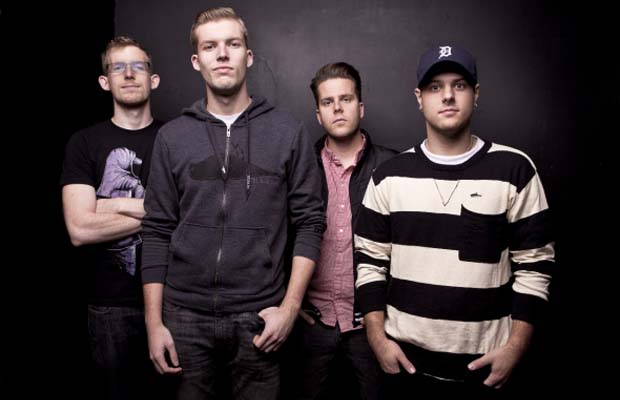 EXPECT IT: Mid-summer via Fueled By Ramen

To record their second album for Fueled By Ramen, the Swellers decamped to the Blasting Room in Fort Collins, Colorado, to work with producer Bill Stevenson. To say that vocalist/guitarist Nick Diener is thrilled about this would be a vast understatement—after all, the Swellers are huge fans of Stevenson’s influential pop-punk band, Descendents.

“We play poppy punk-rock music, and the Descendents pretty much invented that,” Diener tells AP while enjoying unseasonably warm Colorado weather during a studio break. “And they pretty much invented how we tour—get in the van, load up your stuff, get to the next show, play as hard as you can, sweat, don’t care about anything else except for the fact that you’re there to play, no matter how many people are there watching you. [Stevenson] was really happy to be working with us, because he sees how hard we work, he sees that we’re real.”

Diener says that working with Stevenson has also helped him become a better singer. Specifically, he’s benefited from the veteran’s tips on how to capture the energy and vibe of singing live, even while in the studio. That dovetails neatly with the Swellers’ goal for their still-untitled album. “One thing that a lot of people told us about [2009’s Ups And Downsizing] was that we come across way better live than we do on recording,” Diener says. “So we’re trying to capture some of that live aspect on this record, with a [few] more raw guitar tones [that are] maybe not as polished, but still sound like the best record we’ve ever made.”

Another member of the Blasting Room’s in-house staff, engineer/producer Jason Livermore, is tracking all the guitars on the album. Diener also gives him high praise. “He shares the same love of really huge, mid-’90s grungy guitar tones,” he says. “We’re starting to bring that back on our record, because it’s something we’ve always wanted to mess around with, but never had any time to experiment with.

“We [have] some really crushing guitar sounds on this record—they’re kind of known as Blasting Room guitars. Every record they do has some really awesome sounds,” he continues. “We’re definitely adding some crazy stuff to the mix.”

Lyrically, the Swellers are exploring some heavy stuff this time around. The album contains a song inspired by a serial killer who recently terrorized the band’s hometown of Flint, Michigan “pretty much in my backyard,” Diener says. “Not exaggerating—you know, 10 blocks away they found a body.” The lyrics focus on the impact the killings had on a friend of his who worked at the Flint hospital and had to deal with the somber aftermath “and how it took a toll on his nerves, [with him] wondering, ‘Do I really want to live here in this horrible place?’”

Despite “morbid stuff” like that song, however, Diener feels that this is the most “positive-sounding” album the Swellers have ever done. “There’s a new optimistic feeling to this record,” he says. “There’s a lot about growing up and just trying to hold on to what you used to have. We’re at that age right now where our friends are settling down, having kids, getting married. Meanwhile, we’re just kids in our 20s playing punk rock and seeing the world and trying to hold on to that carefree feeling, even though it’s getting harder and harder.”

Understandably, Diener notes that a lot of the album turned out “pretty introverted.” Still, it’s not always going to be obvious in the lyrics what the band’s referring to, as there’s been a conscious effort to keep things open-ended. “With this record, we’re just going to leave it for fans to decide what they think about the lyrics and the message,” he says. “With the last record, we came out and said, ‘This is what it’s about, this is what’s going on, this is what this lyric means,’ but I almost feel like now we don’t need to explain ourselves and the metaphors, because that’s kind of what art is – it is what it is, take it or leave it.”

In the end, Diener views this album as a logical progression from the Swellers’ past work. “I feel like we’re better at writing songs and we’re better at playing our instruments, so everything is just going to sound better,” he says. “We’re working in the best studio we’ve ever worked with and the best producers we’ve ever worked with—so everything so far is the best we’ve ever done. It’s a really good feeling to know that in our lives, this is going to be a huge milestone, making this record.

“Our goal is just to make timeless music that we’re going to still enjoy 10, 20 years from now,” he adds, “instead of riding the coattails of some cool new dubstep phase or something. We’re still doing our thing and having a blast.”