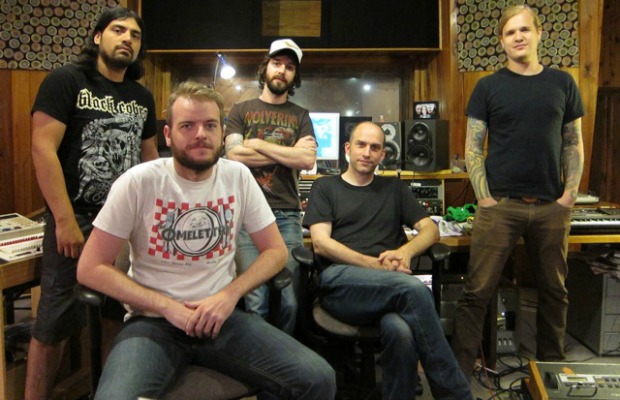 THE SWORD have spent their near-decade as a band carving out a scene heavily influenced by classic acts like Black Sabbath and Led Zeppelin, duly titled “retro metal.” While critics have been busy fumbling over what shelf to place them on, the band have self-produced two records, released a rock opera and toured their asses off with the likes of Red Fang and Metallica. Now the band are wrapping up their fourth album, Apocryphon, with J. Robbins (mewithoutYou, Against Me!) and AP caught up with guitarist KYLE SHUTT to chat about analog recording, comic books and the band’s busy future.

Where are you at and what’s going on with the record right now?
KYLE SHUTT: I’m at Magpie [Studios in Baltimore] right now. Today is the last day of tracking, so I’m very excited to wrap this one up. I think we’re going to stay here to continue mixing for at least the first couple of days. We want to help [create the foundation] of how we want the [album] to sound, then pack it up and go home. We’ve been here for five weeks now, so I can’t wait to go.

Days in the studio can be quite rigorous, so five weeks of long days can crush your spirits a little bit.
Yeah, we were doing 10-12 hour days, six days a week, so it’s been tough, but awesome. I think the record sounds great, and I can’t wait to have it mastered and ready for people to hear.

After self-producing two records and then working with Matt Bayles, why did you go with J. Robbins this time around?
We’re all huge Clutch fans, and we know those guys real well. [James] did two of their last three records, and those sound great, so we figured it was a no-brainer. We called him up and he was into it. He saw our live show at a club in Baltimore on the tour before we came here so he could get a feel of the kind of show we put on because we wanted to make an album that sounds like we do live in a club. And it was great. It was a real speedy process.

What did James bring to the table during the recording process for your sound?
Every guy’s got his own way to capture music, and we love the way those Clutch records sound—they really do sound like that live. We knew he could capture a more energetic sound, which we wanted. Warped Riders was clinically perfect. Matt Bayles is that kind of [producer]. He’ll go over every last detail on each song. This time around, we wanted something where it’s okay to be slightly out of tune. It gives it that extra little bit of character, you know? We wanted to make a difficult record this time around and continue to explore ourselves.

There was a picture posted of some reel-to-reel recording going on. How much of the record did you guys do analog?
We recorded live takes to two-inch tape and then kept only the bass and drums. Then we dubbed [the two-inch recordings] into pro-tools and added all the guitars and vocals. Finally, we moved all of that to half inch, so the entire recording will be mastered from half inch.

Your past records landed somewhere between doom metal and stoner rock, so where do you find this record falling stylistically?
It is a reflection of everything that we [have gone] through and the lessons we learned. We then deal with these situations metaphorically in our lyrics. This record is just 10 banging hard rockers. There’s no real “stick out” thrash song, or, like, this one is the ballad. I don’t think there’s going to be any instrumental songs on this record, either, so that’ll be a first for us. It’s just 10 kick-ass rock songs.

So the title of this record is Apocryphon, which means something along the lines of “secret teachings.”
J.D. [Cronise, vocals/guitar] came up with that. The title actually came before this record was complete and even before some of the songs had names, which is different because usually the album title is the last thing we come up with. It’s just any kind of hidden book that would hold knowledge that maybe shouldn’t be known. I’d hate to sound cheesy, but it’s just a metaphorical way to sound serious.

Your previous album, Warp Riders, was, for lack of a better term, a rock opera focused on a sci-fi narrative. Where does this one land lyrically?
There are lyrical themes that weave in and out of the songs, but there’s no story or anything like that. With Warp Riders, J.D. had already written [the story] and now he [doesn’t] have the time to sit down and write another book. We had the idea to make a comic book for Warp Riders, but we had some really poor management at the time, so nothing really came together with that and it was going to cost so much money that it never saw the light of day. It was just a nice thing we did. Now we’re moving on to other things.

Speaking of comics, the cover of Apocryphon is done by J.H. Williams III (Batwoman, Promethea). What’s the story there?
J.D. was real into the comics that James was doing and we all thought the art was great because the guy would do crazy shit like multiple styles within one panel. He makes really unique art, so we just had our people call his people, and it turned out he was a fan and was honored to do the artwork and we were honored to have him do the artwork.

What do you want people to know about where the Sword are headed with this record?
We’re hitting the road for at least two years on this one. We’re on a brand new label, so we’re very excited to have someone behind our recordings again and ready to support us, so we can get out there and tour. I know we’re doing the States the last part of this year doing Europe, Australia and Japan in February and March, so we’ll be busy for a while.