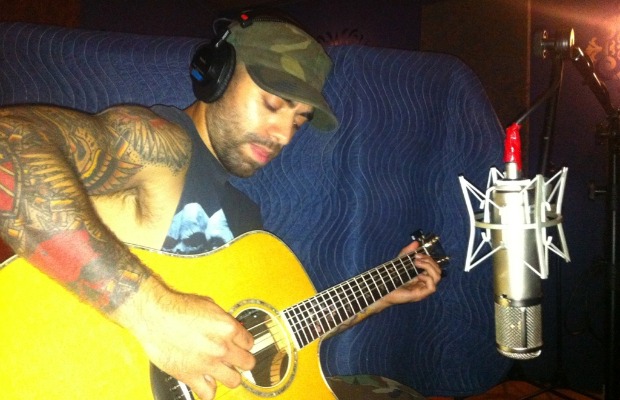 A year after Rise Records released their third studio album, The Weight Of The World, Long Island hardcore band THIS IS HELL are at it again. Their still-untitled fourth studio album features a new line-up: Bassist Pieter Vandenberg and drummer Mike “Scuzz” Sciulara are taking over for Andrew Jones and Benny Mead. According to founding member/guitarist Rick Jimenez, the pair have fostered a “back-to-our-influences” mentality in the studio. “Both dudes came at a great time and really kept this band going,” he said in a recent statement. “Recording the new record, especially with the shift towards thrash, has been really perfect with these two dudes.” Jimenez sat down with AP and gave fans a sneak peek into what’s driving the new album, which the band recorded in less than two weeks with producer Tomas Costanza.

When compared to The Weight Of The World, what’s been different about this recording process?
We have two new members in the band, so that’s always going to change everything. Last time, we also had time to sit and practice a lot and then we went right into the studio. This time, everybody knew everything. We did a little bit of practicing, did a tour in Canada with Shai Hulud and the Naysayer, came back to the States and did almost two weeks [on tour] by ourselves, and then took 11 days in the studio. We [have] never done that before, but it was cool. We got to play a bunch of the new songs live on the way out here.

How are people reacting to the new songs?
Very well, surprisingly. The new stuff is pretty different. It’s always hard to estimate how people are going to react to new stuff, let alone if it’s different.

What dynamic has producer Tomas Costanza brought to this record?
He really, really knows his shit and knows what we want to accomplish, and he’s also very diverse. He usually does pop artists—obviously, we’re the furthest thing away in the world from pop. But he knows what we’re going for, and he knows how to accomplish it. He knows when to offer a suggestion on something, not as far as songwriting, but when we’re recording. He also knows when to step back, because it’s not like we need a songwriter or someone to tell us how our songs should be. He cares about the band, he cares about what we’re doing and he cares about how it sounds.

What are the differences in the new stuff?
It’s very metal. The way the last record [happened, we] just started writing and [said], “Hey, this is what we’re writing.” This record was the same. We started writing, and it just got more and more and more metal. That’s what I grew up listening to, and that’s what I grew up playing on guitar; I learned how to play guitar essentially by playing Kill ’Em All by Metallica. We never put any limits on what we can and can’t do. It’s cool, because if you put limits on yourself, especially as a hardcore band, it defeats the entire purpose of doing music.

What are the specific metal influences coming out on this album?
Mid-to-late-’80s thrash. I got into punk, and I got into hardcore so much that [it] took over my entire life. You go back to what you first got into, and it’s almost like rediscovering things. That was a big deal, rediscovering my love for certain bands. [To be] like, “Oh, I can let this influence show a little more.” This record just kind of snowballed that: Metallica, Megadeth, Slayer, Anthrax, Testament—all that stuff is always finding it’s way in. Of course, it’s all rooted in a This Is Hell filter, so obviously it sounds like [us].

I’ve noticed on your Twitter you keep mentioning how excited you are about this record. What stands out the most to you about it?
It’s so hard to say, because to me, everything about this is so much bigger and better than anything that we’ve done. Musically, we’re all at the best that we’ve been so far as a band. It just seems like a really cool progression for us. Doing the same shit over and over again, not even just at music, but also at life—that gets boring. While music is our life, music is our livelihood also. It’s cool we get to keep it fresh and keep it fun. If I don’t think that what I did last is the best thing that has happened yet, I would be so bummed. This is by far our best record. I think it sounds better than anything that we’ve ever done by far.

Are there any big surprises on this record that people should be aware of?
There are definitely things that people are not going to expect. I don’t want to ruin it [by mentioning them]. I don’t think it’s going to be things that people listen to and they’re going to be like, “Holy shit. What the fuck? This is messed up.” I think they’re going to be like, “Wow, that’s pretty fucking sick. I didn’t think they would do something like that” or “I didn’t think they were capable of that.” When we play these new songs, [people are] like, “The thing where you did this, that’s really fucking cool. I’m glad you guys are going in that direction.” That’s so gratifying.

What lyrical themes are coming out on the album?
Lyrically, it touches a lot on injustices. I think this is the most socially conscious record that I’ve ever written. It’s not an Anti-Flag record. It’s not, like, into politics and making sure everybody hates George Bush and shit like that, but [it’s] paying attention to social issues as opposed to, “I’m depressed. I’m going to write a song about it” [or] “Oh, I fucking hate this person, I got to write a song about him.” That will always be there; that’s part of the way that I write lyrics.

It’s a bit more topical. We talk about themes of racism across the board; we talk about the theme of homophobia. We touch on themes of caste systems—in our day and age, caste systems shouldn’t exist. Whether or not we acknowledge it, it exists. I see it everyday, especially where I’m from and where I live. On a more personal level, [we touch on] the way our economy is so bad that everyone is getting fucked. Most of it is done through a personal filter. Because if you’re not writing personally, how much passion can you really have behind something?