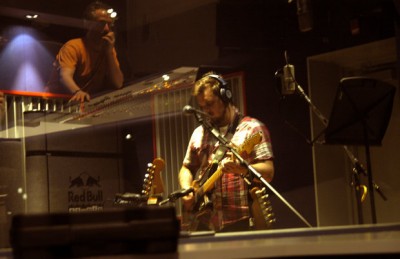 Thrice recently finished their seventh studio album, which they recorded at Red Bull Studios with Dave Schiffman, the man who engineered 2005's Vheissu and mixed 2009's Beggars. The full-length, which is still untitled, should be out in late September via Vagrant. AP caught up with vocalist/guitarist Dustin Kensrue the day before he added final vocal touches, as he was out enjoying beautiful California weather with his family.

What are your impressions now that the record is almost done?

[It’s] not too different than before. It sounds kind of bigger and meaner than the demos. I don’t know. It’s hard to describe without giving a bad or an inaccurate view of it. I can say that Dave Schiffman, the guy who’s kind of engineering and producing, heard the demos and he’s like, “Oh, so you guys are making a grunge record.” Which was definitely not our intention, and I think it’s definitely a hyperbole, but it definitely has some elements of underground ‘90s grunge—like chord turns and some of that dirtiness. Other than that, it’s hard to say. It’s definitely the most natural progression from record to record that we’ve had in a while. We did The Alchemy Index, which was totally different [from Vheissu]. Then Beggars was kind of the reaction against that. This kind of makes sense coming out of Beggars, but it’s definitely a different record.

Is there any particular thing that lead you guys there?

It’s got the same kind of groove and energy that Beggars does, but generally it’s going to be different in some of the moods. And also the sound of the record is just going to be bigger. We went really stripped-down on Beggars, even in the production and everything; we tried not to make it larger-than-life to kind of give it this very down-to-earth feel. Most records these days are smashed and oversaturated, and so this record is not that, either. But it’s definitely going to be a little bit bigger and in-your-face than Beggars was.

What did Dave Schiffman bring to the process this time?

He wasn’t overly involved in a producer-type role. We had him come down to our practice space when all the songs were kind of being played and [he] just kind of listened through and talked about them and made a couple changes based on little things said here or there, but it was really minimal in that regard. He was mostly just bringing his experience as an engineer and mixer, just knowing how to get the sounds nailed down. We’re really comfortable with him.

Especially since you guys are such a veteran band and have done so much recording, it’s like, [when you have] a producer, you wonder what role they can play.

Yeah, it just depends. At the stage in this record when we decided to pull him in, it was later than you would want to bring someone in that was going to totally have a huge input into it. Just as a friend, he’s someone that we trust his opinion, but he’s also appreciative of what we’re doing and [gets] what we’re doing. So yeah, it worked out really well.

Lyrically, what sorts of things are coming out then? Are there any themes?

I’ve always dwelled on issues of mortality from time to time, and things surrounding that. I think with just the stuff going on in the past few years [it’s] coming out again in this record some. Teppei [Teranishi]’s mom passed away, the brothers' [Breckenridge] dad passed away, my dad has brain cancer, so it’s just been really heavy, it’s been a heavy two years. So I think some of that is influencing it.  And then [there are] I think other issues coming into play…being kind of a family man. There’s this very aggressive song dealing with dads who are either, I guess, in general bad or abusive fathers, so that kind of hits close to my heart. I [also] wrote a song just dealing with kind of the state of marriage in our culture and our rights and views on it and the destruction that that brings.

Are there any lyrical or stylistic curveballs on the record?

I don’t know. I think it’s probably hard for us to see, being inside of it. More than a lot of bands, we just don’t keep tabs too much on what’s going on around us. I think what other people might think would be relevant, we just kind of don’t care. We just do our thing and make our music. So I think sometimes it’s hard for us to see how stuff’s actually relating to things outside of us. A lot of the music we listen to is probably not in the vein of where people would lump our band, but I think a lot of that has to do with us being lumped in with stuff from things we did eight or nine years ago.  … I don’t know, I feel like part of [the new album is] catchy in more of a Nirvana-esque way of, it’s dark but there’s good hooks in there.

I’m really proud of the record. I’d probably say that for anything we’ve done, but I guess that’s just because of the approach of the record. We’ve been pushing ourselves really hard, and I like to think we’re probably our own toughest critics.