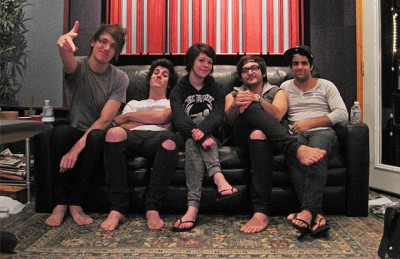 We Are The In Crowd have been working on their full-length debut in Atlanta with producers Zack Odom and Kenneth Mount since early May, save for a brief break for a U.K. tour with Mayday Parade. “It has been the longest place we’ve stayed in consistently in, like, six months so it’s like home,” says vocalist Tay Jardine. Although the band recently announced they’re dropping off this summer’s Taking Back Sunday tour to finish the album—which is due via Hopeless Records this fall—things are going well. In fact, the album already has a name, although Jardine notes WATIC aren’t quite ready to reveal it yet. (Die-hard fans take note, however: “If anybody has been reading our tweets, they may get a little hint [of the album title] in there,” she says.) Jardine checked in from the studio last week, as she was finishing up some vocals. And don't forget: If you haven't watched WATIC's AP Sessions video, you can do that right here!

When you guys came into the studio, did you have things written already? Did you guys do any writing in the studio?
Both. The writing process was pretty difficult. We had been on the road since Warped Tour last year pretty much consistently, and the only time we had off was Christmas break, and we were all doing family stuff then.  Writing on the road is really difficult for us.  I know a lot of people can do that, but it’s a little harder for us, because we do it all together. So in January we took a few weeks off and got all of our ideas [together].  When we went to the studio, we had twenty-five ideas.  For about two weeks of pre-production in the studio, we just sat down and figured out which ones we wanted to focus on.

That’s a whole ton of songs to be dealing with.
The funny thing is, [when] we came into the studio, we forgot how much we had written; we thought we didn’t have anything.  We were like, “Oh my gosh, we don’t have any material”—and then we all took [the demos] we had on our computers and put them together and [there were] twenty-five or twenty-six songs.  We were like, “Well, this could be worse.  We could have nothing.”

Describe the studio setup.
The studio setup is actually really nice.  It’s the bottom level of a house, so the first story is the studio and our little apartment area. We’ve recorded other places before where the studio is in a totally different neighborhood, and you have to get a hotel room or something like that.  So it’s definitely really cool that we can have that.

It sounds a little bit homier.
Oh yeah, definitely. I guess it’s probably the closest thing to a college experience we’ve ever had, in the sense of a dorm room or something like that.

That can be good and bad—I know I had a lot of fun in college, and it didn’t necessarily always have to do with work.
[Laughs.] It’s definitely very work-oriented, though.

So what is the record sounding like?
[It has] a very similar sound as the [Guaranteed To Disagree] EP, but [because it’s] a full-length, we have room for more dynamics in the songs.  Before, we only had seven songs—and two of them were already released—so we really only had five songs on the last record that were brand new to us.  We were going out on Warped Tour, and we had to make them suited for a Warped Tour vibe.  [They were] very upbeat and stuff.  So on this record, there are more dynamics.  There will be songs from [a] pop-punk vibe to the slow ballad [vibe], so I’m really stoked on that.  We also dug a little bit more into our personal lives lyrically, which is kind of different for us, but I like it more that way.  It’s a little bit more intimate.

I would imagine a lot of bands would be hesitant to do that; it’s nerve-wracking.
Yeah, and we write everything together. I think the first time around, it was a little bit harder to express anything that was going on to each other.  So with touring so much as a band, and getting to know each other and feeling more comfortable with each other, it was actually pretty easy to do that.

What specific things are you guys talking about?
Other than the typical, “I’ve been in this relationship, and that one” and things like that, we also have some songs that are based off of…there’s one song in particular that’s based on other people’s perspective of you. We dug into that, because we went through a situation recently where we felt like people didn’t understand where we were coming from on this certain topic.  We expressed how we were feeling about that situation, because a lot of times when things like that happen, you can’t be very public about it, and you don’t want to make a scene over something that’s really not worth it.  But it’s cool to put it in a song; hopefully other people can relate to it.

You have to be so diplomatic about things that are sensitive.
Totally.

What’s it been like to work with Zack and Kenneth?  What have they brought to the album and your music this time?
We did the EP with them too, so we definitely have that very-comfortable vibe with them.  And they’re a lot like us; their sense of humor is exactly like ours, so it’s always a really fun time in the studio.  They’re great at what they do.  Our type of music is something that they’re really good at, so that definitely helps.  I don’t know if I could ever feel as comfortable with anybody else in a studio.  And that’s really important, too. I know for me, going into a vocal booth, [if you’re] showing them what you’ve got, and you’re uncomfortable, you can’t put your all into it.

You mentioned this record has a little bit more diversity. What are some of your favorite songs on the record?
It’s hard to say, because they’re not all completely finished, and until they’re all mixed and everything, I don’t know. But I am a little bit more excited about the slower ones right now, just because we haven’t done that before.

Is there anything that will surprise fans besides the slower songs?
Maybe not a surprise, but I think one of the differences in the full-length is the male/female perspective thing.  When the band started [originally], and we did the male/female thing, it wasn’t something that we tried [as a] gimmick or anything; it was just something we utilized because we had two singers.  And because there were male and female [voices], it became easier for us to do that, because naturally when we’re going to be writing lyrics, I’ll think of something the way I would see it and then maybe they would see it differently.  But in this one, I would say it’s a 50-50 [split] of perspective songs, and then songs that are just Jordan and I agreeing on the same topic.

What are you most proud of?
I’m definitely proud of the day we picked all the songs and put them on a list and looked at them.  We actually did ballots.  We put the ten songs that we wanted on a piece of paper and threw them in a box, and we tallied them all up. Everything we do is very democratic in that way.  And that was a really cool moment, because a majority of the songs that ended up on there we all picked.

Having you guys do things by committee, you’re lucky that you guys can agree on things so easily. That could turn into such a nightmare if you didn’t.
I mean, it’s not easy—and that was one of the reasons why our last EP was called Guaranteed To Disagree.  We will argue and scream at each other until something comes out of it that we’re all happy with.  We’ll argue until we’re happy. Having close friends in a band, and people you trust, you can do things like that.  It’s like fighting with your brother and sister.  You know you can yell at them—but you know that they’re going to try to see your perspective on it.