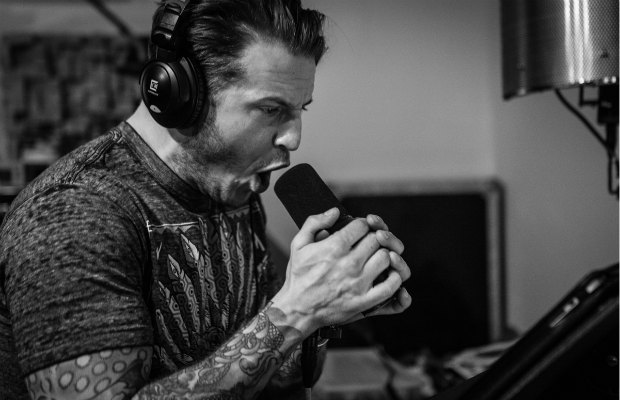 Atreyu climbed to the top of Metalcore Mountain a decade ago, alongside their friends and peers in the so-called New Wave Of American Heavy Metal. A trinity of albums on Victory Records brought Alex Varkatzas (vocals), Brandon Saller (drums/vocals), Dan Jacobs (guitar), Travis Miguel (guitar) and Marc McKnight (bass) the adoration of fans and the requisite clothing lines, accolades and festival billing that comes with it. At some point after they released a pair of albums on Hollywood Records (home to Breaking Benjamin, the Jonas Brothers, and Demi Lovato), Atreyu disappeared. Varkatzas mostly concentrated on fatherhood and his Hellenic CrossFit & Muay Thai business in Costa Mesa, California, while Saller stepped up as frontman in Hell Or Highwater. Last year, Atreyu returned with “So Others May Live” (a new song offered as a free download), local shows in Orange County and an appearance at Knotfest. Fresh from Australia's Soundwave festival, Varkatzas checked in with AltPress by phone to talk about burnout, revitalization, and Atreyu's as-yet-untitled sixth album, currently being mixed by Fred Archambault (Avenged Sevenfold, Eighteen Visions), set for release this fall through Search And Destroy/Spinefarm.

What was the state of mind within the band right before the hiatus?
ALEX VARKATZAS: For me, it was just total burnout. I'll speak just 100 percent for myself. It was complete burnout and I guess unhappiness with the direction we were going. It seemed like a redundant cycle. The fire was gone. We were just touring to tour, 'cause that's what we did. You know, if we weren't playing shows, it was like, “What do we do? What do we do?” We were always either touring or making another record.

There was a lot of international stuff—flying, traveling—on the last few tours. And that really took a mental toll on me, personally. It just kind of broke me, in the end. I was just over it. It started to affect our relationships as friends. We were all friends who started playing music together. So, it sucked. I've got to say that now, things are a lot better. I think all of the other dudes felt a similar way. We were all burned out.

It's not necessarily like we wanted to do other things. That's not why we took a break. But in taking a break, it gave us the time to do other things. I think we needed to do other things in order for us to love being in Atreyu again. Dan, Brandon and myself started playing music together when we were 12 and 13 years old. I don't know anybody who started their accounting job, or interviewing bands, when they were 12 years old.

It's crazy how many original members you have left compared to a lot of your peers.
Yeah! The three of us started in junior high. Technically, Travis is more or less an original member, too. He's the first second guitar player, I think, officially. He's been in the band for every real record. And the “new guy,” Mark, has been in the band for almost 10 years. [Laughs.] And I'm only 33. At times I feel old, but I'm not really that aged yet. I think we've got some fight left in us. Well, Travis is getting fucking old. [Laughs.]

Atreyu always mixed all out heaviness and melody. During the hiatus, Brandon went full on rock in Hell Or Highwater, while you went super-extreme with Bleeding Through's Brandan Schieppati as I Am War. How did that impact the new Atreyu album?
It helped us. It let us get shit out of our system. When we weren't on a major label, nobody told me what to do [creatively]. I did whatever the fuck I wanted. Then, the second we signed to a major label…I mean, I'm not trying to blame anybody. But people are calling you all of the time, sending emails all of the time, harassing you about song titles and singing and dumb shit and it just gets to be too much. It's annoying. There's a lot of dumb pressure. The I Am War thing was cool because there was none of that. I got to do whatever I wanted, Schieppati did whatever he wanted, and we met up and recorded.

I know Brandon had a lot of rock songs. He's a good songwriter. He's a talented dude. He had a lot of stuff he wanted to get out in that way that just wasn't appropriate for Atreyu. I think it worked out great for everybody, more or less. Having us come back together now—this feels like the missing link record. It feels like the record we would've made after A Death-Grip On Yesterday [2006]. In my mind, we're starting there.

Lead Sails Paper Anchor [2007] and Congregation Of The Damned [2009], you know, they happened. They're part of our career. I'm totally proud of some moments on those records. But I like the vibe of heavier, more aggressive type of music. We've definitely gotten back to that. You can hear it already in “So Others May Live.” That's not exactly trying to be commercially acceptable.

We just get to make music now. And as commercial and bullshit music has kind of fallen apart… I mean, there's two things going now, really. There's totally contrived crap like American Idol and then there are heavier bands that are able to make their mark and do things and get big, like Of Mice & Men, Bring Me The Horizon, and of course, Avenged Sevenfold.

I just saw Pierce The Veil and Sleeping With Sirens in an arena in San Diego.
Yeah, perfect example. When we were on the way out or winding down, [heavy music] wasn't in the same state. I feel like people are hungry for what Atreyu does [now]. Our new shit rocks, man. I'm very, very proud of it. There's no melodic singing from me on the record. I can say that my vocals will not be Auto-tuned at all on this record. [Laughs.] It's just me screaming and yelling and fucking being aggressive. It's Brandon ripping vocals. It's good choruses and screaming and us working together. There are ripping solos and breakdowns. Some of the breakdowns—I don't want to say they sound “dated,” but to me they sound from a better time in music.

You could call them “classic?”
[Laughs.] I don't want to say “classic”… We're not trying to reinvent the wheel here. We're doing what we do and we're going to do it well. I feel like it's a mish-mash of all of our records. The stuff that we did in the major-label years? It's the moments of that I liked, mixed with all of the best of our old stuff.

The New Wave Of American Heavy Metal—As I Lay Dying, God Forbid, Bleeding Through, Shadows Fall—those bands are gone. Throwdown isn't touring. Avenged Sevenfold and Lamb Of God graduated and became huge bands. How do you ensure Atreyu's continued relevance? And how do you ensure it's properly integrated into your life now, so you can avoid the burnout that hit before?
To be successful at something, I really have to want to do it and have my heart in it. I definitely feel like I have that feeling again. I'm hungry again to do this. That's what has made me something to contend with in the past. That's what I bring to the table. When I'm hungry, I want to get after it. I can get it going. That's where our band is right now. We had kind of lost that, toward the end. All of us. That sort of fire. I also realize what “too much” is now. The difference between 23 and 33 is knowing how much I can expend myself, and the difference between a good idea and a bad idea. It's easier to make those calls now. Our booking agent has a kid now; I have a kid now. Our booking agent understands what it's like to be gone. He doesn't want to put me out there for nothing. Everything we do is going to be worth doing. And when we show up to play, we're coming to blow the house down. ALT