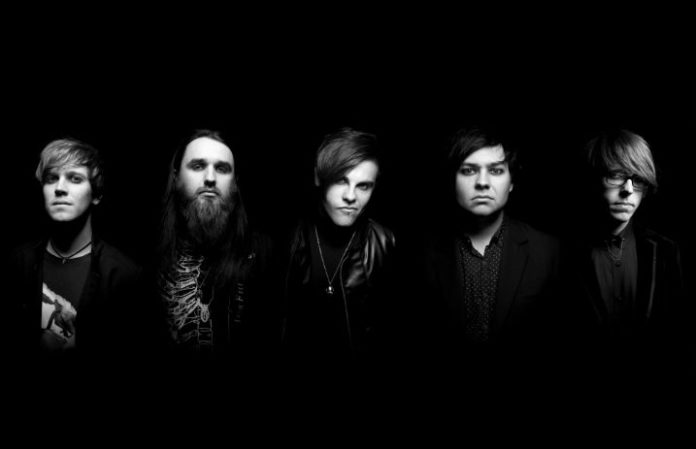 Five months after the release of their mini-album Bruises, FVK (aka Fearless Vampire Killers) reentered the studio in mid-March to begin work on material for the next era of the band. Having dropped their qualms about pleasing the industry or literally anyone but themselves, the band feel they have recorded two songs, “Always Forgive” and “Priceless,” that are the most themselves of all their work. They’re ready to usher in a new era that may be a little more funky than expected.

You went straight from your U.K. Bruises headlining tour to the studio, right?
KIER KEMP (vocals/guitar): Yeah, we like to keep busy. [Laughs.] We originally thought we might record some acoustic versions of Bruises. But, then, we were like, “Actually, I think we should do some new material,” so we ended up recording two new songs, which is better. We want to go in again. It just depends on the old moolah.

LAURENCE BEVERIDGE (vocals/guitar): Even though Bruises is our latest work, “Regret” is still, like, two years old. It doesn’t really represent us the way we are now, so we’re trying to get music that actually does.

Bruises doesn’t represent you anymore, so where are you going now?
BEVERIDGE: The music we’re into is a lot more rhythm-oriented or dance-oriented. I think it’s going two ways: Our music is getting a lot more frantic as well as a lot more dancey.
DREW WOOLNOUGH (bass/backing vocals): It’s hard to describe. The two songs display that dichotomy, solidifying two sides of FVK. One is much more rhythmic and stompy, and even has some elements of dark funkiness. The other is a lot punkier and frantic, but each side has been honed a little more than it has before. We’re getting more of a handle on what we want to do, so it’s gradually blending together a little bit better than before.

KEMP: And this time, it sounds a bit weird, but through being slightly ostracized from the rest of the music industry, we’ve stumbled across a kind of freedom. Coming around to these songs, we were like, “Let’s just literally do whatever we are excited about.” That’s quite liberating.

BEVERIDGE: I think Bruises came out of a very negative period for the band. We weren’t really happy as a whole about the direction we were going. I don’t think any of us were really that excited—except maybe Kier. We felt restrained. Whereas, when writing these songs, it was completely different. We made sure we sat and listened to all the songs we’d written, which was about 50. Out of those, we found two we really hung onto: One that I wrote [“Always Forgive”] and one that Drew wrote [“Priceless.”] All of us then had an input, changing and adapting them. My song went from being a ballad to being a heavy, fast punk song. It was a collective songwriting session, which we’d never done.

WOOLNOUGH: Both songs had almost a complete overhaul in style and tone, and that was because of that freedom. A lot of that came from [drummer Luke Illingworth] experimenting, and our leaving him to the drums and not saying, “Oh, we’ve got this thing in our heads, can you try to write something like that?” We’d say, “Think of something cool, and we’ll do that,” and the songs completely changed. That was the way everyone treated their parts. [Guitarist Shane Sumner] brought some great riffs, which we didn’t always have room for, but we adapted songs around them.

“I think now that we’ve kind of taken the guitars back, we can bring synths in a little more. Synths just sound cool. We really like the Drive soundtrack and stuff like that.” —Beveridge

Is there anything that happened from releasing Bruises to your going into the studio that was informing your writing?
BEVERIDGE: I think just the struggle of being in a band. Being in Fearless Vampire Killers, you just kind of take every day as it goes. It got to such a point that we had just had enough caring about the business side of things.

WOOLNOUGH: It’s that frustration of waiting around for someone who’s supposedly important to tell you that you’re important. I think we’d had enough of that.

BEVERIDGE: You just think, “Why do I care anymore? Let’s do it for the music.” I think once we focus on our music a lot more, things will just happen. We’re excited about the music, and I think people will understand that and take it onboard.

So much of your story so far has been painted by that. What does the next chapter hold?
BEVERIDGE: We had quite a shock recently. We lost someone really close to us, and I think that helped put things into perspective. I think the most fun we have is on tour, and all we want to do is be in a position where we can just play as much as possible.

KEMP: There are bigger problems. We don’t want to sound like whiners, like, “Why aren’t we rockstars signed to a label?” when there’s real shit going on. Life is so fragile and can end so quickly, and we’re just lucky in so many ways.

BEVERIDGE: We’re lucky we’ve been able to self-sustain for so long.

WOOLNOUGH: We’re ambitious, and being self-critical comes with that. That can have a positive effect by making you want to do your best, but also can make you very negative about yourself and what you’re doing. Sometimes we’ve lapsed into that—both bitterness and weird self-loathing, thinking we’re too good for stuff as well as thinking we’re shit at the same time. It’s very up-and-down. We’re just trying to enjoy it. When you enjoy it, you do get the best results.

A lot of what you were saying earlier takes me back to the Unbreakable Hearts era, when you were trying to hone that rhythmic vibe and hold back but still be yourselves. Does it feel like you’re still improving on that?
BEVERIDGE: We’ve done something I feel is unlike anything we’ve done before. With Unbreakable Hearts, while it was kind of honing ourselves, it was more honing structures of songs—not necessarily the sound, which is why it sounds like it could be 10 different bands. With Bruises, we were trying to almost remove everything about FVK, and almost strip it back and leave nothing except the song, which also didn’t work. When we play a lot of the songs live, they don’t feel quite as fun to play. With these new songs, we were like, “Let’s forget what everyone wants us to do. Don’t even think about what the fans want. Only think about what you think is the best.” You can’t spend your time thinking about what other people want, and I think that’s what we did with these songs, and they’re the best-sounding songs we’ve ever done—except maybe “Regret.” [Laughs.]

“Although we’ve probably had our best success with the song “Regret,” which is definitely the best song we’ve ever written, hands-down, it still wasn’t really us.” —Beveridge

BEVERIDGE: And, by “rhythmic,” we’re talking about going really quite funk-ish sounding. We’ve really taken it to a different place. We’ve become a lot more synthy. When we’re getting hyped up to play a gig, we’re listening to Dirty Loops and Chromeo. That’s the sort of music we enjoy listening to, and we enjoy playing that stuff, as well. We enjoy being able to get into the groove. And on the other side of the coin, we enjoy being able to rock out. The good thing about funk and punk—other than that they rhyme [Laughs.]—is that they’re very similar. Funk is very simple, although it sounds technical. It’s the same with punk. You don’t really have to think about it. We don’t want to play music that we necessarily have to think about too much. It just needs to sound big and needs to feel right.

KEMP: Sounds Good Feels Good. [Laughs.] Don’t expect a fusion funk album. It’s more sort of the way Muse does it. It’s rock, but it’s got a groove to it.

Was there a theme or a lyrical direction you took?
BEVERIDGE: On my side, Bruises is a prelude to what we’re doing next, setting up a fictional town in my lyrics. Drew and I have been talking about—in his lyrics as well—the idea of an inverted version of our hometown [Beccles, U.K.], because that’s where it was all written. It’s out in the marshes in the middle of nowhere. A lot of weird feelings surrounded our hometown— one of the little lanes is called “murderous lane.” We’ve got arguably the most haunted house in Britain in our town called Rose Hall [also known by “Roos Hall” or “Rhoos Hall”.] In my head, I needed a place to set all these horrible, dark stories that are the songs, and a folklore of its own started to form about this Watcher guy in this horrible house on the edge of the cemetery where all these murders are committed. It became this really in-depth story I can’t get rid of now, so I’m setting it in that world, and all my songs are going to be various eras in this house through modern history.

So continuing with the house from “Aging Love?”
BEVERIDGE: Essentially, the Watcher [from “Aging Love”] is the spirit of this witch [who was burned down in the house.] They rebuild this other house on top of it, and then all of the stories happen throughout the generations. “Aging Love” is one. “Like Bruises” and “Stepping Stones”  also happen in that town. The new song, “Always Forgive” is set in this house 20 years before the Watcher. This witch possesses the spirits of men over years as revenge, and makes them act out horrible things. In this town in the story, there are dark feelings, and all the songs [on Bruises] are about nasty stuff. There’s a lot of anger in Bruises, and that’s definitely going to carry over to the new stuff. It makes sense to put it in this place because you can be so real, but at the same time just have an eeriness about it.

KEMP: And the other song is called “Priceless.” Overarchingly, though, our brief was always [exploring] the darker side of humanity. All these songs vaguely end up falling within that. And both of the songs are dark regardless of all the other stuff we’ve said about funk and electronic stuff: The brief has always been to at least have a melancholy. Nothing on here is upbeat [emotionally.] It’s upbeat, but nothing is optimistic, necessarily. We wanted it to have a certain tone, not because we like being miserable. We just wanted the songs to share a tone. Even though I think the songs are quite different in many ways, they both have got these melancholic guitar lines in them, dark lyrics, and are introspective. That’s the overarching theme.
WOOLNOUGH: And “Priceless,” was inspired by Mad Men, so that’s pretty cool. Everyone likes Mad Men.

Though the band have no solid release schedule for the songs, Kemp says they do not want to sit on them too long. If all goes according to plan, you may hear at least one of the tracks by summer. ALT