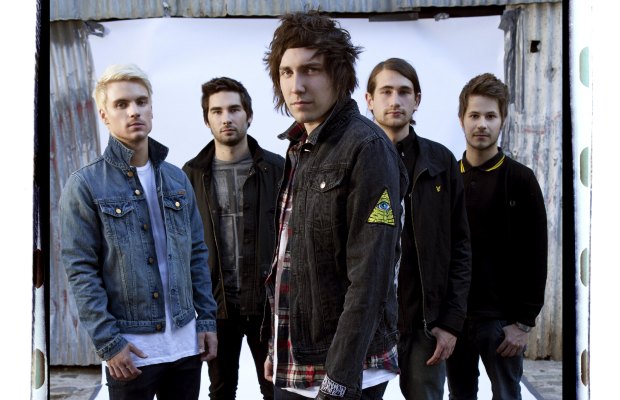 You Me At Six put the finishing touches on their third studio album at a friend’s studio in the U.K.—long-time collaborators John Mitchell and Matt O’Grady helped the band “mix [the album] and put it all together,” says vocalist Josh Franceschi. YMA6 recorded the album in Los Angeles with producer GGGarth Richardson (Gallows, Atreyu, Melvins). Spending two-and-a-half months in California with a big-name producer naturally affected the still-untitled album—although not in the way you might think. AP caught up with Franceschi as he was enjoying a day off from the studio.

What was it like recording with GGGarth Richardson? He’s done so many huge records.
We’ve always done our albums with pretty much the first guy I ever recorded with, John Mitchell. We’ve never really worked with any other producers. We’re a very hands-on band, so we’ve always kind of, I don’t know, almost recorded it ourselves. This was slightly different, because Garth has this huge team that comes in. When we were doing the drums, we had two or three different techs at one point setting everything up and being involved with getting the sounds right. For us, it was a new experience.

We did pre-production with GGGarth—again, we’ve never done that before, either. It was interesting, playing through the songs. We heard horror stories about American and Canadian producers—[some would] come in and tell a band they [couldn’t] play their instruments properly or they didn’t have the right songs, and [they would] basically try to strip the album back to the beginning and [make a band] start again. But it was different with Garth; he just came in and told us what he thought was good and not-so-good, and we bounced ideas around on how to improve certain songs. There was only one song which we drastically changed, where we completely rewrote a section of the song. Other than that, it was just stuff like, “Oh, add on another chorus” or “Add on an extra bar in this verse,” or “Change where you playing that guitar part because it’s clashing with the vocals.” It definitely comes through in the album that we thought way more about the songs.

If you’re used to doing things pretty much on your own, I can imagine what a big adjustment it would be to have other people help.
Everyone’s got a different story of how their record was, and what it was like recording. It’s weird having people who have even recorded with the same producer, and [they have] completely different takes on it. We really didn’t know what to expect. But we knew we wanted to challenge ourselves. It’s kind of one of the reasons why we didn’t record in the U.K.; we wanted a bit more of an experience. We thought by recording in Los Angeles, it wouldn’t just be a different recording space and different recording experience, but also a life experience.

The whole L.A. thing was just because, our label [was like] “Hey, ideally, where would you like to record?” At first, they wanted us to record in really secluded places in little houses in the forest and stuff. [But] we’re the kind of band if we lived with each other all in a place where there’s no life around us, we’d probably end up killing each other, because we all need to be out. We’re very social, so we need to be out and around other people. That definitely comes out in the record. At times, we took it very seriously, and we knew we wanted to push ourselves. Other times, on other tracks, it’s a very relaxed kind of feel.

What else is standing out to you in your new music?
It’s one of those things where—and I don’t want to trash-talk other bands—but it feels like a lot of people that are releasing music at the moment are just going with what’s connecting with fans at that particular moment in time. Especially on Warped Tour, it’s very all about the heavy music and bands that play synthy stuff within their songs. Everyone’s trying to do that, and they’ll just produce one song but just regurgitate it 12 or 13 times on the record. Some of our favorite bands are Brand New, Taking Back Sunday, Jimmy Eat World and Incubus, bands that when they approach a record, always try to give a different spin on their band.

[On] our first record, Take Off Your Colours, we just wanted to be like our favorite bands at that moment in time, whether it be Fall Out Boy or whoever it was. That’s really painfully obvious looking back at that record. The transition for that to Hold Me Down, our second record, is leaps and bounds in the sense that we’re trying new stuff and we’re showing off our different skills. This record, we’ve got songs that sound quite heavy and quite rocky, [and] then other songs that are just straight-up rock- and guitar-driven. And then we have some songs that sound like Coldplay and Mogwai and the latest Brand New stuff. It’s really strange, but it all makes sense.

For example, we have Winston McCall from Parkway Drive and Oli Sykes from Bring Me The Horizon on two separate tracks. I know we’ve always known that we liked heavy music; some of our favorite bands are stuff like the Ghost Inside and Parkway Drive. We’re not necessarily into the music that we produce, if that makes sense. Growing up, the bands I loved—and still do love, to an extent—were stuff like the Starting Line and Homegrown and all the bands on Drive-Thru Records. But since we’ve gotten older, the genres of music that we allow ourselves to enjoy have become more and more expansive and bigger.

On this record, we’ve taken the guitar-driven, heavier aspects of the band, and they’ve come to life because of those guys featured on the tracks. If we get the right tours and we work hard, especially in America, I feel like this is the album that is really going to bring us to the forefront as a band people should know about. And hopefully people should enjoy. That’s kind of our aim with the record.

Are there any emerging lyrical themes standing out to you?
It’s probably the most honest record we’ve done. There’s stuff on there I never thought I’d write about. What I found interesting is I didn’t really write any lyrics until we got to America. I decided while [the band] was tracking drums, bass and starting guitars that I was going to be at our apartment and sinking my teeth into the demo tracks we had and singing along and writing lyrics. I’ve never done it like that before; I’ve always written lyrics and melodies while [we were] writing and coming up with initial ideas. Essentially, I was sinking my vocals into what the music had already done itself.

Lyrically, I’ve always tried to write about what I know and what I’ve experienced. That’s maybe where we’ve really taken off, whether it be in Europe or England or Australia; people have connected with us because they can relate to what we’re talking about. It’s a very personal record, but I haven’t written or sung about anything that I’m not worried about people hearing.

In that sense, it’s nice; it’s therapeutic. The main thing that stands out for me and the rest of the guys in this record is that we’ve just stuck to our strengths and tried to build on them. We have the upbeat rock sound, stuff people can jump up and down to and have a good time to, but we’ve also tried to show we can dig a little bit deeper and we can slow things down if we want to. It’s a really interesting take on where we are as a band now—and the kind of music we’re writing.