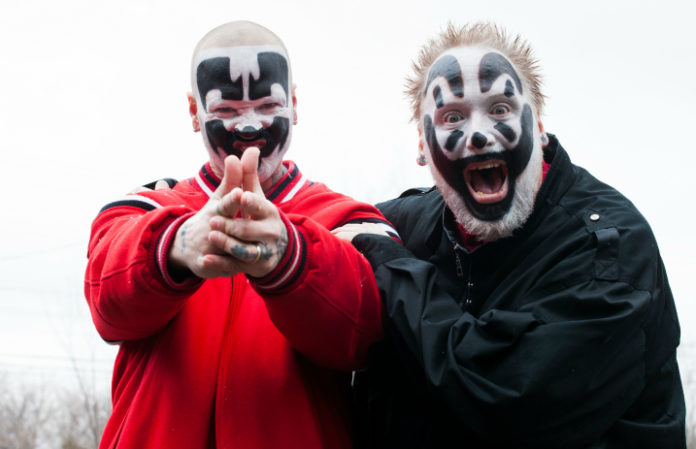 Imagine being labeled a gang member because of the music you like, or getting singled out by law enforcement for having a tattoo of your favorite band: That’s the civil rights issue currently facing infamous horrorcore duo Insane Clown Posse and their close-knit legion of fans, known as Juggalos.

Read more: ICP are losing their fight against the FBI

In 2011, the FBI’s National Gang Intelligence Center listed Juggalos as “a loosely organized hybrid gang” in a threat assessment profile. Attempts to overturn that classification (spearheaded by the group’s label, Psychopathic Records, and backed by groups of Juggalos represented by the American Civil Liberties Union of Michigan) have already been twice thrown out in court. Unable to find justice through the judicial process, ICP and thousands of Juggalos are taking the matter to the streets: The Juggalo March On Washington takes place Saturday, Sept. 16, on the National Mall in Washington, D.C.

“There’s people losing their kids in custody battles for being Juggalos, people getting denied military access, people getting fired,” says Shaggy 2 Dope, one-half of ICP along with fellow rapper Violent J. “Being officially listed as a gang by the FBI, we weren’t thinking about any repercussions from it. But after a year or so, we were hearing all these terrible stories from fans out on the road. And not just, like, one or two people—multiple people every day. We keep hearing all this crazy shit that’s going on because of it.”

Part of the FBI’s rationale for labeling Juggalos a gang seemingly stems from fans’ frequent display of the “Hatchetman” logo, the iconic emblem of ICP and their record label. The mascot is often seen proudly displayed as a tattoo on Juggalos, or emblazoned on official Psychopathic Records clothing. One Insane Clown Posse fan in Fredericksburg, Virginia—serving probation for a DUI offense—was listed as a gang member by her probation officer simply for the presence of the Hatchetman tattoo on her neck.

“We could put out a video or a record about it, but is the mainstream or anybody else going to pay attention to that?”

“We were like, ‘Fuck this, we’ll file a lawsuit,’” Shaggy tells AP of their initial pushback to the gang classification. “If we don’t do something about this, who the fuck is going to?” But after years of justice system dismissals, ICP are ready to make the case for their fans in the most visible way possible. “What’s the best way to be heard?” asks Shaggy. “Yeah, we could put out a video or a record about it, but is the mainstream or anybody else going to pay attention to that? So, we’re like, what if we do a march on Washington? Isn’t that how everybody protests the disadvantages to their cause?

“We got to stand up and do something about this,” he continues. “A lot of people are calling it a publicity stunt, and we’re like, ‘Damn right, it is.’ Not to sell anything, but we’re trying to get as much publicity as possible to tell motherfuckers that we ain’t a fucking gang. We’re people just like you.” Muddying the waters, however, are certain Juggalos who do engage in crime; numerous individuals involved with gang-related murders and other illegal acts have insolently identified themselves as Juggalos.

Shaggy bristles at the connection: “Are there gang members that pump our shit and claim to be Juggalos? Of course there are. Does that represent every single fucking Juggalo in America? Not even close. If someone commits mass murder that listens to Willie Nelson, are all Willie Nelson fans a gang? It’s like calling Lady Gaga’s Little Monsters a gang.”

He has a point. Isn’t it negligent to make a categorical assumption that violent offenders’ attachment to a musical group designates that artists’ entire fanbase a crime organization? The late-’60s Tate/LaBianca murders, committed by the Manson Family under the instruction of Charles Manson, somehow took influence from the cult leader’s delusional love of the Beatles. Manson even termed his whole misguided, apocalyptic prophecy, “Helter Skelter,” after the Beatles’ song—it’s hard to imagine law enforcement officials labeling all Beatles fans Manson Family cult members.

Shaggy admits that the FBI probably won’t overturn the gang classification because of the Juggalo March. Still, he knows that Juggalos must make their voices heard and protest their police association with gangs. “It would be nice to get a letter from the FBI saying that they’re acknowledging that we’re not a gang,” Shaggy says. “It’d be great, but the chances of that happening are slim to none. This is just us standing up, the Juggalos standing up and being, like, ‘Yo, fuck you, too. We’re in this bitch and we ain’t a fucking gang.’”

“We’re in this bitch and we ain’t a fucking gang.”