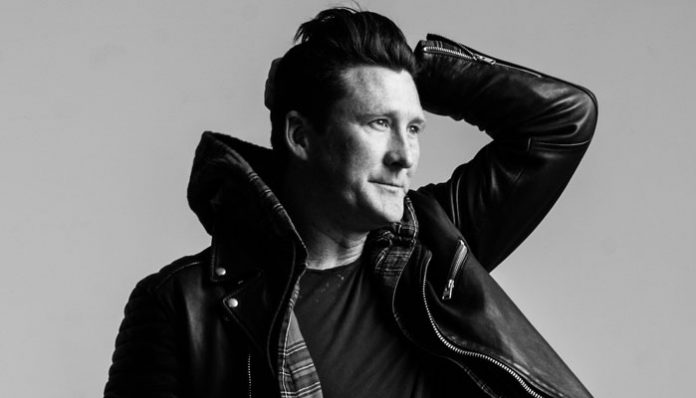 At first glance, one might think that Stephen Christian may have turned a scary corner. TENSION, the impending album from his solo project Anchor & Braille, portends a sea change. The perpetually posi singer has delivered tracks with titles such as “DANGEROUS,” “MADNESS” and “PHANTOM PAIN.” If it weren’t for the curious LP cover, we may have thought the former Anberlin frontman went metalcore on us.

It turns out that TENSION is anything but tense. Christian’s new record works the seam between straight-up pop music and electronic soul. The irony of releasing a new single titled “CLOSER & FARTHER” during a pandemic isn’t lost on Christian. But the song’s uplifting vibe and smooth groove is all about comfort, as opposed to winding up the doomsday clock. TENSION is an admirable offering from the singer, much more in line on a playlist with Justin Timberlake or the Weeknd than anything on the Johnson & Johnson stage at Warped Tour.

As engaging and accessible as Stephen Christian’s new music is, he doesn’t have any master plan at work. His only desire is to get it out into the world and have people hear it. Despite the quality of TENSION, he has no hyper-driven ambitions to be on the road forever or engage in the promotional circus involved. Who makes a patently commercial record and doesn’t follow through with the job?

By removing himself from the necessities and dictates of the music business, Stephen Christian found joy in music again. He spoke with AltPress about his motivations and attitudes toward the music, as well as the soul-destroying aspects of the industry he has no use for.

The new Anchor & Braille record has the ominous title of TENSION. It has songs with similarly foreboding titles as “TETHERED,” “DANGEROUS,” “EVENTFUL HORIZONS” and “MADNESS.” The new single is called “CLOSER & FARTHER.” And it still feels like a breezy summer record. Are you making a commentary?

STEPHEN CHRISTIAN: I had no idea that a pandemic was around the corner. [Laughs.] The irony is not lost on me. The ironic part of creating the record was that I was hoping to give everybody a carefree moment. Life is full of tension, and life is full of danger. And then when you get to this record, like you said, it feels very carefree and whimsical. That was the tongue-in-cheek motive behind the title of the record and the song. Especially with a song called “DANGEROUS.” Suddenly, the first note hits, and you’re like, “I don’t even sense any type of danger in this song. There’s nothing lurking in the shadows.” Hopefully it gives somebody a smile [and] some kind of a deeper sense of a deep breath. That’s the whole premise behind the title.

TENSION is a lot of things. It’s a pop record with a cosmopolitan sophistication to it. It’s not a wild, go-crazy night out with your friends but more like a date night.

I can see that. For me, I play a movie scene in my head for each record. For the last Anchor & Braille record, it was called Songs For The Late Night Drive Home. And I basically gave you the scene in my head. The movie’s theatrical trailer that played in my head while creating that record. And so [for] this one, honestly, ironically, I was thinking about somebody in their apartment by themselves, having this record on and just dancing by themselves. Ironically, again, it’s just one of those things where it came to fruition without me even planning it.

It’s really a contemporary pop album. But I’m not saying “pop” as a pejorative term.

The funny thing is that pop is some of the hardest music to create because, on many different levels, I feel like every scene has largely been taken. So I don’t think it’s insulting to call TENSION “pop.” When inspiration hits like it did on this record, it is effortless. But [for] the songwriting itself, I think when you’re passionate about something, you want to pursue everything you’re excited about, and you’re ready to take on any type of challenge. Someone said, “If you’re passionate about your job, it’s not a job.” So it didn’t feel like a job, and it definitely didn’t feel like it after. It was just so much fun.

There wasn’t any kind of deadline or tension. You could completely immerse yourself in the process. Not a lot of people can feel that.

100%. The evolutionary step for a band or a musician is that it starts out with a hobby to boost your passion, then boost your profession and [maintain] the profession. I don’t care what people say: There’s something about being a professional that chokes the passion out slowly over time. Because now you have mouths to feed and lawyers and booking agents and all those people you don’t want to let down. Your tourmates, your fans and all that stuff.

So now it’s so simple [because] it feels like it’s a joy to create music again. It is an absolute joy because I have a zero pressure surrounding it. I have zero pressure from a label or anyone else. I can just create the overflow of what my mind thinks of. I can put down on Pro Tools, and it could take me a year to finish a song or take a week. It just doesn’t matter.

We’re defining “professional” now as having a significant network in order for you to do things. In the scene that Anberlin came up through, do you think bands gave up because it wasn’t happening for them fast enough and they lost their interest?

I don’t think it’s just [about]any particular scene. I think I’m talking [about] musicians as a whole. It’s not an Anberlin thing. It’s not a scene thing. It’s just being a musician. A lot of them change who they are in order to succeed. A lot of people succumb to that pressure. And I wasn’t willing to do that on a lot of stuff just because of everything, from how I was raised to hoping that I was somewhat of a man of character.

It’s been a while now, so I can talk about it. One year [ago], [Anberlin were] at a party in New York City. We had a sold-out show. We had just signed with a particular label. And the president of the label comes up to me and says, “Hey, man, we’ve got to market this first record we’re putting out. So do you want to date a celebrity or get arrested?” And my wife is standing right next to me. We had only been married for less than a year. She’s just completely distraught. What are we going to do at the end of the day? I was like, “Well, I’m not doing either.”

Perhaps Anberlin could have made some better money if I could have pissed on the Alamo or if I would have dated Taylor Swift or whatever. But it’s not worth it. That’s probably not the first time that person walks up to [a band] and asks, “What are we going to do for marketing?” It’s just marketing. And sometimes it gets the best of them. And we have premature deaths. And that’s sad. And sometimes it’s premature changes to careers because people just aren’t true to themselves.

There’s a lot of what being a professional requires, a lot of sacrifice and a lot of passion. It takes out a lot of the humanity. And at the end of the day, if you’re not willing to sell your soul on a couple of different fronts, who knows how far you can go? But when you achieve it, I don’t know. Are you truly even alive to experience the mountain top that you’re on?

That’s a very good question. I think a lot of people delude themselves into something. When it comes to your art, it’s good that you’ve maintained ground rules.

It’s absolutely honest. I’m under no grand illusion. So I’m not going to tour the world over 10 times. I’m not opening up for Ariana Grande anytime soon. I think people could just see that [TENSION] feels authentic. This feels like somewhere deep down, these songs are the small passion projects that I’ve created.

TENSION will be released on Tooth And Nail May 22. Listen to “Closer And Farther” below.