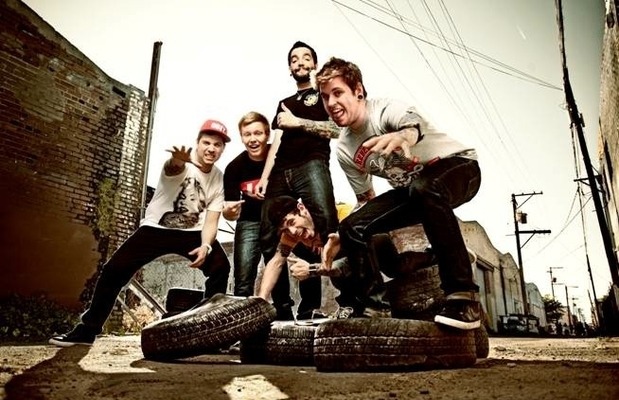 A Day To Remember have been on an upward trajectory since the release of 2010’s What Separates Me From You. By all accounts, they stole the show at Warped Tour and have been filling bigger and bigger rooms across the rest of the world. As they're about to head into the final leg of their two-year world tour, the band are beginning to turn to new material to keep their considerable momentum building. Frontman Jeremy McKinnon checked in from London and told AP about the band's plans for new music, how they’ll win over Rise Against's fans on their early 2012 U.S. tour and why they keep politics away from their lyrics.
Interview: Tom Goodwyn

So what's happening next for A Day To Remember? Lots more touring?
After this [U.K.] tour, we've got a week-and-a-half off and then we're doing a short tour with some radio events. Then we've got six weeks off before we start touring with Rise Against across the U.S. Then we're doing Soundwave in Australia and then we're coming back to Europe for some summer festivals. After we're done with that, we're going to go straight into recording a new record.

How much new stuff do you have written so far?
I write constantly, and I've been writing constantly for the course of the two years we've been touring, so I've got a ton of ideas for new stuff. The folder on my external hard drive, which I demo on, is pretty massive now, and I'm really happy with what we have so far.

Is the new material in a similar vein to What Separates Me From You?
I'm not sure. Like I said, we've not put them all together yet as a band, so it's hard to say. At the moment, it's just me writing songs, and then we'll break them down from there and add things here and there to make it A Day To Remember record. We're never going to be a band who feels like they've got to change their sound drastically to fit with what’s going on; we're not interested in that. I'm interested in playing heavy music influenced by pop-punk and pop music. There's no way we could write the same record over again, because we're five bands in one, and that always comes through. So it'll be the same band, but one that's branching out a little bit more and still playing the same kind of music.

What about in terms of lyrics? Is there anything that's inspired you that you'd like to capture?
Whenever I write, I write about what's going on with the band and in my personal life, so I absolutely know what I'm going to talk about on the next record.

You've never wanted to take on politics or anything like that?
Not right now, it's not where I am in my life. If I was going to do that, I'd do it somewhere that wasn't an A Day To Remember record. I'm big on keeping things separate. If I want to write a political record, a space-rock record or a country record, then I won't do that with A Day To Remember.

Do you ever think about doing side projects?
Sure. I'm always writing, and I never write for one specific thing. I've got so much stuff this time around, there will definitely be a lot leftover. I might do something with that, you never know.

You've got the Rise Against tour coming up. How did that come about?
They've been hitting us up a lot over the last year, and they really wanted to tour together. I think they're one of the only bands who really understand what we are and what we're trying to do. From here on out, it's a big deal for us to have a bit of production and really put on a show. We're playing big cities and we're going to be playing with production. They understood that, and they've accommodated us, and they really get what we're going to do. We all really love that band, so it's going to be a great tour.

Do you think your fans are their fans? Or will it be a chance to win some new ones over?
Absolutely. It'll be a chance to win people over. They've done so well on the radio and that's just getting started for us. We're on after the Menzingers, who are great, but we're very different from them and Rise Against. I think Rise Against's fans are mainly adults and our fans are a lot younger, so I'm looking to seeing all these adults watch as loads of kids level the place. I can't wait.

You picked up a bit of attention for your covers of Kelly Clarkson and the Fray. What other songs would you like to cover?
Covers are getting so popular amongst younger bands, and it's a big way for them to get attention, so we don't want to rely on that. But if we were going to do one, we've been talking about covering the Mighty Mighty Bosstones’ “The Impression That I Get.” I think we’d do such an awesome job of covering that.

Given the amount of success you've enjoyed recently, have you noticed any bands that have copied your style suddenly coming along?
I've heard of bands here and there that sound like they do some things that sound like us. But here's the thing: I've never heard of a band who I honestly feel really gets it when it comes to our music. We're not just one band—like I said, we're five bands in one.  Anyone who tries to do what we do just ends up focusing on one particular part of what we do, so it's not that there's ever a band who sound like an A Day To Remember knock-off. I've never heard a band who've made me think, “Wow, they sound really similar to us,” because we do a lot of different things. We draw from a lot of different places, and I think that's why our band does so well. There aren't many bands who can go on tour with super-heavy bands like the Acacia Strain or Parkway Drive and then come off it and go straight on a New Found Glory tour and get the exact same response. Most bands can't do that. We're lucky. We've always been this band who stick out as being a bit special, but who can fit in anywhere. alt